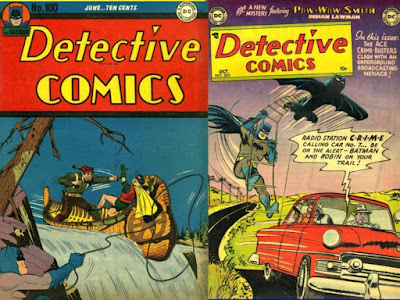 Starting a celebration of every 100 issues of Detective Comics, where Batman began back in May, 1939. 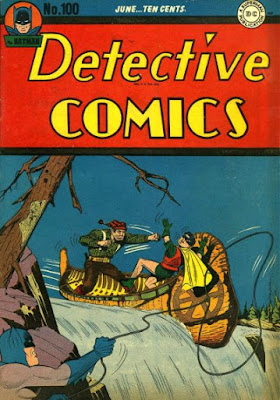 The first of these special issues was Detective Comics #100 (June, 1945) with a cover by Dick Sprang.

This issue features the main story of "The Crow's Net Mystery", by Don Cameron, Jack Burnley and Charles Paris, where Batman and Robin raid a fence's hideout to find two smugglers, one of whom shoots the other to escape.  Trailing the murderer to the Crow's Nest, the Dynamic Duo encounter mystery writer Reginald Scofield lives.  Batman deduces that this is where the smugglers operated from, and finds Scofield's butler to be their leader, which all gives Scofield a new idea for a story!

Other features in this issue include Air Wave, Three-Ring Binks, Slam Bradley and the Boy Commandos! 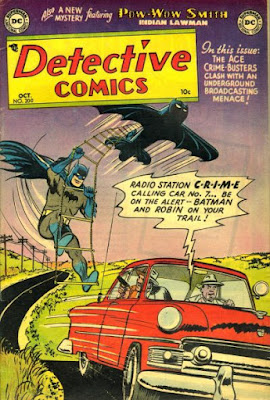 J. Winslow Mortimer was the artist who rode the radio waves to give readers the cover of Detective Comics #200 (October, 1953).

Here, Batman and Robin had the Batmobile tuned to "Radio Station C-R-I-M-E" in a story that had no identified writer, but with art by Sheldon Moldoff and Charles Paris.  This time around, criminals in Gotham were being aided by a radio station that broadcasted the locations of the police, allowing them to commit crimes.  The Dynamic Duo tracked down the mobile radio station after an attempted plane hijacking and parking structure hideout, finding the leader, who got the information by lip reading conversations at the Gotham City Police Department.

The other features in this issue included Roy Raymond TV Detective, the original Robotman and Pow-Wow Smith. 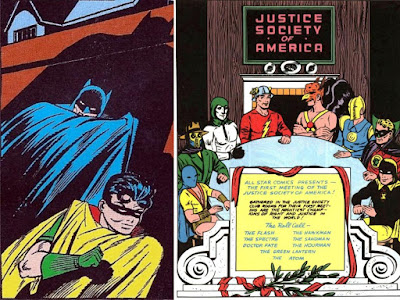 Both Detective Comics stories featured the Batman and Robin of Earth-2 (basically, the Batman who was a member of the Justice Society of America, instead of the Justice League of America, with a grown up Robin joining the JSA much later, having never appeared in All-Star Comics during the original 57 issue run).

You'll notice that these issues don't quite come out at the same time as Superman's Action Comics #100 and #200, and the rates of growth and their variations between Action and Detective are covered here!


Come back as the countdown to Detective Comics #1000 continues...
Posted by Dave's Not Here Comic Blog at 4:30 AM