The Secrets Of Superman Island 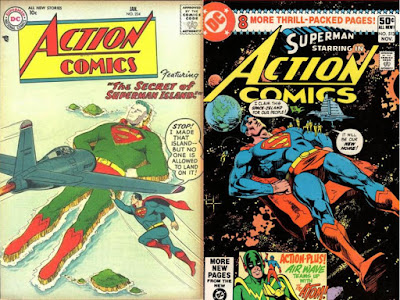 John Donne once stated in a poem that "No Man Is An Island"....but, to be honest, he didn't likely meet Superman.


Superman did indeed have an island, which he and others visited twice, and here are those stories.


The Secret Of Superman Island 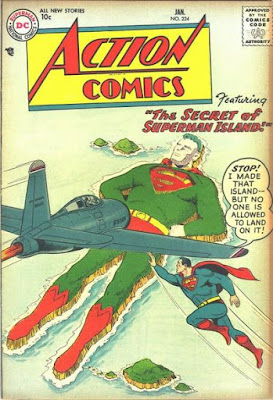 It was Superman who created Superman Island in Action Comics #224 (January, 1957) by Ed Hamilton, Wayne Boring and Stan Kaye, all under a cover by Al Plastino....but no one knew why, and Superman wouldn't let anyone land there to find out.

Lois Lane, always curious, looked into this, and found Professor Vanley.  To verify her theory, Lois hires some men to take her to the island, but, they were Guy Blisher and Norton Larch were criminals, and wanted to break into a vault on the island, having injured Vanley before they went.  Lois tells Superman of the criminals and what happen to Vanley, and Superman leaves the crooks, takes Lois off the island to check on the professor.  Professor Vanley was fine, but he explains to Lois that he had thought he had found a way to get energy from Green Kryptonite (but he was wrong), and Superman stored all the Kryptonite he had gathered here to keep criminals from using it against him.  After the police take the criminals away in helicopters, Superman throws the island (and its store of Kryptonite) into space. 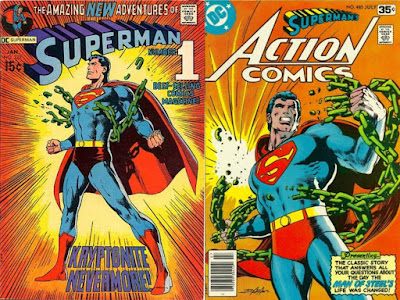 Years after this, an experiment turns all Kryptonite on Earth into lead (see Superman #233 of January, 1971), a story which has been reprinted many times, including in Superman in the Seventies and in the Millennium Edition: Superman 233, but Action Comics #485 of July, 1978 has a few extra pages, as well as a new cover by Neal Adams.


The Return Of Superman Island 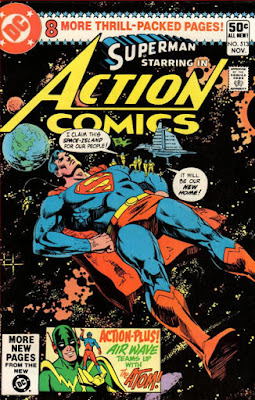 Superman Island is found again in Action Comics #513 (November, 1980) by Marv Wolfman, Curt Swan and Frank Chiaramonte (well, they related the story of it being found again, all under a cover by Ross Andru and Dick Giordano).

S.T.A.R. Labs had observed that Superman Island was returning, as reported by Bill Logan and Lana Lang of WGBS.  Lois checked with the prison warden, finding out that Blisher and Larch had been recently released, and were living in Suicide Slum.  At a local bar, Blisher and Larch were bragging about knowing about Superman Island, which got them captured by H.I.V.E. agents (Hierarchy of International Vengeance and Extermination), who learned of the Kryptonite in the island, and killed the two criminals.  Superman, having finished a volcanic emergency, went to stop a H.I.V.E. missile from breaking the orbiting island open, but failed, being hit by a shower of Kryptonite.  A H.I.V.E. ship picked up the Kryptonite, as well as Lois Lane, as Superman was fished out of the ocean by a tractor beam from Superman Island.  Superman was cured of his Kryptonite poisoning by the Krell, an alien race who lost their own world, and settled on Superman Island, using the Kryptonite as a power source.

They provided Superman a temporary shield against Kryptonite, allowing him to attack the H.I.V.E. base and free Lois, but he was unable to find the Kryptonite. 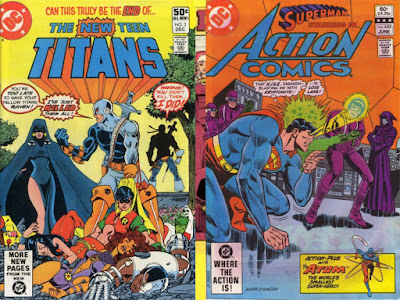 Superman then threw Superman Island (with the Krell) towards a planet they could inhabit, where they wouldn't need a Kryptonite power source.

The H.I.V.E. would return, tricking Deathstroke the Terminator to attack the Teen Titans after a recent reformation, as well as menacing Superman and the reporters of the Daily Planet again.
Posted by Dave's Not Here Comic Blog at 3:30 AM