Superman Visits Batman And The Outsiders For Christmas 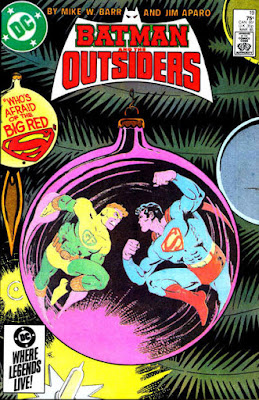 ...sadly, this wasn't a casual social call, or even singing of Christmas carols, but something a little more serious. 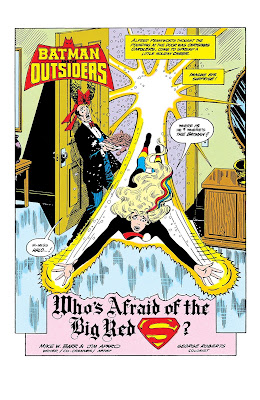 Halo rushed into Wayne Manor to get help from Batman (Bruce Wayne), and after a bit (where she recalled her own personal exchange with Geo-Force), explained that he had gotten a call from a fellow graduate student, one Denise Howard, who had taken too many sleeping pills.   Geo-Force rushed to her rescue, to get her to safety, and found out that Denise's professor had been trying to take advantage of her, only offering her a scholarship in return for favors.  This enraged Geo-Force, who went off to handle the matter.  Fearing for the teacher's life, Halo came to Batman for help.  Batman said he would send a friend, and that Halo should go meet him (the other Outsiders were busy; Metamorpho dealing with his girlfriend, Sapphire Stagg, and issues with her dad, and Katana and Black Lightning dealing with a mugger taking on Santas as Katana misses Halo).

The help Batman called was his friend, Superman, who went with Halo to stop Geo-Force, as he was confronting the lech, working another student in his mountain cabin.  After a brief fight, with Geo-Force using his gravity powers to nearly match Superman, Batman arrived, finding evidence of this man performing this behavior before, and taking him off to jail.  Geo-Force then checked on the then recovering Denise (in his alter ego of Prince Brion), with her recovery being the start of a Merry Christmas.

This issue was a double Christmas treat, as, while Jim Aparo had drawn much of Batman and his family, as well as the rest of the DC Universe over the years, it was a rare chance for him to draw Superman, as well as a little of his supporting cast at the Daily Planet (Lois Lane, Jimmy Olsen, Perry White, even non-regulars like Melba Manton and Percy Bratten, all enjoying the Christmas cheer!).
Posted by Dave's Not Here Comic Blog at 4:22 AM