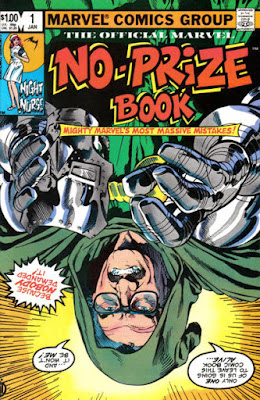 Stan Lee's contributions to Marvel Comics are many, but one of the biggest of the them all was the "No Prize" idea.


Stan started by just getting readers to write in, promising no prizes for his contests, thus insuring there would be no losers.

But, as letters to Stan increased, including in those letters were fans asking where their prizes were!

Then, it changed into getting a "No Prize" for writing in to spot errors in the books (and offering explanations), which you would be credited for in the letters' pages....but again, NO PRIZE. 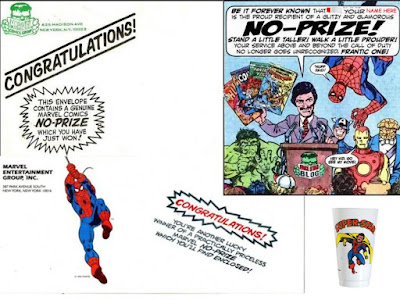 This still got the Marvel Bullpen letters, asking where their prize was...which resulted in the "No Prize" envelopes, sent to the readers who had sent in what they had noticed (and this caused more problems, as fans would write back, saying their prize fell out of the envelope....). 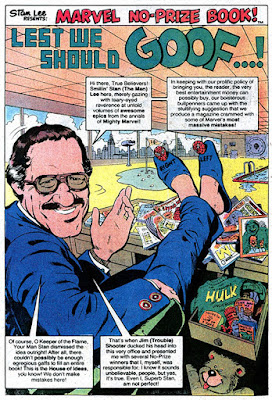 This even resulted in the Official Marvel No-Prize Book, which they published in January 1983, with a framing sequence by Jim Owsley, Roger Stern and Steven Grant, with art by Bob Camp and Vince Colletta (and a cover by Michael Golden), and various Marvel Comics mistakes and explanations inside in "Lest We Should Goof...!", back in a time when readers could take comics a little less seriously, and wish Stan Lee a happy birthday today!
Posted by Dave's Not Here Comic Blog at 4:30 AM