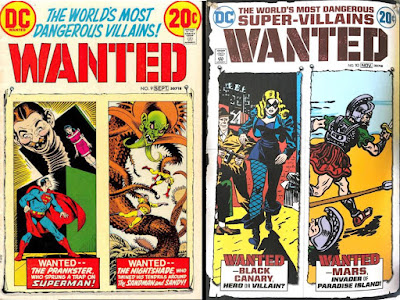 Here it is, the end of the run for E. Nelson Bridwell's Wanted: The World's Most Dangerous Villains, with villains for Superman, Sandman (these two under a Nick Cardy cover), Batman, Johnny Thunder and Wonder Woman in Prankster, Nightshade, Catwoman, Black Canary and Mars.

The series that ended in the 1970s because no one wanted Wanted (a line attributed to publisher Carmine Infantino at the time)  The last issue of #9, and the tenth issue.... 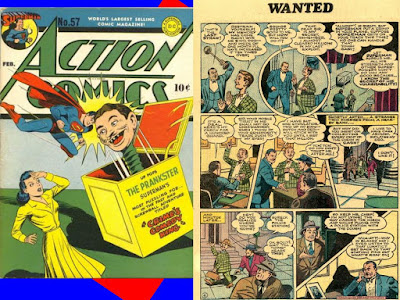 First up for the last issue of Wanted, is a Superman reprint from Action Comics #57 (February, 1943) by Jerry Siegel and John Sikela (with original cover by Sikela), featuring the return of the Prankster...

The Prankster returns by punking crime boss King Ruggles on his birthday, tormenting him with bad puns and even worse gimmick gags, but getting the King to give him $100,000 for the promise of over a million in a month.  The Prankster goes to withdraw $50,000 and promptly goes to the police station, and gives himself and the money up!  This gets a call in to Clark Kent and Lois Lane, with Clark changing to Superman to confront King Ruggles, then returning to police HQ to see Prankster leaving....where he stops the villain. 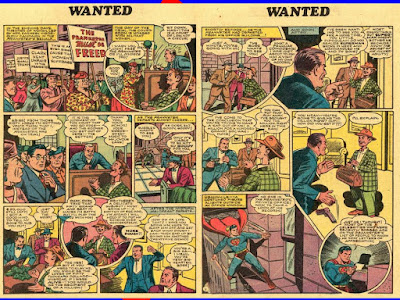 But, Prankster had been released, as he was donating the money to the preservation of ostriches, gaining favor with their supporters, who bailed him out (and turned on Clark Kent....and Superman!).  King Ruggles pulled the bailed Prankster in again, planning to rough him up, but gave him another $25,000.  Clark's editor assigned him to cover Prankster's new endeavor, Appreciation, Inc., that would show people gratitude that had made large donations to charity.  Prankster then got to meet and go to the homes of these wealthy individuals.  Oddly, these people then all saw major thefts.

Prankster reported back to King Ruggles with his million (his scheme fulfilled, as he got to be around the rich, he found ways to rob them).  Of course, Prankster only showed Ruggles the money, as he planned on taking it from him as well.  Superman shows up to stop all of them, but, a quick maneuver takes out Superman (!!!).  The King then plans to dispose of Superman and the Prankster, but Superman wakes up, saves himself, and captures Ruggles (but, the Prankster gets away....).

Prankster would return, with many more gimmicks to make fun of the Man of Steel!


The Adventure Of The Magic Forest 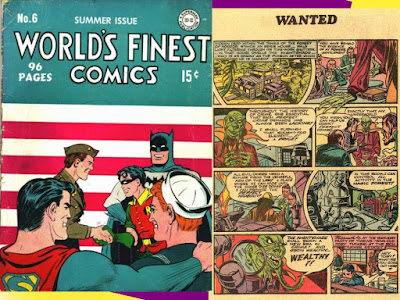 The last story reprinted in Wanted is from World's Finest Comics #6 (Summer, 1942) by Jack Kirby and Joe Simon, featuring Sandman and Sandy (though the issue has a Fred Ray Superman/Batman/Robin cover), featuring the debut of a new villain, Nightshade!


A married couple called the Tuckers and an unlucky explorer have problems in a forest, all observed by a lonely mobster.  This mobster goes back to the home of the Nightshade, who, now that someone knows his value, readies his plan to make criminals wealthy.  Meanwhile, back at young Toby Tucker's birthday party, the lad misses his parents who were suppose to be coming home, and tells his friend, Sandy Hawkins (ward to Wes Dodds, the Sandman).  Sandman and Sandy go off in search of the Tuckers, finding Nightshade's deadly forest, and are attacked by the plants there.  They also find some natural illusions, that lead people (like the Tuckers) to drive off the road.  Thankfully, the Tuckers survived, and the heroes have the police take them home. 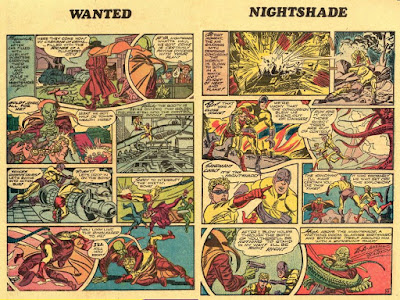 Sandman and Sandy go further into the jungle, facing more menaces, as well as mobsters, who were bringing Nightshade money (as he offered his home as a sanctuary to criminals, as the police wouldn't follow them in).  Sandman and Sandy fight the thugs in Nightshade's home, barely escaping with their lives....then the house blows up!  Nightshade planned to kill the thugs for their cash, and now plans to kill the heroes....until his forest seems to turn on him and kill him!  The heroes return to the Tucker party in their alter egos as the forest burns down. 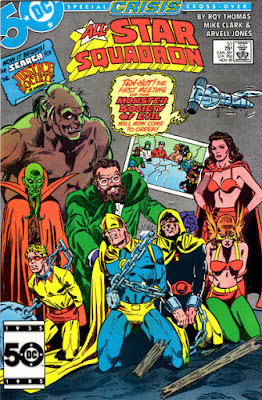 Oddly, Nightshade survived, and returning during World War II during the Crisis, in a few issues of All-Star Squadron (though he got a name change when he joined the Monster Society of Evil to face Dr. Fate and Hourman and more!  Even worked with a fellow Wanted alumni in Mr. Who!).

Thus ended the original run of Wanted, the World's Most Dangerous Villains....but previous issues had promised stories with Catwoman and Wonder Woman....so, as DC collected the original issues, they included a few "newer" reprints as well, including a mock-up cover as well (sadly, Nick Cardy is no longer with us, as he drew Black Canary, Wonder Woman and Catwoman all too rarely....).


The Sleeping Beauties Of Gotham City 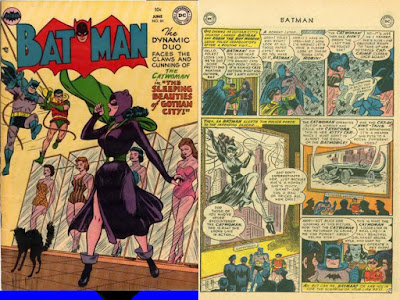 First up is a Catwoman story from Batman #84 (June, 1954) by David V. Reed, Sheldon Moldoff and Stan Kaye (under an original cover by Win Mortimer)...

...as Selina Kyle returns to face the dynamic duo of Gotham City.

In Gotham, it just rains cats....as Catwoman lets Batman and Robin know she has a new crime scheme.  Batman reviews Catwoman's career with the police (thinking that she has abandoned her good life as Selina Kyle).  But, Bruce and Dick find Selina entered into a five woman beauty pageant sponsored by the W. Ross Cosmetic Company.  Finding Selina's address their, Batman and Robin go to confront her, to find Selina ready for them (planning to sue for false arrest, as the duo have no proof she is Catwoman). 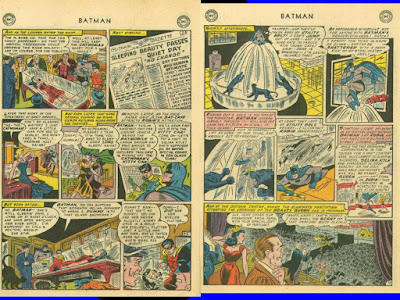 Catwoman tries a violin heist that night, and thwarts Batman and Robin's attempt to capture her working through the giant instruments.  Then, the duo discover Selina Kyle is now a "modern sleeping beauty",  having gotten a virus, that leaves her comatose (with the cosmetic company putting her in a glass case to use the suffering woman as a marketing ploy).  Catwoman goes to rob two more contestants (who then also fall to the sleeping sickness), all the while with Selina Kyle on full view (and faces Batman one more time), then only Selina remains for the beauty pageant....as she awakens.

As Batman smells the perfume she is to get as a prize, he realizes her plan....that she had European agents place valuables in the exotic perfume (which got past customs) so she could get her prize (and her ill-gotten booty).  She created a film duplicate of herself to fool the guards watching her sleeping body (having only dosed herself with a bit of the sleeping sickness)

Catwoman would return to face Batman again and again (and she even faced the next villain a few times as well....) 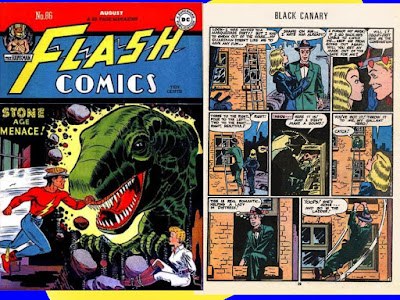 Next up, a Johnny Thunder tale from Flash Comics #86 (August, 1947) by Robert Kanigher, Carmine Infantino and Joe Giella (under an original Flash cover by Lee Elias and Joe Kubert) that introduced the villainess (yes, that's right) Black Canary! 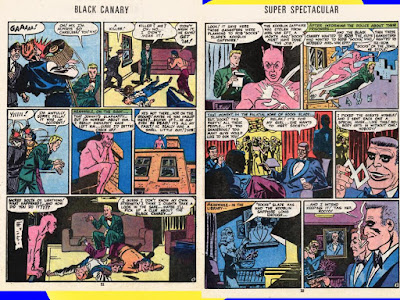 Say, you wouldn't think Johnny Thunder would be dumb enough to climb a ladder and rob a thug's apartment for a pretty lady, wouldn't you?  (You'd be wrong).  Johnny does, getting a special mask for the pretty lady (who steals the ladder as Johnny throws her the mask).  Johnny calls his Thunderbolt, but is pulled inside by the thugs whose mask he took.  Black Canary needed the mask to get into a special party thrown by Socks Slade (where special masks are the identification for admission).  There, she takes a jewel Socks stole, as Johnny and the T-Bolt wipe up the gangsters.  Black Canary escapes in the confusion (having also stolen Johnny's heart.....).


Black Canary would return, team up with Johnny, eventually replacing his thunderbolt, then Johnny himself in these comic pages, as well as taking his membership in the JSA!

The Girl Who Saved Paradise Island 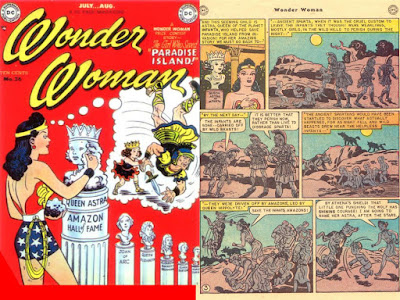 Last, but certainly not least, a story featuring Mars, the god of war, from Wonder Woman #36 (July-August, 1949) by Robert Kanigher and H. G. Peter (with original cover by Irwin Hasen and Bernard Sachs), adding to Wonder Woman's mythology.

Wonder Woman starts this tale with her mother and tales from ancient Sparta, where soldiers would leave baby girls to be eaten by wolves...yet Diana's mother, Hippolyte, and her amazons were there to rescue the girls, including Astra (who, even as a baby could defend herself).  The Queen took the babies to Infanta, the child planet, where the girls could grow up (a little, retaining eternal youth, yet also having powers as well, with Astra becoming Infanta's child Queen). 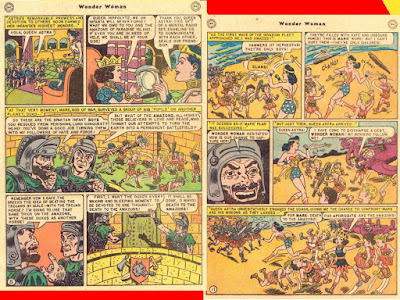 Mars, tired of the amazons, took the young boys of Sparta as his troops on the planet Duxo, and with the help of Lord Conquest, training them to hate the amazons.  Mars then launched his forces from Duxo, which Steve Trevor detected, seeing an invasion fleet coming to Earth (and notifying Wonder Woman), but that their target was harmless...in the middle of the ocean (but Wonder Woman knew that to be the home of Paradise Island, so she went to defend it).  Mars' boys were able to defeat Hippolyte and her amazons, but Wonder Woman, Queen Astra and her girls were able to turn the tables on the boys of Duxo....freeing them from Mars, and taking them to learn the ways of peace on Infanta.

Astra, Conquest and Mars would return (in fact, all of them did in Sensation Comics #92!). 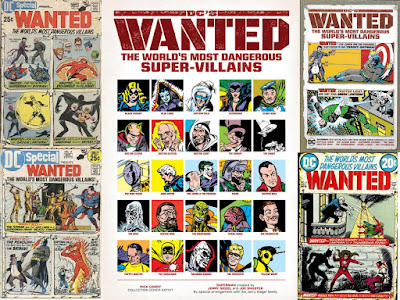 While the collection did not include the two DC Specials which led to the Wanted series, DC's Wanted the World's Most Dangerous Super-Villains recent collection did include the nine issues of that series (including the Trickster, Solomon Grundy, Dr. Light and Captain Cold (and more).

A wonderful tribute to lasting villainy.....and the love of comics had by E. Nelson Bridwell.

Posted by Dave's Not Here Comic Blog at 3:30 PM