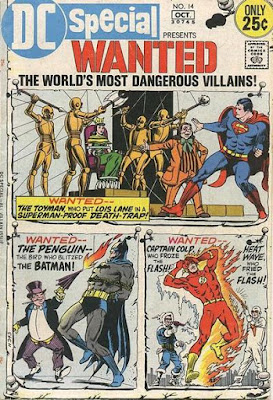 A second dose of Wanted -- The World's Most Dangerous Villains!


Editor E. Nelson Bridwell again went into the library of DC Comics, and pulled out a few gems, focusing on the foes of the main DC heroes of Superman, Batman and the Flash....


....and found the following tales for DC Special #14 (September-October, 1971), and put them under a cover by Murphy Anderson! 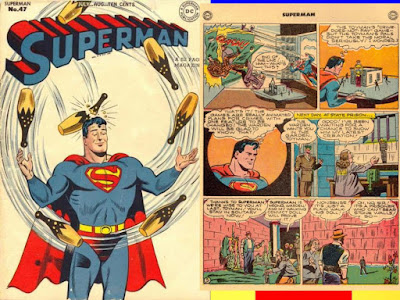 Superman #47 (July-August, 1947) by Don Cameron, Ira Yarbrough and Stan Kaye (originally under a Wayne Boring and Stan Kaye cover) starts off this collection, with Toyman convincing the warden in prison not to put him in solitary, but to make toys that will prevent crime.  But, the toys really detail how to commit crimes, and, then, help him escape.

On the loose, Toyman comes up with a new plan...to collect signatures from wealthy people under the guise of telling fortunes, yet really to forge their names on checks and deeds to him.  Lois Lane sniffs out his real plan, but is taken hostage, forcing Superman to rescue her from the trap he prepared for this occasion in his castle (a fiendish death trap, that Superman thwarts....with a jack-in-the-box!).  Defeated, Toyman is back in prison, breaking rocks this time.

The Heat Is On...For Captain Cold 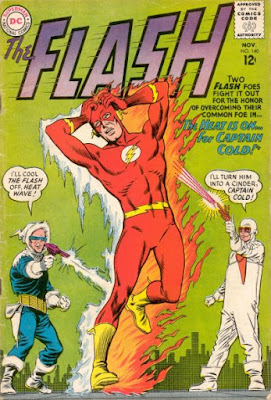 The second story from Flash #140 (November, 1963) by John Broome, Carmine Infantino and Joe Giella (with original cover by Infantino and Anderson) pulls double duty with the villains, returning Captain Cold and introducing Heat Wave.  Flash is tasked to find a missing heiress with a unique diamond birthmark on her neck by lawyer Henry Willens, so she can get her father's fortune (with a sizeable donation for the poor of Central City).  The time to find her is running out, and Barry Allen has become fixated on a dream girl on TV (much to Iris West's dismay).  Captain Cold is interested in this dream girl too, and plans to steal her affections from the Flash by committing a spectacular crime.  Flash shows up to stop him, but is stopped by new villain, Heat Wave. 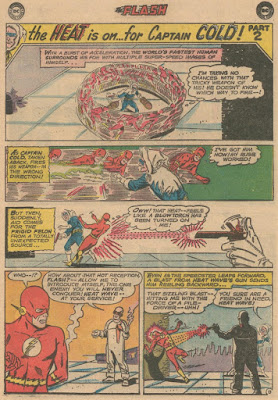 The two villains flee with their ill-gotten booty, to find that Heat Wave, too, has designs on the dream girl!  Fighting, they find their cold and heat guns evenly matched, so go out to steal....and run across the Flash.  Working together, they stymie the fastest man alive for a bit, until he uses their powers against them....defeating them.  Still, Flash has his original task to solve, and checks directly with the dream girl....finding no neck birthmark, but that she has no memory of her early life.  She had had the mark removed, and shows him the picture, proving she is indeed the missing girl, Priscilla Varner, whom Flash speeds to the lawyer to allow her and Central City to get their inheritance (leaving Barry to mend fences with Iris!). 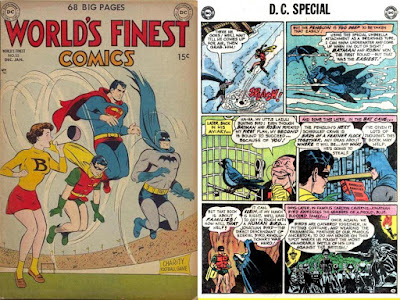 Last, but not least, a Batman and Robin story from World's Finest Comics #55 (December-January, 1951/1952) by William Woolfolk, Lew Schwartz and Stan Kaye (with original cover by Winslow Mortimer).  The Penguin finds his birthday a sad day, as he receives messages in his Aviary from fellow criminals, insulting his bird motif.  Penguin finds this inspiration, and plans new crimes, with clues sent to Commissioner Gordon for Batman and Robin to follow.

Batman and Robin have no problem tracking him down and stopping his first three crimes based on "A bird in the hand is worth two in the bush", "Birds of a feather flock together" and "The early bird gets the worm" (which he escapes with help from his umbrella and birds), but it is the fourth that nearly ends the dynamic duo ("Killing two birds with one stone")....until they enlist a little help from a bird themselves, ending with capturing the Penguin, and putting him in a new nest...in jail! 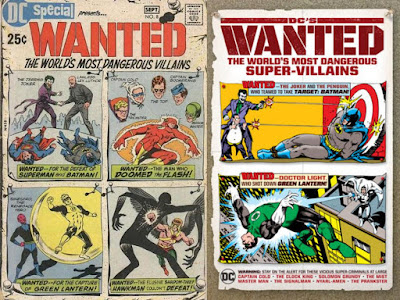 While the Penguin ended this collection of Wanted The World's Most Dangerous Villains, the collections of villain based reprints would continue, in a nine issue series in the 1970s, recently collected by DC Comics (though not containing the stories from this DC Special or the previous....but it does have some NEW old tales, making it worth a look!). 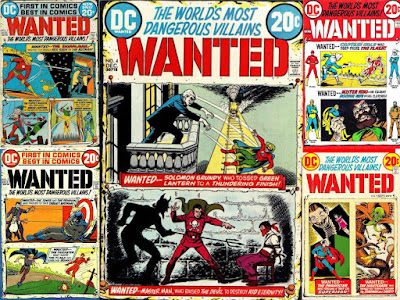 Posted by Dave's Not Here Comic Blog at 8:55 AM