Superman Vs. Dracula and the Frankenstein's Monster 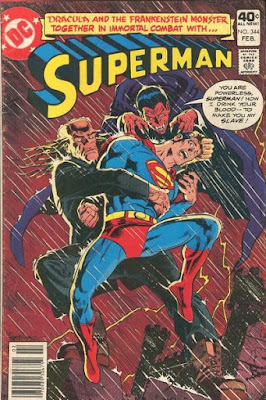 Seems as characters go, a meeting of Superman and Dracula and Frankenstein's Monster was long overdue, but it happened in Superman #344 (February, 1980) under a stunning cover by Jose Luis Garcia-Lopez.

"The Monsters Among Us!" featured a story by Len Wein and Paul Levitz (who had both previously worked on the Phantom Stranger comic of the 1970s), with interior art by Curt Swan and Frank Chiaramonte.  This story sent Clark Kent and Lois Lane to cover a seance, presided over by the blind medium of Cassandra Craft (who had previously appeared in the earlier mentioned Phantom Stranger series).  Cassandra could sense there was more to Clark Kent that met the eye, but didn't really follow up on it as the group was attacked by the pair of Universal Monsters.   Superman went toe to toe with Frankenstein's Monster, and Dracula and the animated man had to withdraw without finishing off Cassandra, but, Dracula had come to realize that drinking Superman's blood would give him incredible power. 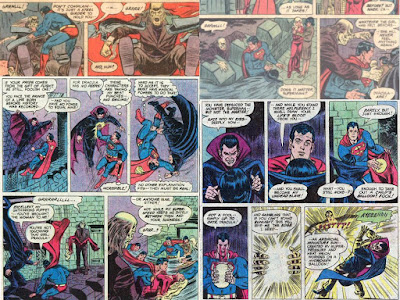 The two monsters tried again, this time getting closer to finishing the Man of Steel (and convincing him of the potential inevitability of Dracula's victory).. ...when the Phantom Stranger mysteriously appeared and took the two fiends back to the fictional world from whence they came (and without even a hello to his earlier paramour, Cassandra).

Though little explanation of where Frankenstein's Monster or Dracula came from in Superman's world, it was still quite the great one issue story!
Posted by Dave's Not Here Comic Blog at 4:53 AM