Batman's Heart Of A Vampire 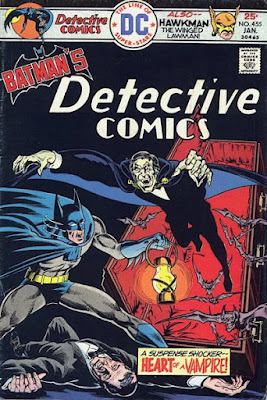 Batman faces off against a vampire in Detective Comics #455 (January, 1976), in "Heart Of A Vampire" by Elliot S! Maggin and Mike Grell (with Mike Grell also providing the cover).


Bruce Wayne and Alfred Pennyworth need help as their car breaks down in the woods.  They end up at a boarded house, where they find Gustav Decobra (an 18th century physician who was trying to prelong life, at least until he was set upon by vampires), who leaves his coffin as Bruce changes to Batman to face the vampire, but... 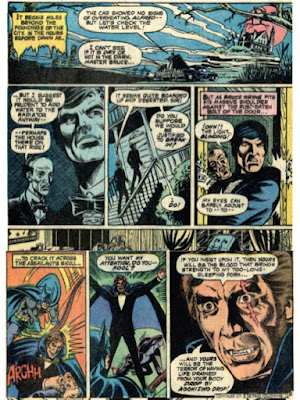 ...Batman has a problem with this Christopher Lee look-a-like, as stabbing his heart with wood doesn't stop the creature.  Perhaps Batman would have been better off not to disturb Decobra's rest (being trapped in a coffin surrounded by sun lamps!).

Instead, the battle makes the old clock in the house tick louder...and figuring out why is what allows Batman and his butler to survive this vampiric encounter!

Still, how did Bruce and Alfred fix their broken down car?
Posted by Dave's Not Here Comic Blog at 4:40 AM