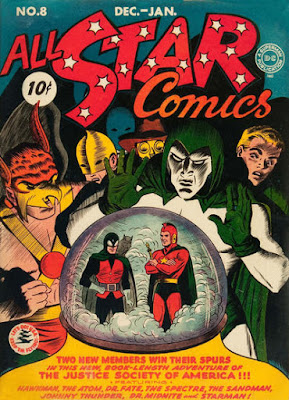 The Amazon was created by William Moulton Marston and H.G. Peter, detailing Princess Diana's first meeting with U.S. Army pilot Steve Trevor as his plane crashed near Paradise Island, and, after winning a competition against her fellow Amazons, Diana left her mother, Queen Hippolyte, and her home, Paradise Island, to go fight World War II in Man's World as Wonder Woman! 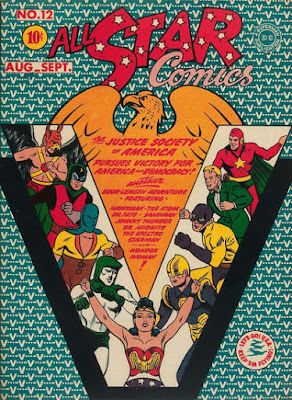 But, as you might have noticed, Wonder Woman didn't make the cover.


The main story of the issue (with a cover by Everett Hibbard) was having Starman and Dr. Mid-Nite join the Justice Society of America (and a short story about pilot Hop Harrigan)!


Wonder Woman wouldn't get a chance to join the group until a few issues later with a major cover appearance..... 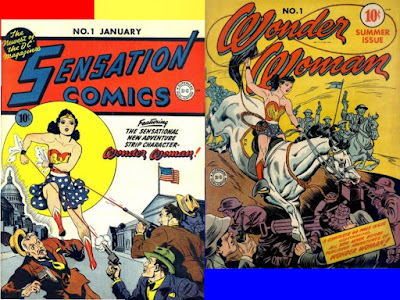 Oddly, Wonder Woman's success (getting her origin told again with Sensation Comics #1 of January, 1942, and again in Wonder Woman #1 of Summer 1942) messed up her membership to the JSA (because the comic company had a rule that active members wouldn't have their own titles, yet Wonder Woman graduated up at the time she was inducted....so, she remained as a secretary to the team....). 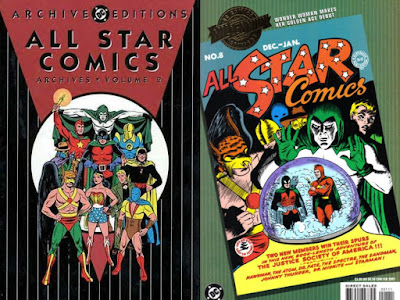