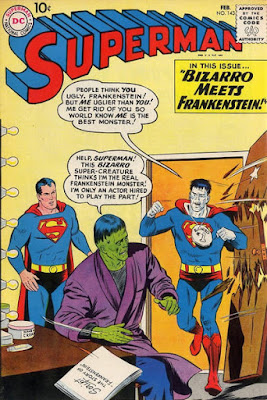 The title of Superman #143's cover story (drawn by Curt Swan and Stan Kaye) seems simple enough..."Bizarro Meets Frankenstein".  But the February, 1961 story by Otto Binder, Wayne Boring and Stan Kaye has a little more of twist to it.

True, the cover tells you it isn't Frankenstein's Monster that Bizarro is crashing in on, but instead an actor playing the monster.  Bizarro is upset that the actor is getting more attention than him, so he continues to hang around, but gets laughter instead of fear.  Superman helps his imperfect duplicate get fear, so #1 will go home to Bizarro World.

There, Bizarro acts like any father, presenting his kids with a gift, a puppet of Superman, which scares them!  Perfect logic for the Bizarro family!
Posted by Dave's Not Here Comic Blog at 4:13 AM