Clocking In With The Time Foes 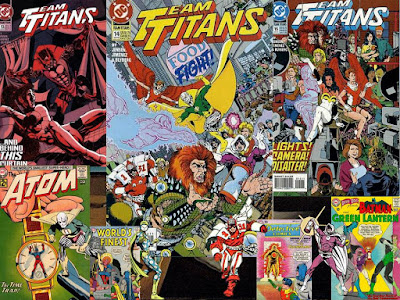 Time, time, see what's become of me....and it was time for villains such as Chronos, Clock King, Time Commander and the Calendar Man, who used time as motif in their villainous plans to gather together, with their most ambitious plot of the seasons.

But, before going into that, a little of the history of these villains, while we tick down the seconds to their big plans! 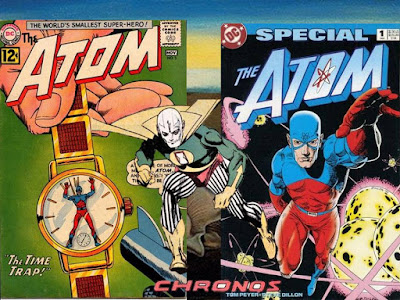 David Clinton started off as a thief with a fascination for time pieces in the Atom #3 (October-November, 1962) by Gardner Fox, Gil Kane and Murphy Anderson, but then joined the Crime Champions, the Injustice Gang of the World, the Secret Society of Super-Villains and the Suicide Squad, as well as fighting dinosaurs and playing baseball as he perfected his time travel devices. 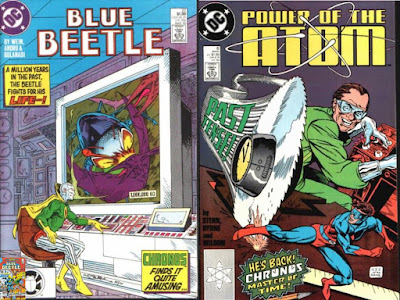 While Ray Palmer took a little time off in the jungle, Chronos faced the Blue Beetle, ending up trapped in the time of the dinosaurs, returning home the long way (via suspended animation), making a ton of money via the stock market (having awakened a little before he had planned), facing off against the Atom again (during the Invasion!), then losing an arm during a battle with the Atom in the Atom Special #1 of 1993 by Tom Peyer and Steve Dillon. 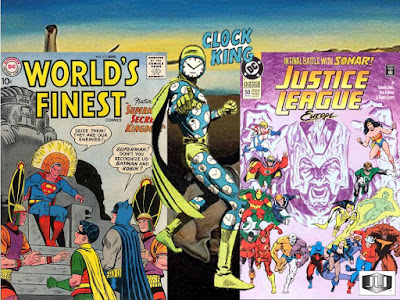 William Tockman faced Green Arrow in World's Finest Comics #111 (August, 1960) by Ed Herron and Lee Elias, robbing banks using a clock costume. Clock King was broken out of jail to face the Justice League (along with other foes of theirs like Flash's Captain Cold, Green Lantern's Puppet Master and Wonder Woman's Professor Menace) in Justice League of America #5 (June-July, 1961), before going back to jail again, finding out in World's Finest Comics #257 (June-July, 1979 by Paul Kupperberg, Jose Delbo and Frank McLaughlin) that the lab had made a mistake in his diagnosis (as he was robbing banks to get money for his invalid sister, as a doctor told him he had only six months to live, and his sister was dead while he was in jail, so he revealed to Green Arrow for the first time here, promising revenge again the Emerald Archer and the doctor).  Tockman faced Green Arrow again in World's Finest Comics #284 (October, 1982 by Mike W. Barr and Dan Spiegle) before the Crisis On Infinite Earths. 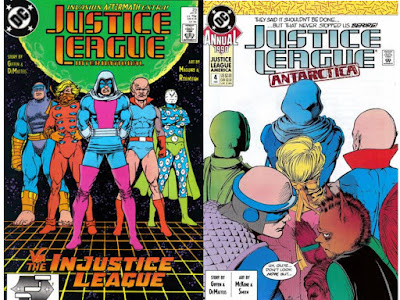 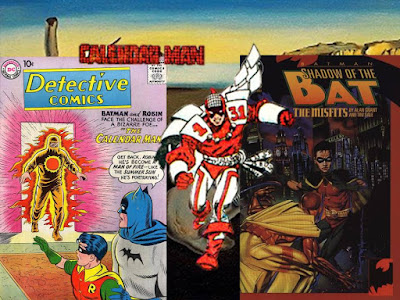 Julian Day started off his time as a villain in Detective Comics #259 (September, 1958) by Bill Finger, Sheldon Moldoff and Charles Paris, facing off against Batman and Robin using the seasons as a motif, facing Batman five times (with the Darknight Detective having to figure out that fifth season).  It took some time for the Calendar Man to return, taking the week as inspiration for his crimes in Batman #312 (June, 1979 by Len Wein, Walter Simonson and Dick Giordano), then returning a little sooner, with the red costume most often seen in, with Batman #384 (June, 1985 by Doug Moench, Rick Hoberg and Rudy Nebres), with a superiority complex, having been recruited by the Monitor to face Batman as one of Batman's most dangerous foes (well, he's more dangerous than quite a few, but  really?), this continued into Detective Comics #551 (June, 1985), and a defeat in Batman #385 (July, 1985)...but he was able to escape and be involved in the Crisis On Infinite Earths with other villains, and escaped again in Batman #400 (October, 1986). 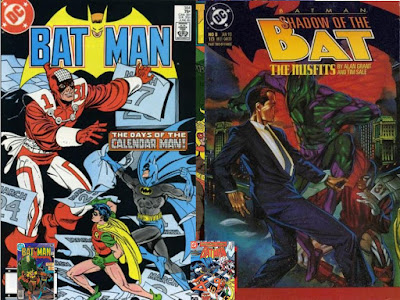 After a quick appearance with other lower tier villains at the Dark Side Bar in Justice League America #43 (October, 1990), Calendar Man worked with a bunch of "misfits" in Batman: Shadow Of The Bat #7 to #9 of the early 1990s by Alan Grant and Tim Sale, with Cat-Man, Killer Moth and a new villain, Chancer, who, combined, were able to prove that any villain can be deadly! 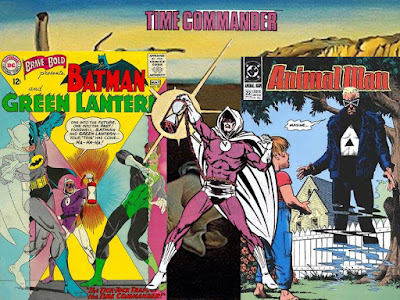 Last but not least is John Starr, who premiered in Brave and the Bold #59 (April-May, 1965) by Bob Haney and Ramona Fradon, facing Batman and Green Lantern as the Time Commander.  Starr at least did manipulate time a little with his hourglass, who was able to vex both heroes, by learning their secret identities and send them to other time periods as well.  The heroes teamed up to get home, and to defeat the Time Commander, who had disguised himself as Batman, by shattering his hourglass.  Time Commander returned quickly, facing Batman and Green Lantern again, in Brave and the Bold #69 (December-January, 1966/1967), this time trying to recreate Cosmo, a being of incredible power, that he also wanted to use to get revenge, but Cosmo's original creator, Dr. Carruthers, returned and Cosmo was dissolved. 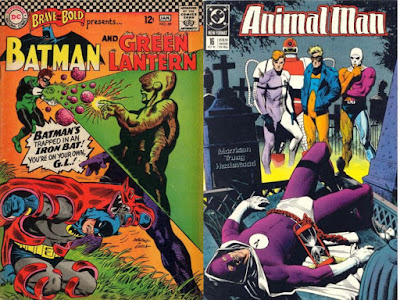 Time Commander disappears for a while, with a promised battle with the Outsiders that didn't happen, but he did meet a few members of Justice League Europe (including Elongated Man, Rocket Red, Animal Man and Metamorpho) in Animal Man #16 (October, 1989 by Grant Morrison, Chas Truog and Doug Hazlewood), where Animal Man realized the Time Commander was trying to create a better world without suffering and death....at least until Metamorpho knocked Starr out, defeating "the villain".  Animal Man returned to Time Commander, hoping to use his abilities to travel in time to save his own family, but instead got involved in something weirder with the second Psycho-Pirate and help from Rip Hunter in Animal Man #22 (April, 1990). 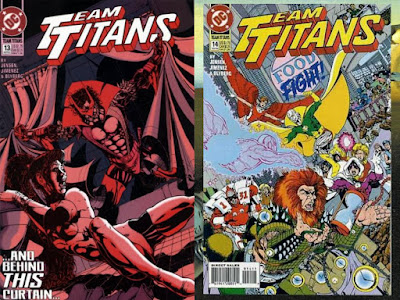 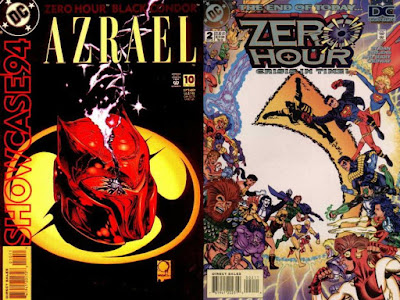 The Time Foes tried again to steal time travel tech, getting involved with JLA foe, the Lord of Time, in Showcase '94 #10 (September, 1994 by Mike McAvennie, Jason Armstrong and Stan Woch), but they messed up time, and the universe began to dissolve (which was a part of Zero Hour: Crisis In Time (which also wiped out the history of the Team Titans....)...

...and the Time Foes didn't make either of these covers, as their time together ran out. 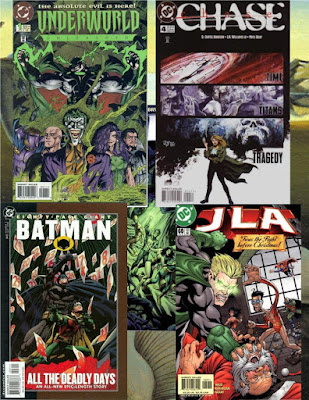 Each of the Time Foes did return later, with Chronos beginning by being recruited by Neron in Underworld Unleashed #1 (November, 1995 by Mark Waid, Howard Porter and Dan Green, and messing with the Legion of Super-Heroes while powered by Neron), Clock King forming his own team of Clockwatchers in Chase #4 (May, 1998 by D. Curtis Johnson, J.H. Williams III and Mick Gray), Calendar Man likely making his next date in Batman 80-Page Giant #3 (July, 2000 by Chuck Dixon and an army of artists including Joe Staton, Manuel Gutierrez, Mike Deodato, Graham Nolan, Louis Small Jr, Dale Eaglesham and Bill Sieinkiewicz) going weekly again and the supposedly dead Time Commander being behind the scenes in JLA #47 (November, 2000 by Mark Waid, Bryan Hitch and Paul Neary), and later in JLA #60 (January, 2002)..... 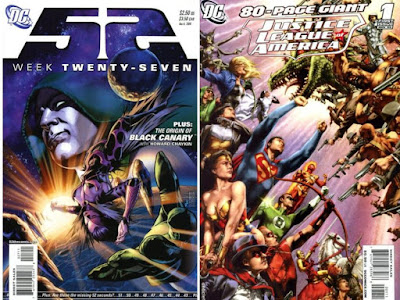 ...as well as being there for a death of Waverider in 52 #27 (January, 2007 by Geoff Johns, Grant Morrison, Greg Rucka, Mark Waid, Keith Giffen, Shawn Moll, Mariah Benes, Ruy Jones, Nelson, Rodney Ramos and Prentis Rollins), and finally getting his hourglass in Justice League of America 80 Page Giant #1 (November, 2009 by Rex Ogle, Mahmud Asrar and Rob Hunter) from the Lord of Time (as the two have become foes over time....).
Posted by Dave's Not Here Comic Blog at 3:44 AM