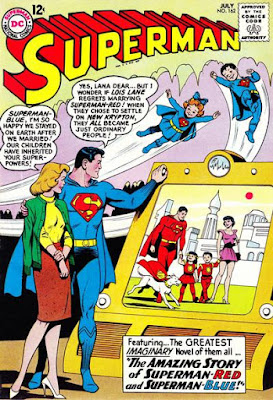 "The Amazing Story of Superman-Red and Superman-Blue" first appeared in Superman #162 (July, 1963), by Leo Dorfman, Curt Swan and George Klein (and cover by Kurt Schaffenberger)....and it was a doozy!  Superman decides he has too much to do, so makes a machine that will increase his intelligence (powered by the many colors of Kryptonite), and does increase his intelligence (but also permanently splits Superman into two equal beings, one Superman-Blue, the other, Superman-Red).  With two Supermen, he is able to cure all the world's ails, reform the villains, even marry Lois and Lana (and start a family and retire). 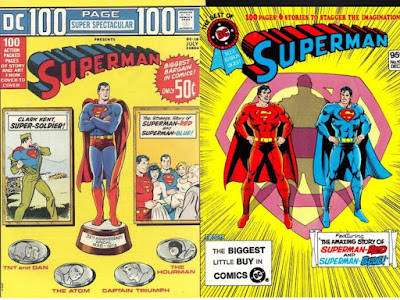 It's worth noting that this story was indeed a very good story, as shown by the number of times it has been reprinted.  First in the 100-Page Super-Spectacular DC-18 (July, 1973, with a cover by Nick Cardy), in the Best of DC #19 (December, 1981, with a cover by Ross Andru and Dick Giordano)... 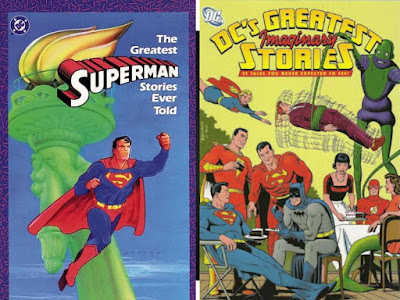 ...in the Greatest Superman Stories Ever Told from 1987 (both hardcover and softcover versions), and in DC's Greatest Imaginary Stories #1 under a Brian Bolland cover from 2005 (and soon after, the "imaginary story" was classified to Earth-168, putting it as a part of DC Continuity, though removed a bit....with a brief appearance in the Kingdom #2 and in Infinite Crisis #5) 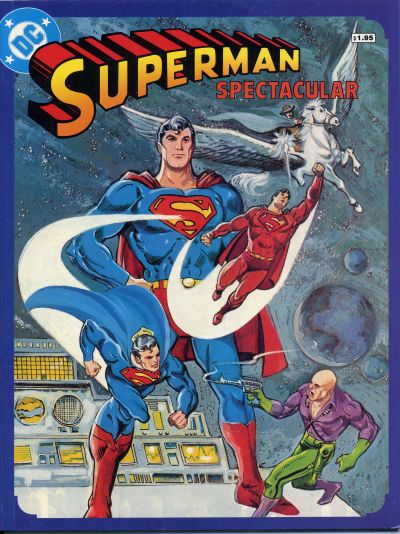 Superman-Red and Superman-Blue returned as a part of the usual DC Universe in an unnumbered Superman Spectacular in 1982, with "The Startling Saga Of Superman-Red And Superman-Blue" by Bob Rozakis, Paul Kupperberg, Adrian Gonzales and Vince Colletta (with Gonzales providing the cover).  Superman foe, the space cowboy on the flying horse, Terra-Man, finds some Red Kryptonite, and working with Lex Luthor, expose Superman to it (causing the Man of Steel to split into Superman-Red and Superman-Blue), with the duo capturing Terra-Man, but not Luthor, who then learns magic to threaten Lois Lane, while the two Supermen re-merge, then beat Luthor and save Lois. 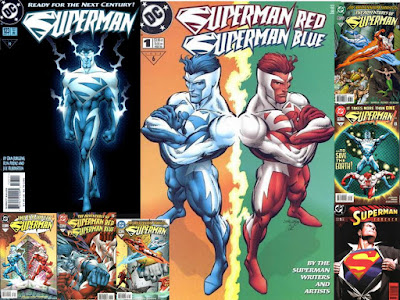 For a time, Superman's powers changed from the Kryptonian powerhouse that he was to a more electric based hero, starting with Superman #123 (May, 1997) by Dan Jurgens, Ron Frenz and Joe Rubenstein.  This lasted for a while (from "Superman Triangle Numbers" #19 of 1997 to #21 of 1998, including a Superman Red/Superman Blue special, with the dueling electrical Supermen in February of 1998, with triangle #6 of 1998, where the Superman Red premiered in), and the two had re-merged into a "classic" Superman in Superman Forever #1 (June, 1998) after defeating the Millennium Giants. 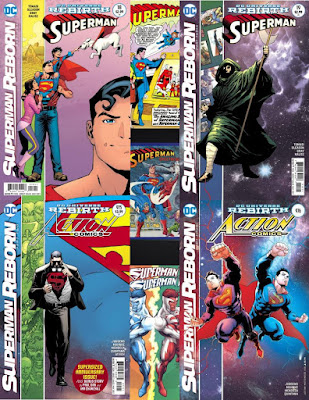 With the death of the New 52 Superman, an earlier Superman returned to be the "new" Man of Steel, and very recently, Superman #18, Action Comics #975, Superman #19 (revealing the older Superman to have a "blue" energy, and the newer, deceased one to have released his "red" energy" and Action Comics #976 (all 2017, Superman #18 and #19 by Peter J. Tomasi, Patrick Gleason and Mick Grey, the Action Comics by Dan Jurgens, Doug Mahnke and Jaime Mendoza)...

...give the saga of Superman Red/Superman Blue new life for the new Millennium, seeing Superman Reborn!
Posted by Dave's Not Here Comic Blog at 3:33 AM