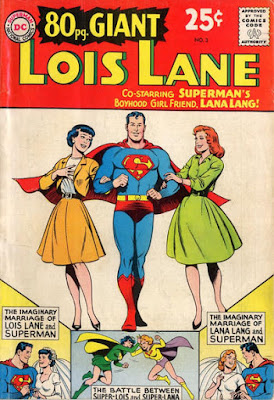 Lois Lane was the feature of 80 Page Giant #3 (September, 1964), but the focus was split between Superman's girlfriend, and Superman's ex-girlfriend, Lana Lang....


...who had been the sweetheart of Superboy (Superman, when he was just a boy).  Of course, Superboy grew up and moved to Metropolis to become Superman, and eventually, Lana followed, to strike up a rivalry with Superman's current paramour, Lois Lane.


Here's a few of the tales that show off how these two got along....or didn't! 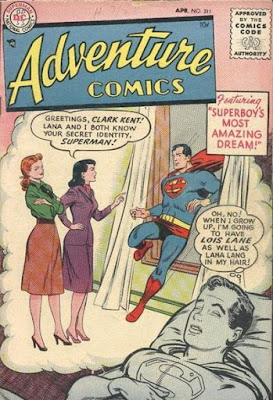 ....that dream has both Lana and Lois in it.


But, it was a dream of Superboy's future as Superman, and how, if Lana knew Clark's secret identity, Lana would reveal it to reporter, Lois.  So, Superboy decides not to trust Lana Lang with the knowledge of his dual identity.

It wasn't impossible for Clark to dream of Lois, and her career as a reporter, having met Lois before (back in Adventure Comics #128...but Lana wasn't around then...). 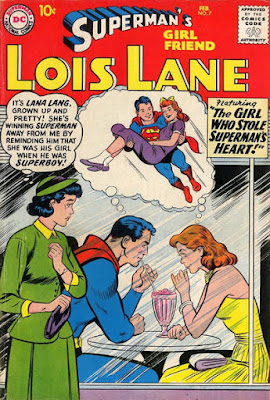 Having lived in Smallville, Lana wanted to get out of town, and after a recent encounter with Lana in Smallville (in Superman #116), headed to Superman's new home town.

Problem was, Lana exhausted her funds moving to Metropolis, so she needed help, turning to Lois (who got Lana a job at the Daily Planet as well as letting Lana stay in her apartment).

This begins the modern day rivalry between Lois and Lana, with the two ladies wondering which of them Superman loves more, and leaving them both wondering which would be "The Girl Who Stole Superman". 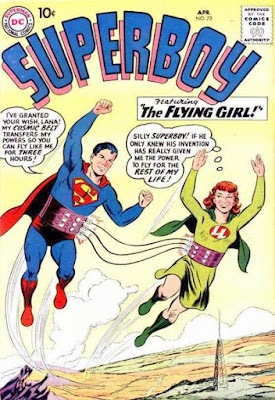 Next up is "The Flying Girl of Smallville" from Superboy #72 (April, 1959 by Jerry Coleman and Creig Flessel).

Lana is on her own this time with the Boy of Steel, getting his fingerprints....which leads Superboy to offer Lana a wish to prevent her from learning his secret identity.

Lana wants to learn how to fly, with Superboy figuring out a way to do just that, but almost at a terrible cost.

If Lana wears the flying belt for too long, her flight powers become permanent.

Superboy has to play a trick on Lana to get the belt off of her.... 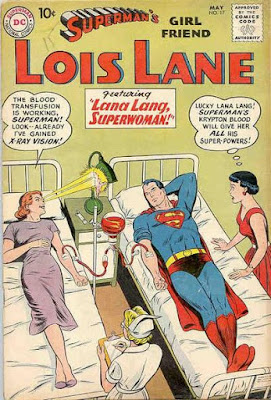 Superman offers Lana a blood transfusion to giver her super powers.  Lois is outraged by this, until Superman makes the same offer to her, having both women have powers while Superman has to leave the planet for a while.  The two women go to an abandoned mine, and would have died there, had not Superman given them powers.

Superman returns, and explains Brainiac set him up, blackmailing the Man of Steel with the potential destruction of Earth unless he left for a time, so the women would face the explosion without him around.

Thus, Superman came up with the power transfer to the ladies (which ended up being temporary), with Brainiac leaving Earth alone since Superman followed his instructions. 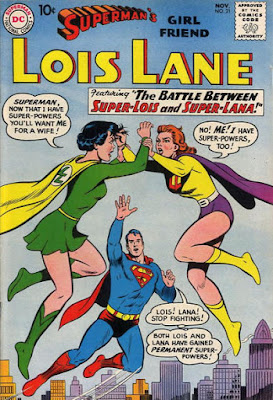 A supernatural lake provides Lois and Lana powers again, leading to "The Battle Between Super-Lois and Super-Lana" in Superman's Girl Friend, Lois Lane #21 (November, 1960) by Jerry Siegel and Kurt Schaffenberger.


While super-powered, the ladies end up in a fight....each figuring if they could win, the winner would also win the affections of Superman.


Problem is, the powers wore off before a victor could be decided, and the lake was destroyed, so they couldn't get the powers back, allowing Superman not to have to make a choice between Lois and Lana, yet again. 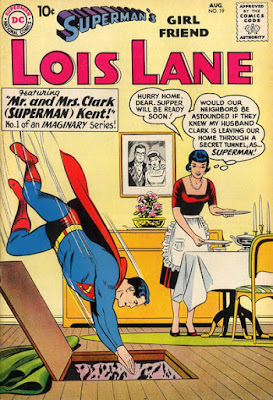 This is an imaginary tale (but aren't they all?), featuring a story out of the regular continuity of the Superman titles of the time, where Clark reveals his secret to Lois, then marries her as Clark Kent.  This creates problems for Lois, especially when she sees other women interact with Superman (as well as having to deal with gossipy neighbors, who feel Lois could do better than Clark).

This disheartens Lois, who knows how super Clark is, but cannot tell anyone, for fear of revealing his secret. 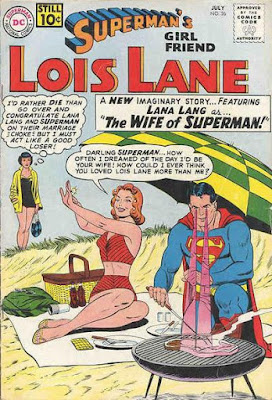 Not to be outdone, Superman's Girl Friend, Lois Lane #26 (July, 1961) by Jerry Siegel and Kurt Schaffenberger features the other end of the imaginary story idea, with "The Day Superman Married Lana Lang".

Lana finds out that Clark is Superman, but instead of publishing his identity as a scoop, asks him to wipe her memory of this knowledge, to keep Clark safe, which so impresses Superman, that he marries her.

Superman then develops a formula to give Lana powers, which leads to trouble for the couple, as Lana does not have Superman's vulnerability to Kryptonite, thus leading to her constantly saving him, stressing their marriage until the Man of Steel leaves Lana to regain his own pride. 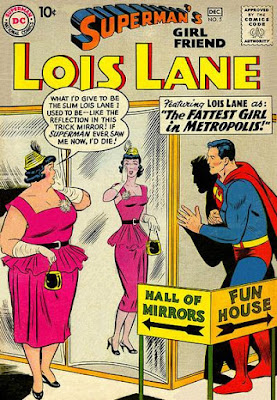 "Superman's Greatest Sacrifice" happened in Superman's Girl Friend, Lois Lane #5 (November-December, 1958) by Robert Bernstein and Kurt Schaffenberger (not pictured on the cover), where Lois Lane goes to get a picture of Dolores Drake, a reclusive millionaire (that Lois happens to discover is a look-a-like for herself).

Superman sees the two together at the Daily Planet, and proclaims his love for Delores...with Superman even going so far to offer to remove his powers to marry Delores!

Lois uncovers a plot of local criminals to rob Drake's mansion, rushing there to save the now powerless Superman....finding out Superman still had his powers, and this was all a trap to expose an imposter Delores Drake. 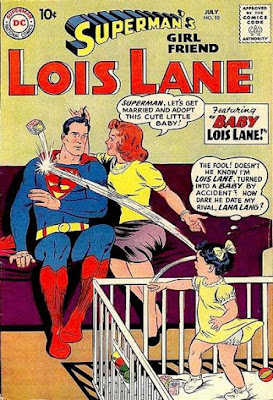 Superman's Girl Friend, Lois Lane #10 (July, 1959) by Robert Bernstein and Kurt Schaffenberger shows how fickle Lois can be at times, as it features "Lois Lane's Romeo" (not the story featured on the cover...).


While covering a film festival in Italy with Clark Kent, Lois becomes jealous of Superman, who appears at movie premieres with a local actress, Gina Loretti.


Lois pursues her own fling, with Dino Del Monaco, but that ends when Superman reveals he's a crook to Lois (with Gina's help). 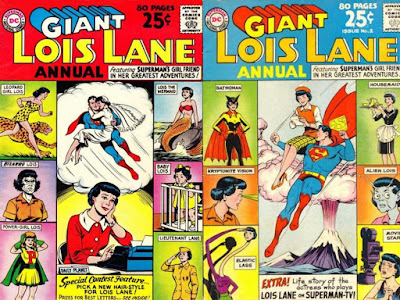 ....but neither of these show the green-eyed monster that Lois turns into when Lana's around, thanks to jealousy.
Posted by Dave's Not Here Comic Blog at 3:31 AM