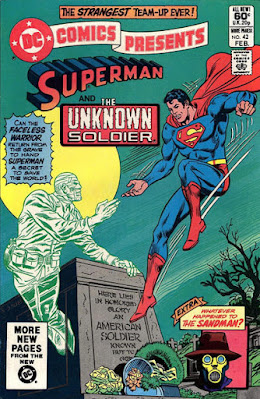 Two men from different worlds, both trying to keep Earth safe, who didn't usually even run in the same circles...
...yet, here is Superman and the Unknown Soldier in DC Comics Presents #42 (February, 1982), under a cover by Rich Buckler and Frank Giacoia, working together to stop a menace that threatens the planet!

Here's how that meeting happened....

The Specter Of War! 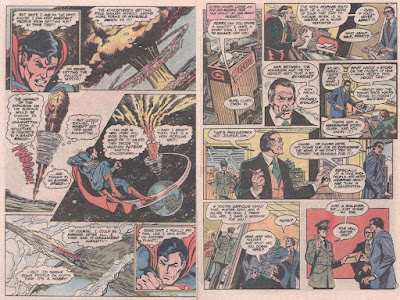 This story by Paul Levitz, Irv Novick and Frank McLaughlin, starts with Superman worrying about nuclear missile testing, as he funnels the fallout from a test into orbit.  As Clark Kent, he goes to his editor, Perry White, telling him he wants to write a story about the dangers of nuclear war, and why countries are racing towards nuclear war (with Perry letting him know that isn't journalism, but opinion), when a soldier comes in with a seal envelope for Clark.

As the soldier leaves, Clark quickly checks it out with his X-Ray vision, seeing it is a request for help from Superman.  Clark looks for him, but the soldier had disappeared.  Reading the note, Superman goes to stop the "accidental" explosion of a nuclear missile in the United States reserves. 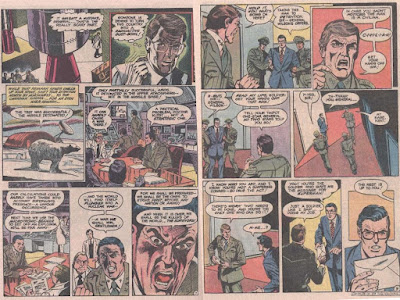 Narrowly avoiding disaster, Major Amos and Doctor Klest (the architects behind the near explosion) plan their next moving, now taking into account the interference of Superman.  Clark Kent goes to investigate at the Pentagon, but is taken under arrest.  But, as he is being taken off, he is freed by a general (who, like the soldier who handed him the envelope) is scratching his neck.  The "general" knows Clark's meekness is an act, and gives him directions to help guide Superman.

Superman, worried that this soldier who is a master of disguise and is following him around with knowledge of his identity, goes to the JLA Satellite to research history with the Red Tornado, finding the files of the World War II secret agent, the Unknown Soldier, who was a master of disguise (who occasionally gave himself away itching at his disguises around his neck). 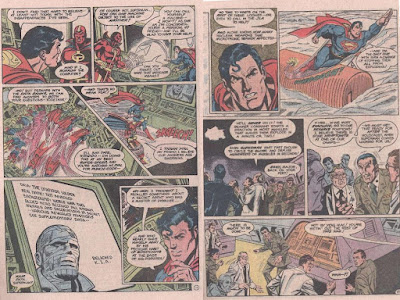 Red Tornado locates a military base that could both start a world ending nuclear war and survive it, which are around the North and South Poles, which sends Superman on a hunt to find the right one.  At the secret military base, Amos and Klest are interrogating a man who claims to be a new transfer (who has an itchy neck).  Superman busts in, finding the device they were using to trigger nuclear weapons early, as Amos has set the microwave beamer to set off hundreds of missiles.  Superman goes to stop them, as the Unknown Soldier apprehends the rouge military men.

After stopping a nuclear war, Superman returns to the base, finding the army had been called in, and they took these villains into custody under the direction of a mysterious soldier who disappeared.  Clark Kent goes to the tomb of the Unknown Soldier, to thank him, wondering if he was the original from World War II, as a janitor (with an itchy neck) accepts the thanks. 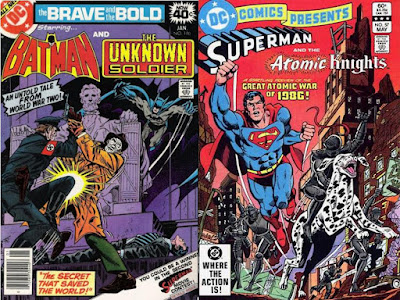 But, at least Superman succeeded in stopping a nuclear war (which Superman later had to deal with when he met the Atomic Knights, who lived in a world after the Great Disaster!).