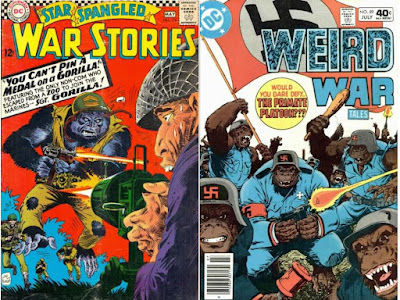 World War II.  A time of epic battles, where the world took sides, with countries all across the world being a part of the Allies or the Axis.

This even extended to the animal kingdom, as gorillas joined in with the U.S soldiers, and the Nazi forces as well.

Here are their stories.

You Can't Pin A Medal On A Gorilla 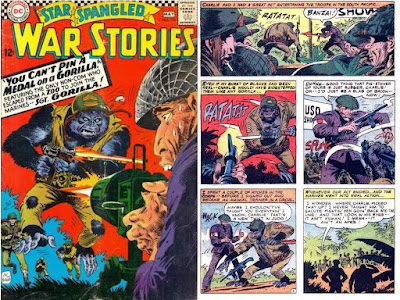 First up, the Allies, with Star Spangled War Stories #126 (April-May, 1966) by Robert Kanigher and Joe Kubert, under a Kubert cover, where Charlie, the simian friend of Sgt. Pinky Donovan, gets unintentionally enlisted in war in the Pacific Theater.

How did this unlikely scenario happen? 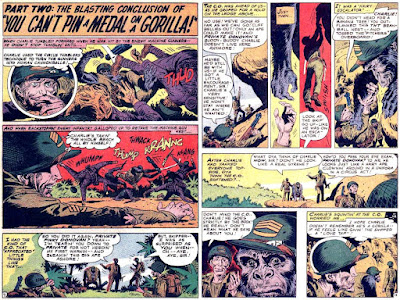 Donovan was an entertainer, working with his gorilla, Charlie, to entertain the troops in the Pacific, when he got called back into duty.  Unfortunately, that meant Charlie had to be locked up in the ship's hold as he headed to his assignment.  But, an attack beached the ship, and set Charlie free.  The enemy attacked the soldiers, with Charlie going into action to save the day.  It worked, much to the surprise of Donovan's C.O....who kept demoting Donovan, even with Charlie's successes!  Charlie even helped them take on their original mission, and lead to them flying the American flag in victory, but ending with the tagline that was the title of the story!

This lighter war story was also felt very real thanks to the stylings of artist Joe Kibert, who usually did more realistic war stories with Sgt. Rock (but still great to see him flex his abilities here!). 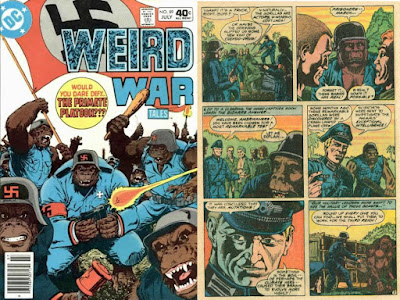 Hearing from the Axis side, is Weird War Tales #89 (July, 1980) by George Kashdan, Ken Landgraf and Dave Simons, under a cover by Jim Starlin, with a whole group of intelligent gorillas working on behalf of the Nazi forces in Africa.
Here's how that happened! 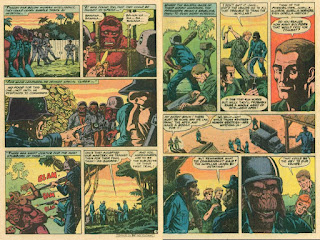 Willy, Jake and the rest of their troop of American soldiers were taken captive by the Nazis, and given to their new jailers...gorillas dressed in Nazi uniforms.  The gorillas were intelligent, and could speak!  They were found by the Germans, and trained to do simple tasks (as they were natural imitators), with those who resisted punished.  But, they didn't take into account animal nature, as they still imitated, and learned from their American prisoners to fight the Nazis, then going to hide better in the jungle after freeing the American soldiers.

Now, whether or not these gorillas were a part of Grodd's Gorilla City, we'll never know.

The results speak for themselves, as to which sides the simians worked with, but one still has to wonder what would have happened had these apes crossed paths on the battlefield?