JSA Vs The Marvel Family Crisis In WWII 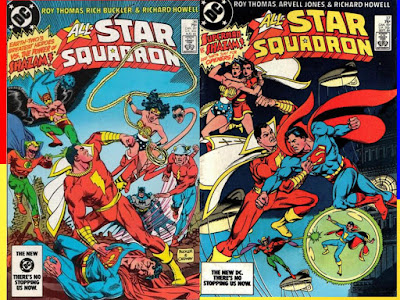 To be fair, even though this issue involved heroes from different Earths, there was no Crisis here.  But, what the issues did have was a historic meeting, with members of the greatest hero team of World War II meeting with the youngsters who had the power of Shazam, all within the confines of the retroactive continuity of the All-Star Squadron, which, meant that this meeting was taking place while many Earths were facing the threat of World War II! 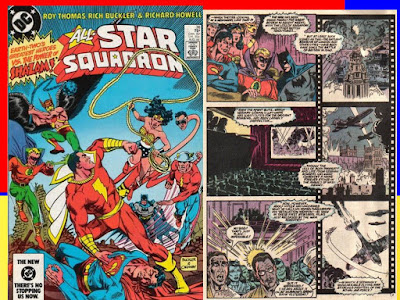 The story all started in All-Star Squadron #36 (August, 1984, by Roy Thomas, Rich Buckler and Richard Howell, with cover by Buckler and Jerry Ordway), with some of the members of the Justice Society of America (Batman, Green Lantern, Flash, Hawkman, Superman and Wonder Woman) watching a newsreel about a new "Super-Nazi" causing havoc over London...and even besting London's protector, the Shining Knight! 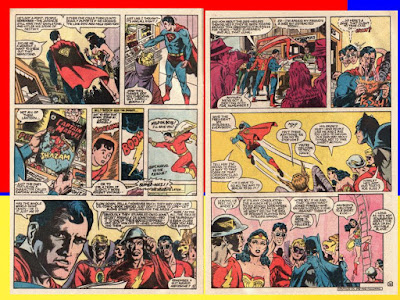 All set to charge off to face this new menace, Plastic Man instead shows up to get the heroes to meet with the President instead, as Superman sees at a newsstand that this new menace resembles the comic book hero, Captain Marvel (and charges off to England anyway).  The other heroes still head to the White House (just missing a boy with a crutch and a young girl).  In Germany, Hitler plans with his new pawn, this Captain Marvel, how best to attack the allies (and that Hitler has Billy Batson prisoner....but, how?  Doesn't Captain Marvel come into existence in place of Billy when Billy says Shazam?  Why is he working with the Nazis?  What is that Spear of Destiny). 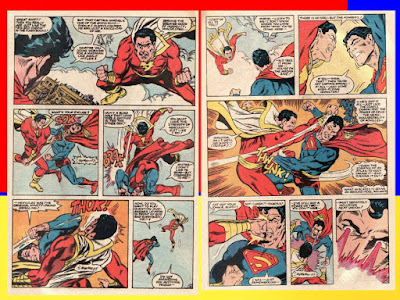 FDR meets with the other heroes and sends them after Superman.  In England, Superman meets the recovering Shining Knight, and then goes to fight Captain Marvel.  The Superman vs. Captain Marvel battle goes evenly, with Captain Marvel retreating, but thankfully the JSA shows up to stop Superman from following (which would have led him into the mystic barrier Hitler set up with the Spear of Destiny that would allow Hitler to take control of any magic based or magic vulnerable hero, like Superman).  The heroes land in London, where they meet Freddy and Mary (the young boy and girl), who say their magic words and become....Captain Marvel Jr. and Mary Marvel! 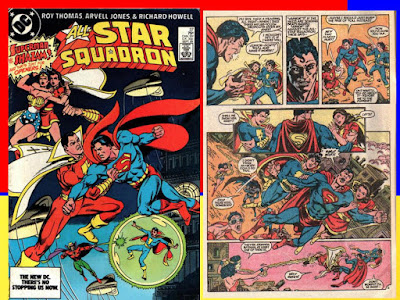 All-Star Squadron #37 (September, 1984 by Roy Thomas, Arvell Jones and Richard Howell, with cover by Rick Hoberg and Jerry Ordway) picks up where the last issue left off....with Superman, upset from his battle with Captain Marvel, thinks about attacking the two younger Marvels, until Batman convinces him to stop (though Green Lantern and Junior and Wonder Woman and Mary skirmish a little as Superman doesn't quickly stop).  Mary explains how she just got her powers (in a world where they aren't comic book characters) and the three Marvels were flying when Captain Marvel disappeared.  Mary and Junior went to the old Wizard (Shazam) at the Rock of Eternity, who gave them enough information to track Cap here, and they were looking for help.  The heroes plan to go to Germany, but Mary and Junior change back to Mary and Freddy, and only Batman, Flash, Hawkman and Plastic Man can go to Germany (as magic heroes would fall under Hitler's Spear of Destiny spell). 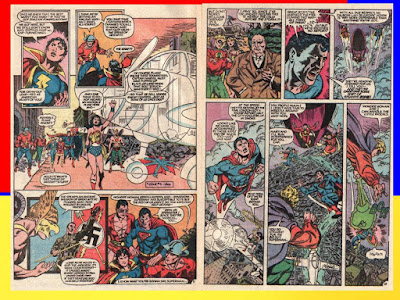 At Hitler's headquarters, the heroes find Billy Batson...and are found by Hitler and Captain Marvel!  Hitler explains that he had his scientist, Hans Gootsden bring Captain Marvel to this Earth, and split Billy from Cap, with Cap under Hitler's control.  Gootsden does the same to Mary and Freddy, taking control of the Shazam powered Mary and Junior. 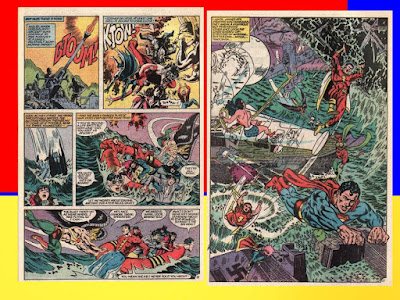 The now controlled Marvel Family take a bomb from Hitler's arsenal, with the plan to fly and drop it on London.  The heroes  and alter egos escape, following along to London, where they are shot down.  Superman, Wonder Woman and Green Lantern stop the bomb and fight Captain Marvel, Mary Marvel and Captain Marvel Jr....and looks like the heroes nearly lose.  Meanwhile, the others are nearly shot...until the previous six show up and save them (inexplicably, the Marvel Family fell out of Hitler's influence...by flying Billy, Mary and Freddy out of Hitler's Spear of Destiny control).  The evil plan defeated, Billy guesses that if the three Marvels and their alter egos all say their magic words, they'd go home and be restored to normal....which they do (and readers guess they did!), as the JSAers and Plastic Man head home. 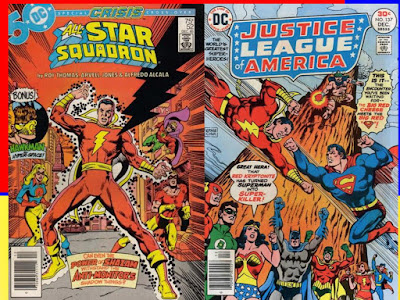 Green Lantern does learn that Cap was okay, as he ends up on Captain Marvel's Earth during World War II (and the Crisis On Infinite Earths, soon after the JSA was sent into hyperspace by Harbinger), and much later, after the Earths start to get designations (starting with the first JLA/JSA crossover), the Earth-1 Superman and Earth-S Captain Marvel meet as well.  This caps a little review, and a rare Earth to Earth crossover that did not involve Earth-1, but Earth-2 and Earth-S!

Posted by Dave's Not Here Comic Blog at 2:18 PM