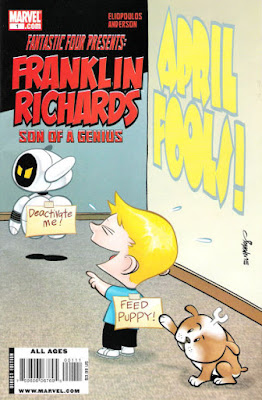 A book for all ages with some humorous situations featuring Reed and Sue's son, Franklin, as writer/artist Chris Eliopoulos has some fun with a few short stories with Franklin's antics in and around the Baxter Building, including "Sick Day", "Brain Game", "Diorama Dilemma", "Roswell Rescue", "Who Dunnit?" and "April Fools Fiasco"!

Just because you are the son of Mr. Fantastic and the Invisible Woman doesn't mean you don't have some normalcy in your life....
Posted by Dave's Not Here Comic Blog at 4:00 AM