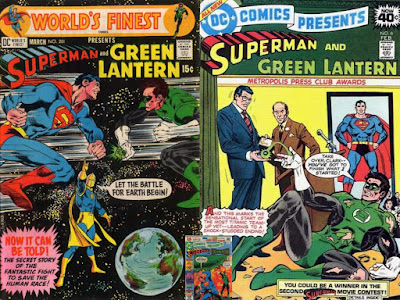 It is amazing that the Man of Steel and the Emerald Crusader didn't really work together much outside of the Justice League of America, but it is true.

But, there were a few occasions where they did, but they seemed to be a little strained, as Superman and Green Lantern are two of the most powerful heroes on Earth! 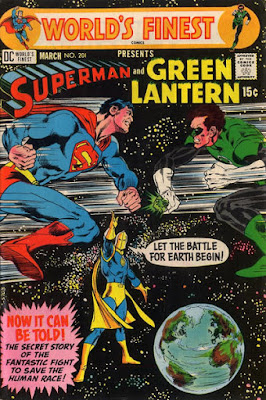 First up, is "A Prize Of Peril" from World's Finest Comics #201 (March, 1971) by Denny O'Neil, Dick Dillin and Joe Giella (with a cover by Carmine Infantino and Neal Adams), with Superman and Green Lantern at odds, being beckoned into battle by Dr. Fate!


Superman and Green Lantern both try to stop a swarm of meteorites from smashing into the Earth, but nearly cause a bigger disaster because they didn't work together.  A Guardian of the Universe appears, setting them a challenge to decide which of the two will be Earth's interplanetary protector.  The contest is to be moderated by Earth-2's Dr. Fate, as they must go through a mystic tunnel, and face their greatest fears. 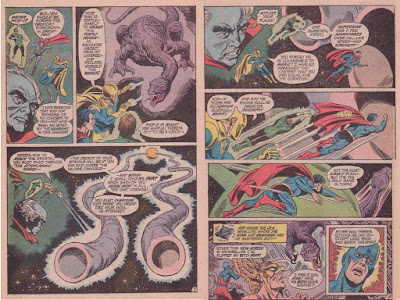 Hal goes through his tunnel, facing a giant yellow spider (but getting through by force of will), and Clark/Kal-El is confronted by his father, Jor-El, feeling that his dad wouldn't approve of his current life (and realizing Superman has no need to feel inferior).  The two free the dragon, which "Dr. Fate" dispatches against the JLA Satellite!   Working together, Superman and Green Lantern take care of the magic dragon, and find "Dr. Fate" (as well as the Guardian of the Universe) to have been mystical disguises for an old JLA foe (who is from Earth-1, and identity can be found here).

This issue, while not guest-starring Dr. Fate, does have Green Arrow, Atom and Hawkman (all of whom also work with Superman). 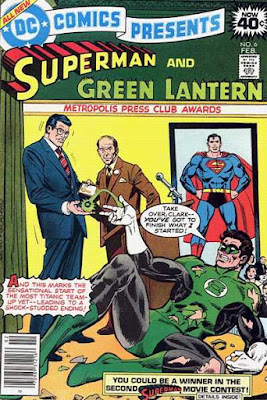 Next up is DC Comics Presents #6 (February, 1979) by Paul Levitz, Curt Swan and Frank Chiaramonte, under a cover by Ross Andru and Dick Giordano, with "The Fantastic Fall Of Green Lantern".

This time around, Clark Kent and Lois Lane are getting a media award, as Clark trips into Lois....preventing her from being crushed by a falling Green Lantern!  Green Lantern hands his ring off to Clark, manifesting a Green Lantern uniform and flying off, at least until Superman stopped him and took the ring (a little illusion made by Clark to keep his dual identity).  The power ring explained Green Lantern was defeated by Star Sapphire, and Superman went to fight her, but without success.  Star Sapphire kidnapped Green Lantern, planning to marry him, but Superman and Green Lantern stopped her. 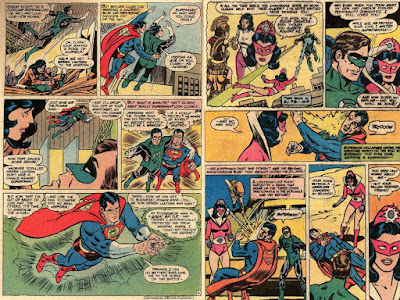 Green Lantern explained that he, as Hal Jordan, and Carol Ferris (Star Sapphire's alter ego) had broken up, and he was unable to muster his full will to fight the lady he loved, yet she had been reunited with the Star Sapphire at this time, so appreciated Superman's help.  Hal flew off with Carol....as Superman was knocked out by a Weaponer of Qward!  The interference of the Qwardians was explained in the next issue (with a team-up with Red Tornado). 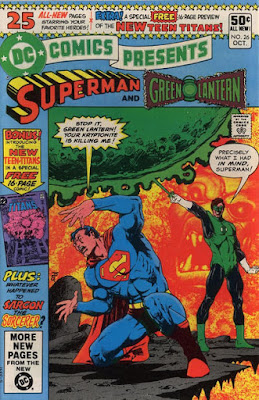 Last, but not least, is DC Comics Presents #26 (October, 1980) by Jim Starlin, Marv Wolfman and Steve Mitchell, with a cover by Jim Starlin, with Superman and Green Lantern battling again, this time "Between Friend And Foe".

Superman and Green Lantern meet on the JLA Satellite as Hal takes over for Clark, who leaves.  Soon after, Hal gets a telepathic summons from Green Lantern Archon Z'gmora, who needs Hal's help, being trapped in another dimension.  Hal goes there after recharging his ring, to find that Archon is already dead, duplicated by N'Gon....who was unable to escape this dimension due to Archon destroying his own ring.  Duplicating Hal and taking his ring, N'Gon brings Superman to his dimension, and battles Superman as Green Lantern/Hal, but the JLA members manage to defeat N'Gon and return home, realizing each other's worth. 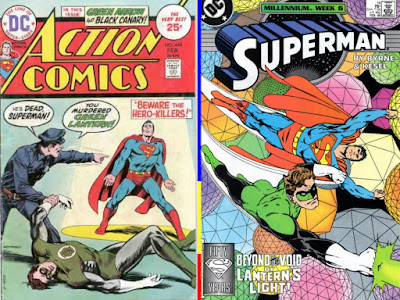 This issue also has a "Whatever Happened To....?" feature with Sargon the Sorcercer, and the debut of the New Teen Titans!

Of course, Superman and Green Lantern had a few other meetings as well, both before and after the Crisis On Infinite Earths, but these were some of the earliest!