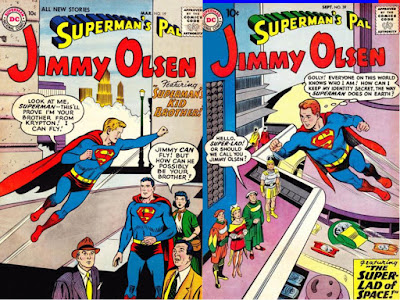 If Superman was to retire, who would replace him?

You'd think just being a cub reporter wouldn't be enough for Jimmy Olsen to take over for Superman...but, back in the day, that was indeed good enough, at least for a little bit.

Here's a couple of classic tales with the times Jimmy was really super! 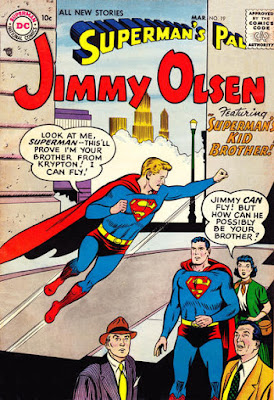 First up, is the time Jimmy thought he was Superman's kid brother from Superman's Pal Jimmy Olsen #19 (March, 1957) by Otto Binder, Curt Swan and Ray Burnley (with cover by Curt Swan and Stan Kaye).

Jimmy, while wearing a Superman costume, gets knocked on the head, giving him amnesia.  So, when he awakens, he thinks he's Superman's kid brother from Krypton.  Through a series of mistakes and lucky accidents, Jimmy is able to "prove" he has super powers.  Superman convinces him to resume his "normal identity" of Jimmy Olsen, Daily Planet photographer, and, while there, it is Lois who helps snap him out of his delusion.

This story, with others, was reprinted in the 1963 Superman Annual #6. 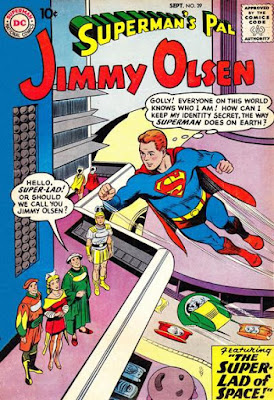 Jimmy must have saved that costume, or gotten another one, as he was wearing it to start the tale of Superman's Pal Jimmy Olsen #39 (September, 1959) by Otto Binder, Curt Swan and John Forte (cover by Curt Swan and Stan Kaye), as he climbed aboard a rocket for a scoop while Superman launched it into space!

Landing on the planet Zolium, Jimmy found that the atmosphere of this planet was different enough from Earth to give Jimmy super powers that were similar to Superman's.  Jimmy decides to become the planet's hero, Super-Lad, but is unable to have a secret identity because everyone recognizes him.  When Superman arrives to take Jimmy home, he finds out that the natives of Zolium could all read his mind, which is what prevented him from keeping his identity a secret. 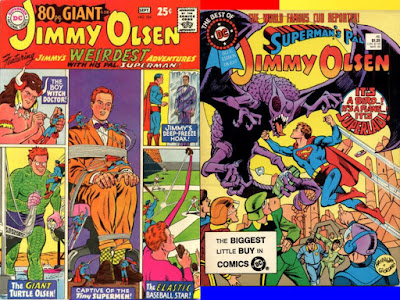 This tale was reprinted in Superman's Pal Jimmy Olsen #104 (August-September, 1967, where other, odder Jimmy Olsen transformations dominated the cover) and in the Best of DC #46 (March, 1984), where Jimmy got his due. 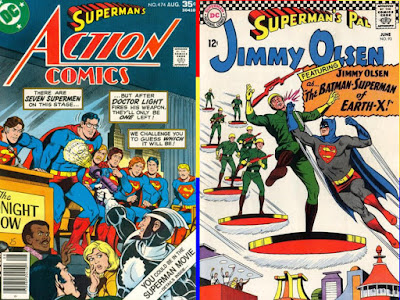 Of course, Jimmy did return again (with others) in a Superman costume....and, then, there was this odder cover as well....but, these are stories for another day!