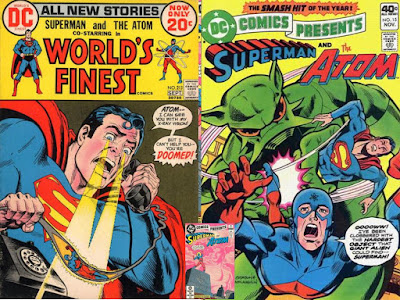 It's a look back at a few team ups of the Man of Steel and the Mighty Mite from before the Crisis On Infinite Earths!

While this might seem like an odd pairing, these two did have occasion to work together, and each was able to help the other solve unique problems..... 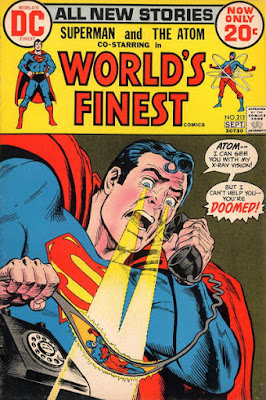 First up for the pairing of Superman and the Atom is World's Finest Comics #213 (August-September, 1972 by Eliot S! Maggin, Dick Dillin and Joe Giella, under a cover by Nick Cardy), where the duo faced "Peril In A Very Small Place!".

Scientist Ray Palmer is researching why his genetic makeup allows him to safely shrink and become the Atom.  He is observing two atoms reacting, but they are shrinking out of sight of his microscope, and he doesn't want to contaminate his sample, so, calls his friend, Clark Kent to watch it with his microscopic vision.  Problem is, Ray decides to go to Clark, by shrinking as the Atom and traveling through the phone lines....it saves him from a small explosion in his lab, but starts a chain reaction....trapping him in subatomic dimension after dimension, while unleashing problems on Earth for Superman to solve.  Superman handles the trouble, then, using his Kandorian Shrinking Ray, heads into the phone line himself.  Superman meets the Atom, who ended up in a subatomic universe, threatened by "the Absorber", a Genesis Molecule which spells doom for the tiny civilization there and any in the larger world around it.  The two work together to move the Genesis Molecule to an uninhabited world, then return to Clark's apartment. 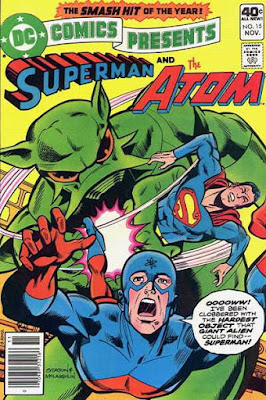 This time, Ray Palmer beams up to the Justice League satellite, with Superman wondering why Ray wasn't in costume as the diminutive Atom.  Seems Ray's powers weren't working, so he came looking for help, and, after handing off monitor duty to Batman (and Ray getting a spare, normal Atom costume out of his locker, since at this time his costume only appeared when he was small), Superman and the Atom went to the Fortress of Solitude to research Ray's problems.  While there, the pair were hit by a mysterious beam, which blasted them out of the Fortress.  Superman explained that they were being attacked by Sabromians, aliens who wanted vengeance upon the Man of Steel.  The aliens seem to be giants, and negate Superman's powers as well...forcing Ray to think, and reactivate his own shrinking powers to stop them (and, he figures out a little trick of Superman's with that original ray which started all this as well). 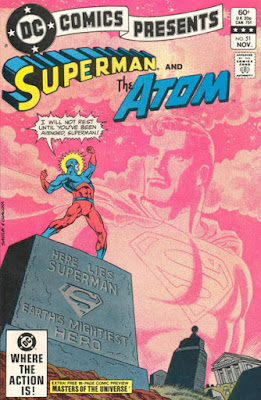 This time around, readers come in on the middle of a larger tale, that of Var-El, Superman's great grandfather (who premiered in DC Comics Presents #37 with Hawkgirl).  Atom is researching the 1800s with Professor Hyatt's Time Pool, when he suddenly becomes a phantom and loses his hold on the Time Pool magnet.  As he floats to the ground, he sees Superman surrounded by aliens (the Orgons), who disintegrate Superman!  Working his way back, Atom goes to the JLA Satellite to report to the team of Superman's death, only to find Superman on monitor duty!  The two go to Hyatt's lab, where Superman recognizes Var-El's equipment they found, and plans to go into the past to solve the mystery.  Atom and Hyatt go along (Hyatt usually couldn't time travel as the Time Pool's access to time was too small for him to use). 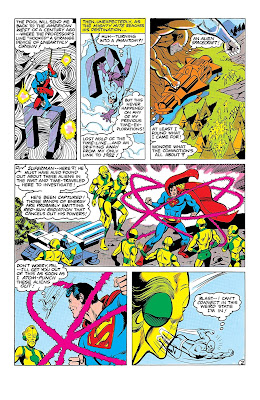 The trio go back in time and find Var-El's laboratory, but are attacked by Native Americans (including a shaman with mystical powers), then Superman and Atom are captured by the Orgons.  Hyatt runs into the woods, and is attacked by a bear, but saved by Var-El!  It was the Orgons who saved Var-El from his near doom in another dimension (See DCCP #37), but he couldn't return to Krypton, instead settling on Earth.  The Orgons also ended up there, causing a sickness with their solar based weapons, which is why the Native Americans were looking for the Orgons (and happened upon Var-El's lab).  Atom breaks free of his prison, only to watch Superman be blasted again (but, it was working with Atom that gave him the idea to block all but the ultraviolet rays that trigger Atom's shrinking power, so that Superman wasn't disintegrated, but shrunk; Atom being in this time period already was the reason he became a phantom when using the Time Pool).  Then, Superman stopped the Orgons' microwave device that was harming the native population, and sent them on their way.  The trio came back to their own time, but where was Var-El?   Seems he met Professor Hyatt, who told him the Kryptonian way of traveling through time, and met with him in his lab.  Var-El would then go on finish his trilogy in DC Comics Presents #74 with Hawkman. 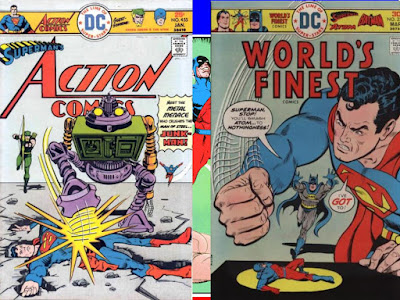 Of course, Superman and the Atom worked together many times in the Justice League of America, and even had a few adventures with other JLAers as well (facing the Junkman or going inside Superman's circulatory system), but, it's a little too late to go into those at this time!
Posted by Dave's Not Here Comic Blog at 3:33 AM