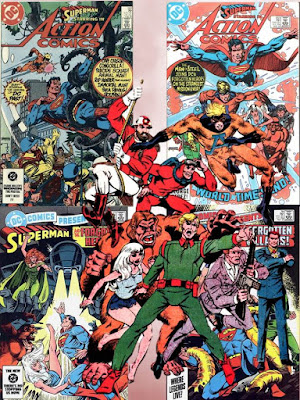 If all these columns have done nothing else, it proves that nothing gets totally forgotten...and even old heroes can come back and continue to have adventures....


Concluding our look back at DC Comics' Forgotten Heroes, we end with some of the more recognizable of the lot...

...and those that have stood the test of time. 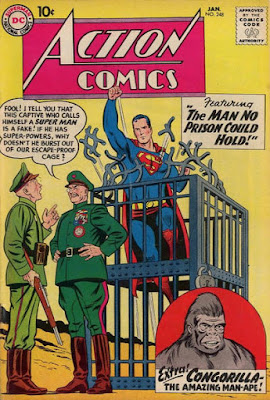 In Action Comics #248, Congo Bill tried to save the life of his friend, Chief Kawolo, but failed, serving only to prolong his life long enough for the chief to give Bill a magic ring, which would allow Bill to change his mind with the legendary golden gorilla, Congorilla, and use his animal strength to help people.  Bill didn't believe the chief, but took the ring. 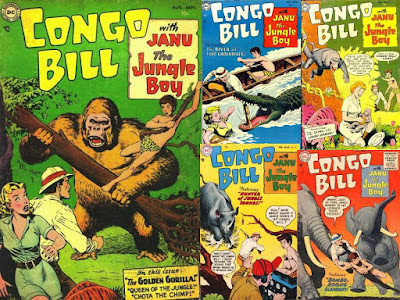 Then a cave-in trapped Congo Bill with no way out, so he tried the ring, and it worked...

....with Congorilla wandering through a movie set and being pursued by a movie director while heading to the cave to save the body of Congo Bill with Congorilla's mind (though he really needed a publicity agent, as Congorilla didn't make any of his covers other than the first...even in the gorilla crazed Silver Age!). 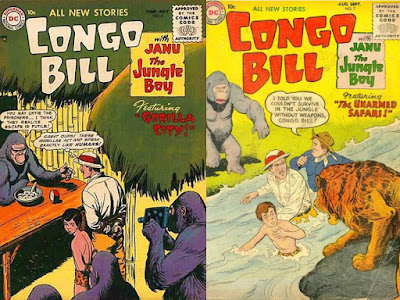 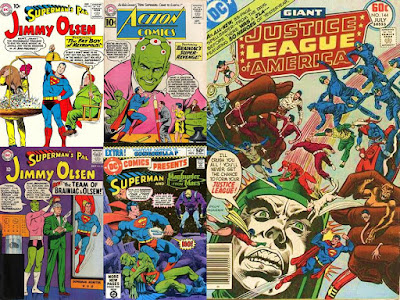 Congo Bill and Congorilla came back to work with Superman to stop Brainiac in Action Comics #280 (September, 1961), and put Jimmy Olsen in the mix again with Superman's Pal, Jimmy Olsen #86 (July, 1965), before a brief feature in the "Whatever Happen To...?" series in DC Comics Presents #27 (November, 1980).  (Congorilla and Congo Bill also showed up in a flashback tale, to right before the Justice League formed, where they worked with Lois Lane, the Challengers of the Unknown, the original Robotman and Vigilante, and almost met Adam Strange, while Rip Hunter fended off the Blackhawks, Plastic Man and Jimmy Olsen in Justice League of America #144 of July, 1977, with a flashback story set around early 1959).

Congorilla found the golden pyramids in Africa, and ended up with the Forgotten Heroes in Action Comics #552 (February, 1984). 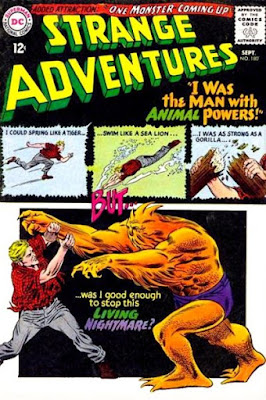 Buddy Baker was just a quiet guy, trying to marry the love of his life, Ellen Frazier (but having some problems proposing) in Strange Adventures #180 (September, 1965, by Dave Wood and Carmine Infantino), that is until he went hunting with his friend, Roger Denning, and was able to proclaim "I Was The Man With Animal Powers", which he got from exposure to radiation from a crashed alien ship...

...and Buddy faced off against the alien who escaped from that ship, saved his friends, even after his powers wore off....and proposed to Ellen...all in 16 short pages, where he never even got a costume or super-hero identity. 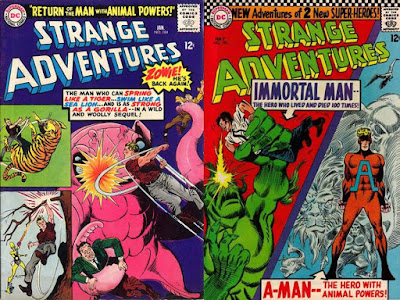 Buddy returned in Strange Adventures #184 (January, 1966 by Dave Wood and Gil Kane), with "The Return Of The Man With Animal Powers", this time with Buddy and Roger finding another alien ship, and two aliens (Trano and Zaarn), working their way through town, firing a hate ray at everyone, which works on everyone except Buddy (who seems to have his animal powers restored, which he uses to defeat the aliens).  Buddy finally takes a costume and super-hero identity (that of "A-Man") in Strange Adventures #190 (July, 1966), facing off against gang boss, Grabo in the Dave Wood/Carmine Infantino tale of "A-Man -- The Hero With Animal Powers". 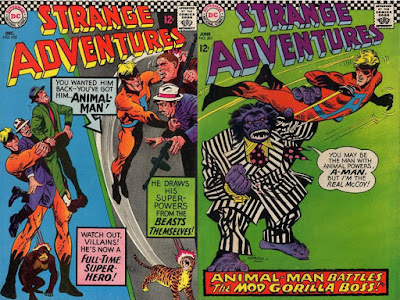 Buddy returns, finally taking the Animal Man name in Strange Adventures #195 (December, 1966 by Dave Wood and Jack Sparling), in "Animal Man - Hero Or Freak?", with Buddy and Roger facing off against Grabo again (as well as mapping where animals are nearby, so Buddy can easily draw on their power at all times).  In his last original solo tale, in Strange Adventures #201 (June, 1967, with no established writer, and art by Jack Sparling), Buddy faces off against "The Mod Gorilla Boss" (beating him when he changes back to human!). 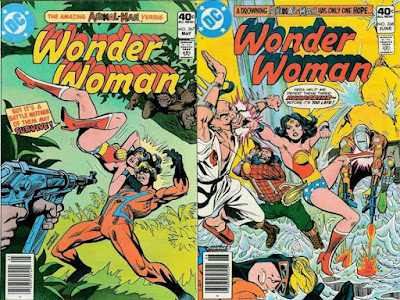 Buddy then faded away again, but not for long, because he found a golden pyramid while scouting for sites, which led to his joining the Forgotten Heroes in Action Comics #552 (February, 1984). 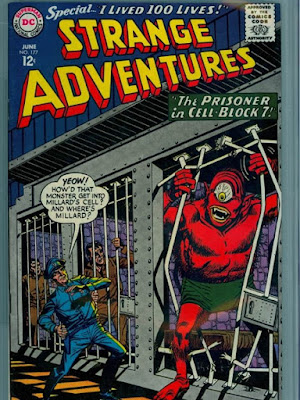 This is the man who helped to bring the Forgotten Heroes together, and he had plenty of time to do it, as he had been around since the days of the cavemen!  The Immortal Man's first recorded adventure happened in Strange Adventures #177 (June, 1965, with no credited writer, but art by Jack Sparling)...

...wherein a man named Mark learned of his earlier lives when he got a jeweled amulet at the orphanage where he was raised, as well as learning of his various super-powers, which he uses to save the town he was in...dying in the process, but knowing in his heart that "I Lived A Hundred Lives"...

...so that he would return. 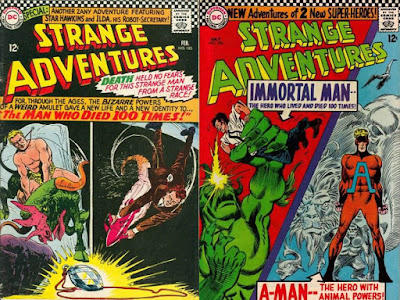 Return he did, "The Man Who Died 100 Times" in Strange Adventures #185 (February, 1966 by Dave Wood and Jack Sparling), first as Jungle Man, who died fighting the villain, Karat (a jewel thief) in Africa to protect a crown claimed by archaeologists Rodney and Helen Phelps, then as Englishman Mark King, facing Karat again to keep the jewels and the Phelps safe (again at the cost of his own life).  The "Immortal Man" returned again in Strange Adventures #190 (July, 1966, with art by Jack Sparling), helping people as Kirk Jason, using a power to find lost objects during an earthquake caused by a giant creature.  Kirk defeats the creature, saving Helen Phelps as well, but at the cost of his own life. 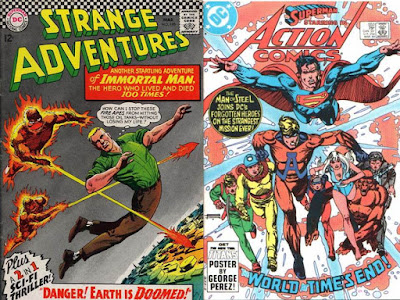 In his last solo story, in Strange Adventures #198 (March, 1967, with art by Jack Sparling), the Immortal Man returns as Anton Carver, a paleontologist for Pembroke College, where he faces "The Apes With Bizarre Powers", as well as Helen Phelps, who had tracked him down.  Sadly, the Immortal Man dies again, leaving Helen behind....but the Immortal Man returned again, with Action Comics #552 (February, 1984), and detailed his own encounter with a golden pyramid in Action Comics #553 (March, 1985), wherein he also gathered the heroes Rip Hunter, Dane Dorrance, Dolphin, Cave Carson, Rick Flag, Congorilla and Animal Man, who would become the Forgotten Heroes, in a battle with Vandal Savage (an immortal enemy, whom the Immortal Man had been sparring with over the ages, since the days they both got their powers from a meteor crash....Vandal himself usually facing the Justice Society and Barry Allen Flash, but recently had been vexing Superman)...and this team exists, proving that even heroes who have been forgotten still can contribute to the safety of us all!

Posted by Dave's Not Here Comic Blog at 3:28 AM