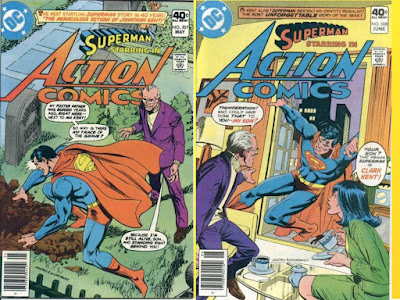 One of the defining characteristics of the Silver Age/Earth-1 Superman, is that it was the death of his Earth father (Jonathan Kent) when he was Superboy, that was one of the biggest changes in Clark Kent's life, leading him to move from Smallville to Metropolis, and to change from Superboy to Superman (shown so well recently in Action Comics #500). 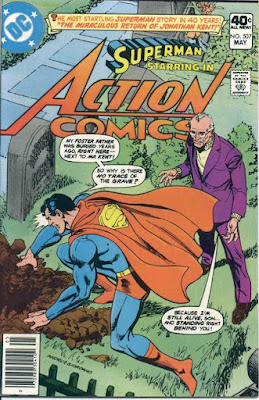 So, imagine Clark's surprise when his father showed up in his current life!  Not a result of a universe changing Crisis, but a helpful alien repaying a kindness the Kansas farmer showed him, Pa Kent was allowed a little time with his grown up son in Action Comics #507 and #508 (May and June, 1980) with covers by Ross Andru and Dick Giordano, and stories by Cary Bates, Curt Swan and Frank Chiaramonte.

A Happy Father's Day to all the fathers out there, and for everyone who has lost a father and would like to talk to him one last time.