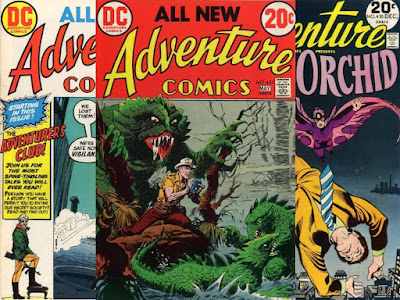 Back in the day, comics would occasionally have hosts, people who were there to introduce a story, and then tell you the story (that you would read in that comic).

Adventure Comics tried one out, with Colonel Nelson Strong of the Adventurers Club, for 3 issues.... 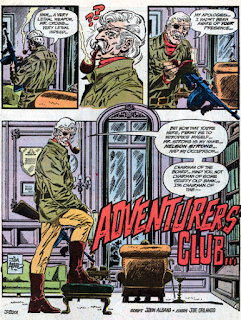 ...where Nelson Strong (created by John Albano and Jim Aparo), would lecture about how great the Adventurers' Club was, and what a privilege it was to be there, looking like a man who had experienced a few adventures of his own over the years .. 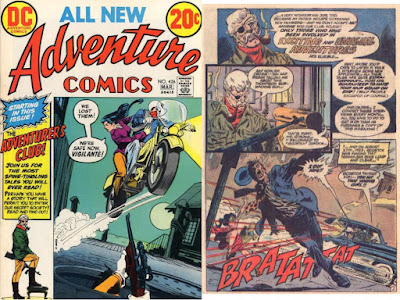 First off, the introduction of the concept with Col. Strong, then, onto the story by Albano and Aparo (with a Dick Giordano cover including co-feature Vigilante), with the story of Scortch Jordon, a 1950s mobster taking out a small time hood in a drive by....and his girl, Ms. Finch.  The police caught Jordon, and her father, Harvey Finch, came to the detectives to confront Jordon. 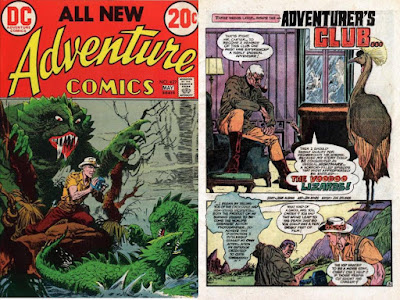 Next up, in another tale by Albano and Aparo (with a feature cover by Luis Dominguez) , where assistant photographer Mr. Carter was telling his tale to Col. Strong, of how he was photographing a violent attack on an antelope by crocodiles in the African jungle (frowned upon by his assistant Coru and chief Jerry Lambert).  On the way back, Carter got his companions eaten by lions, and had to recruit a new assistant.

Going out with an old man of the tribe, the pair stumbled upon a ritual with a girl tied to the ground, and a tribe of lizard worshipers waiting to see if the lizard would bite her.  It didn't, but the two fled...only to be pursued by the spear welding natives, who killed the assistant....and injured Carter, who fell to the ground, and was surrounded by lizards.  Three weeks later he was telling his story to Strong....and the bites had mutated Carter into a lizard man! 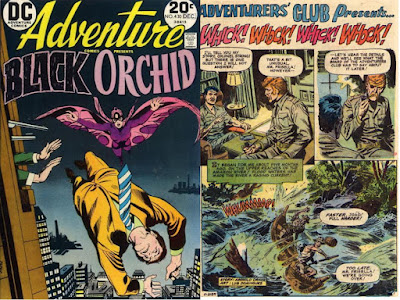 Last, but not least, a hidden tale of the Adventurers' Club (hidden under a Bob Oksner Black Orchid cover), and told by Arnold Drake and Luis Dominguez.  Here, a somewhat younger looking Strong being told a story by Mr. Frisellla, about an ill fated trip down the Amazon River, where he encountered the tribe of the Ogura, a pendulum which was the heart of the world.

Frisella, not believing the chief, Chimaga, grabs it, causing earthquakes, which allows Frisella to escape (and the tribe makes sure the pendulum starts to swing again, stopping the danger to Earth).  Strong asks Frisells where this pendulum was...which the man refuses to tell Col. Strong. 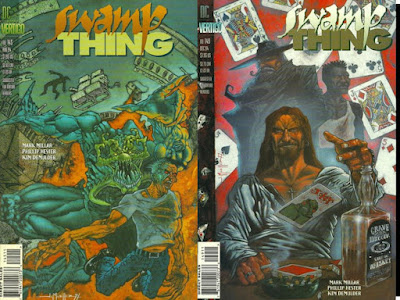 An interesting groups of adventures, and not quite the end of Colonel Strong, who later shows up as a villain in Swamp Thing, in issues #144 to #150 in the mid-1990s, setting an end to the adventures of Colonel Nelson Strong.