That little bit of magic says what better time to look back at the saga that introduced Zatanna...the search for Zatara, her father! 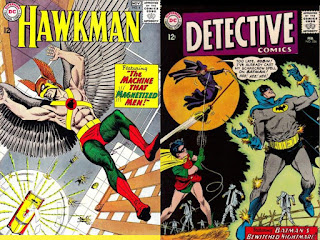 It all started in Hawkman #4 (October-November, 1964) by Gardner Fox and Murphy Anderson, as Hawkman met Zatanna, and Hawkgirl met Zatanna....and the Hawks had to bring these two together (Zatanna had accidentally split herself in two using her magic to try to find her father).  Later, in Gotham City, Batman and Robin fought a witch in Detective Comics #336 (February, 1965) by Gardner Fox, Sheldon Moldoff and Joe Giella, who was manipulated into fighting the dynamic duo by the Outsider...but, what does this have to do with Zatanna? 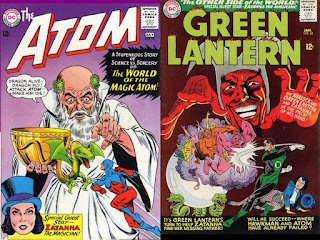 With her first cover appearance in Atom #19 (June-July, 1965) by Gardner Fox, Gil Kane and Sid Greene, Zatanna recruits the Atom for help in reaching the subatomic world of Catamoore, where she thinks she can find her father.  When the duo arrive there, they battle an old foe of Zatara's, the Druid, who claims to have stolen Zatara's magic and banish him.  They defeat the Druid, but, Zatanna must continue her quest.  Green Lantern helps out next, in Green Lantern #42 (January, 1966) by Gardner Fox, Gil Kane and Sid Greene, where Hal gets a magical power boost to his ring from Zatanna, ends up in another magical dimension (Ys), where Zatara had been sent by the Druid.  There, Green Lantern and Zatanna face the Warlock, but find Zatara had already left with the Warlock of Ys' crystal ball. 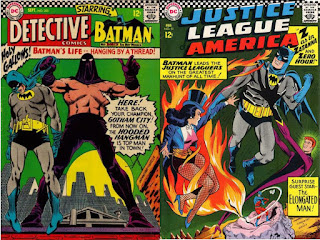 Stretching things a bit, Zatanna gets help from the Elongated Man in Detective Comics #355 (September, 1966) by Gardner Fox and Carmine Infantino, where Ralph helps her find the book of I-Ching, which will help Zatanna find her father in the dark realms.  Zatanna finally finds her father in Justice League Of America #51 (February, 1967) by Gardner Fox, Mike Sekowsky and Sid Greene, and defeats Allura (an evil elemental who caused the problem) with the help of magical duplicates of the heroes who helped her before (revealing she was the witch who bedeviled the Batman), but is nice enough to gather the real heroes to thank them for their help! 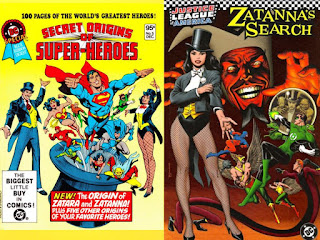 After all that adventure, a look back at the origins of Zatanna and her father, Zatanna, including how John Zatara first learned his backward magic, and how Zatanna discovered her father was missing in a special tale originally from DC Special Blue Ribbon Digest #5 (November-December, 1980) by Gerry Conway, Romeo Tanghal and Vince Colletta, rounds out the collection of JLA: Zatanna's Search (2004), which has a cover by Brian Bolland. 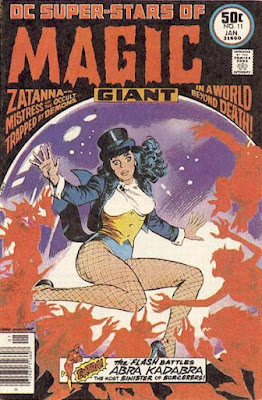 Now, if DC would just collect these stories again, perhaps adding Zatanna's back ups from Adventure Comics, Lois Lane, Supergirl and the Zatanna Special....it would be magic!

Posted by Dave's Not Here Comic Blog at 6:44 AM