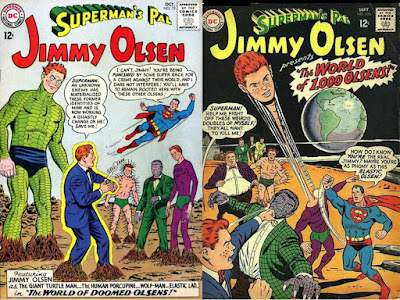 Jimmy Olsen sure has become some strange monsters in his day, but he was the menace.

But, for a couple of issues, Jimmy's monstrous transformations became a menace to him.

Let's see how these events happened...which both happened under covers by Curt Swan and George Klein.

The World Of Doomed Olsens! 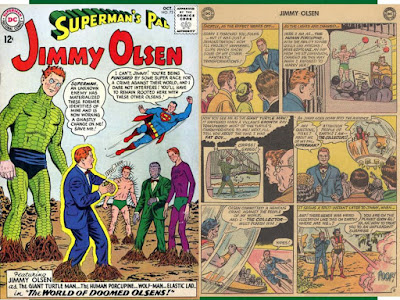 First up, in a story by Jerry Siegel, Curt Swan and George Klein from Superman's Pal, Jimmy Olsen #72 (October, 1963), Jimmy appeared on a Meet the Celebrities show, showing off a few of his past transformations. 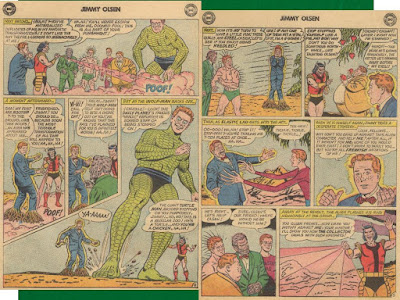 Then, suddenly, a man calling himself the Collector appeared in a travelling bubble, taking Jimmy to the far away planet of Gion-El, where the Collector manifested alternate versions of Jimmy, including the Wolf-Man, Giant Turtle Man, Human Porcupine, Fat Boy and Elastic Lad.  Except for the mute Wolf-Man, they all verbally taunted the real Jimmy (rooted to one spot), at least until Jimmy got them to turn against the Collector (at least until the Collector rooted all them too). 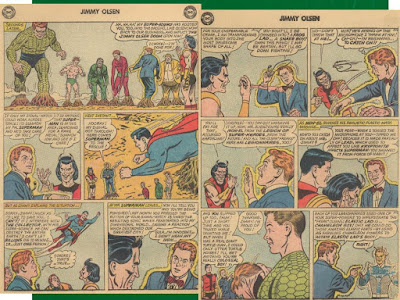 In frustration, Jimmy threw his mini-microphone at the Collector, and, as he dodged it, Jimmy figured out what was going on.  The Collector and alternate Jimmys were all members of the Legion of Super-Heroes (Mon-El as the Collector, and Proty II, Colossal Boy, Cosmic Boy, Bouncing Boy and Chameleon Boy as the Jimmys).  The Legion did this to see if Jimmy could spot the hoax.  When he did, they were to make him an honorary Legionnaire. 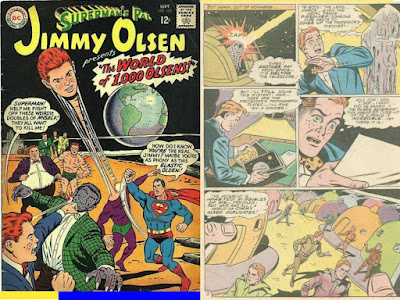 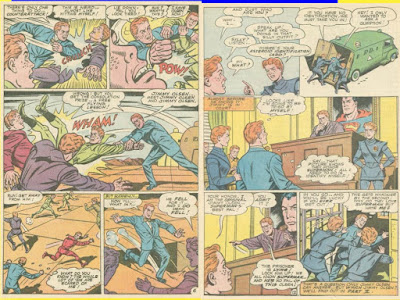 This time around, Jimmy takes the Flying Newsroom of the Daily Planet to an observatory of Professor Worthington, where the Professor is disintegrated as he tells Jimmy of his discovery of a new asteroid he has named after Jimmy.  Checking his notes, Jimmy sees the asteroid is populated by versions of him.  With Superman off planet, Jimmy thinks he has no way there, just a flying saucer arrives, willing to take him there.  Jimmy goes, but isn't given the warm greeting as he's attacked by the Jimmys of that planet. 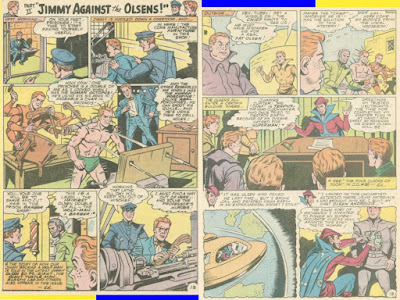 Saved by one Jimmy, he is menaced by the Giant Turtle Man, saved by Elastic Lad, then ends up in prison with the Human Octopus, Human Porcupine and Wolf-Man, escaped by donning a beard, then met by an Agent Double 5 Jimmy, who saves him, giving him a Fat Boy Jimmy disguise.  In disguise, Jimmy finds Tempus, a mad clockmaker who wants to destroy the Earth, and is using robot duplicates of Jimmy (both good and evil) to move the asteroid into Earth.  Jimmy, sends the good Jimmys against the evil ones, sending the Giant Turtle Man smashing into the machine which was sending the asteroid at Earth (and powering the robot Jimmys).  Superman arrives to investigate the asteroid, taking Tempus in custody, and Jimmy back to Earth. 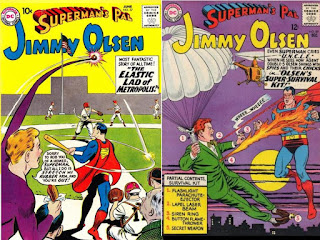 Follow these links to see Jimmy as the Wolf Man, Giant Turtle Man, Human Porcupine and Octopus, Fat Jimmy Olsen and more (though they forgot Jimmy as Superman or as a gorilla), and come back later, at some point, to see coverage of Jimmy as Elastic Lad, Flamebird and Agent Double 5!