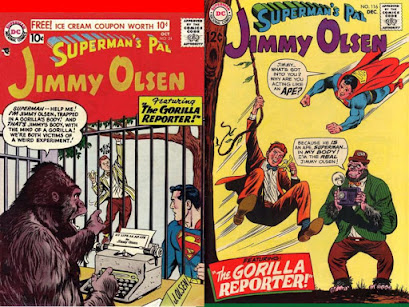 Looking back to the past, at a time when bow ties were cool, and covers with gorillas were even cooler.

So. of course, Jimmy Olsen would take advantage of that (not to mention his ability to find his way into secret labs and drink unknown formulas).....and turn himself into a gorilla!

Don't go ape....but, read on as we see how this happened in Superman's Pal, Jimmy Olsen #24 (October, 1957) under a cover by Curt Swan and Stan Kaye (and, later, the secret behind the second cover). 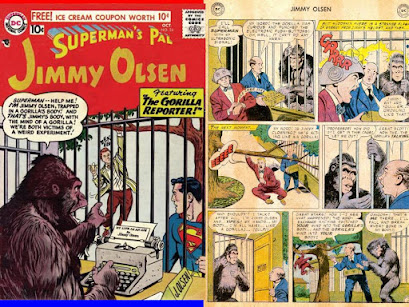 In a story by Otto Binder, Curt Swan and Ray Burnley, Jimmy Olsen was helping Professor Thorne out with his telepathizer machine (a machine which was to allow man to communicate with animals) when the gorilla, Bonzo, pushed some buttons as Jimmy was using his signal watch to call Superman...and Jimmy and Bonzo switched minds! 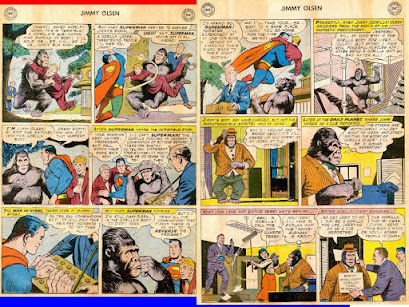 After a little confusion, Superman took the ape-minded Jimmy's body to a retreat to be safe, while the new simian Olsen got use to his new life as a gorilla!  With some precautions, Jimmy took to the beat, covering a wrestling match (of Golden George vs the Gorilla), helped out at a movie premiere (getting the gorilla star of the movie to put his paw print in cement), and even patrolling with Superman (who was having no luck finding a way to switch Jimmy and Bonzo back). 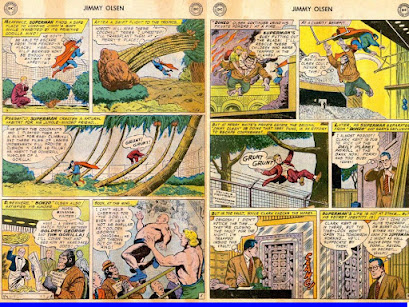 Meanwhile, Jimmy's body got loose, and headed to Metropolis (where, luckily, Jimmy caught him after saving Clark Kent from being locked in a bank vault).  Superman suggested having the ape-minded Jimmy push the buttons on the machine again....and, while he was busy, activated Jimmy's signal watch.  It was the signal watch that provided the extra power, which switched their minds again, leaving the professor and Superman to deal with a happy Jimmy, and poor Perry White to deal with his new, now fully simian reporter! 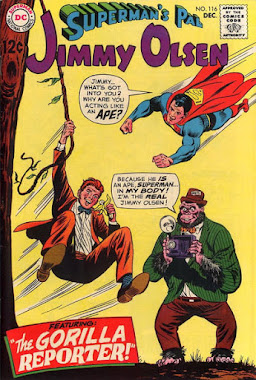 Well, that was just a reprint of the original tale, likely brought about by the realization of how cool the original one was (or, just a deadline doom leaving one third of the mag in need of a story...

..and maybe just give a gorilla cover one more try...

...this time to cash in on the popularity of the Planet of the Apes movie....released that year!). 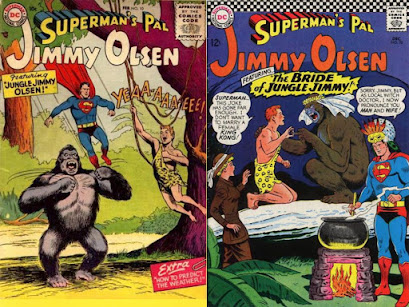 Of course, Jimmy had a few other strange transformations, as well as a few other primate encounters, but those are strange tales better off covered later....or maybe what Jimmy does in the jungle should stay in the jungle!