Kobra Two By Two The Third 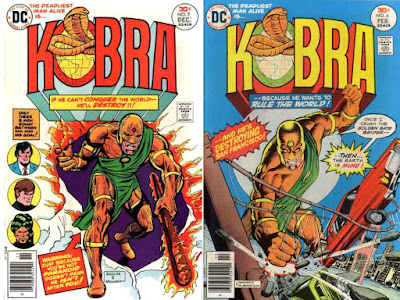 Kobra continued to menace the world of the 1970s, and in these two issues, a direction for the villain was set, as well as the opposition to him grew, getting a new champion in the fight against him!

The Eye Of The Serpent 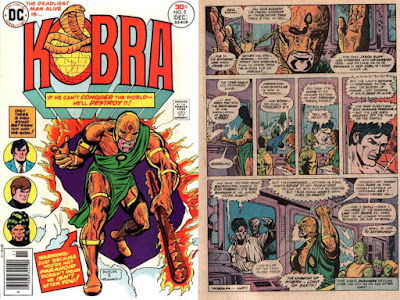 First up is Kobra #5 (November-December, 1976) with a shocking cover by Rich Buckler and Frank McLaughlin (the duo who also provided interior art for the Martin Pasko story of the Naja-Naja!).  This time around, Kobra is making plans in his Ark to destroy San Francisco, as Jason Burr is still in New York, concerned about his missing girlfriend.  Meanwhile, San Francisco detective, Jonny Double is involved in a case of his own...where a mystery woman hired him to find proof that she didn't kill her boss (whom she was having an affair with....as was another woman).  Double did too good a job, as he found her, and that boss, with him still being alive. 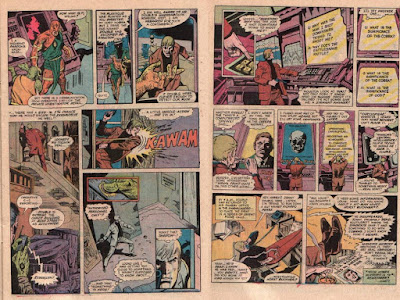 But, Jonny's cover as a taxi driver didn't allow him to follow him as he got a fare, a man in a trenchcoat...who attracted enough attention to him that Jonny couldn't dump him and follow them.  Jonny couldn't even collect the fare as his electronic meter stopped working....and the trenchcoat man left a package behind (which Jonny correctly figured out was a bomb due to it messing with the meter), and took the cab to be dumped off the pier.  The trenchcoat man was an agent of Kobra, assigned to finish Double (and failed).  Double went back to the office of the woman and her boss, though they weren't there, Double found a computer center, and got information on Lt. Perez (whose death happened last issue) and from there, followed back to Horst Buchner (from issue one). 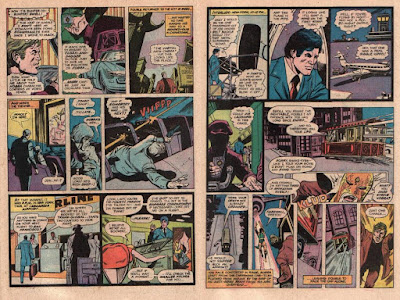 One of Jonny's contacts even gave him a way to contact Jason Burr, which Jonny did, asking him to fly out to California (which Burr planned on).  Jonny went to meet a contact after passing over the Golden Gate Bridge, but found Kobra's agents already got to him.  This led Double into direct conflict with Kobra, while Jason eventually found his way on to a shaky flight.  Jason was over Oregon when his flight demonstrated major engine trouble, while Jonny awoke to find himself strapped to the Golden Gate Bridge, where Kobra was planning on using his recently acquired solar device to power an earthquake machine to destroy San Francisco.

Need we say...to be continued?

The Crack In The World Conspiracy 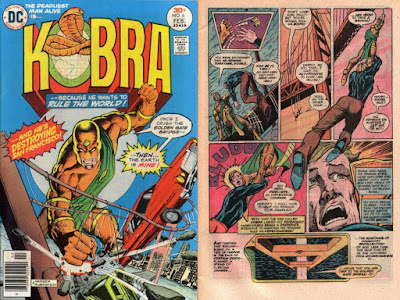 Kobra #6 (January-February, 1977) by Martin Pasko, Michael Netzer (Nasser at the time) and Joe Rubinstein (with cover also by these two, who finally would give Kobra a regular art team), started with Jonny Double facing off with Kobra on the Golden Gate Bridge. 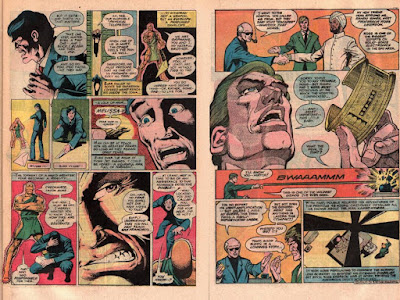 Jonny had escaped his bonds and figured the only way to save the bridge was to fight Kobra.  Jonny did, even knocking Kobra's wrist weapons off his wrist, and Jonny used it to stop the earthquake device.  Meanwhile, in air, the other passengers on the flight disappeared, and Kobra revealed himself to Jason Burr...acknowledging that he couldn't kill Burr or else die himself, Kobra manipulated Jason onto this flight to keep him busy, and to reveal that Kobra had Melissa (Burr's lady love).  Double was freed from the hospital by Randu Singh, and this pair met with Professor Ross Emerson, who helped Double figure out Kobra's wrist weapon. 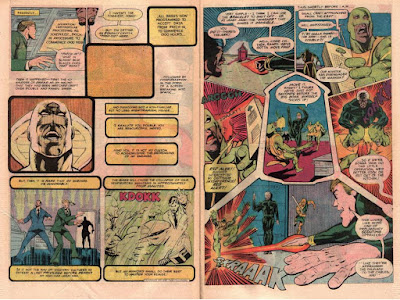 This bunch then broke into Kobra's computer center...but it was a trap to get them to come to Kobra, yet they escaped it (with info on what Kobra's attack on the bridge was for...to damage the Pacific telephone cables so Kobra could send his crew to repair them (and thus tap into global communications secretly).  This group showed up to stop Kobra by the cables, and infiltrated his Ark, and fought well against Kobra and his cult, though Kobra was surprised Double had retrieved his wrist gauntlet.  Kobra used his venom on Randu Singh, blinding the man, as Double sent the Ark into the water, and while he rescued Randu, Kobra was thought dead aboard his supposedly exploding Ark (which meant Jason would be dead too!  Yet, Kobra's forces still planned on doing the cable repair....). 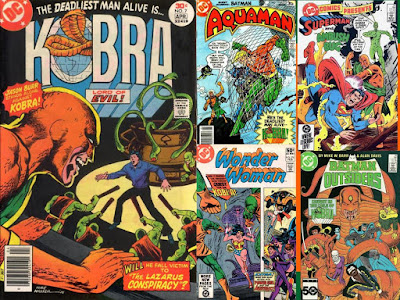 Kobra would have one more issue for his original run, but two more tales of this run.  Confused?  Bothered?  Bewildered?