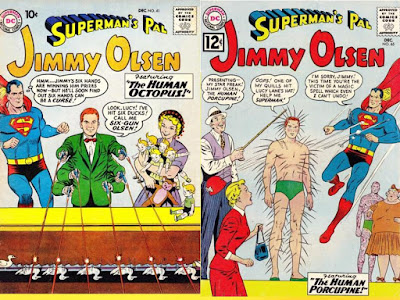 Superman's pal, Jimmy Olsen, has changed into quite a few things over the decades...

...but here are a couple of his more animalistic transformations! 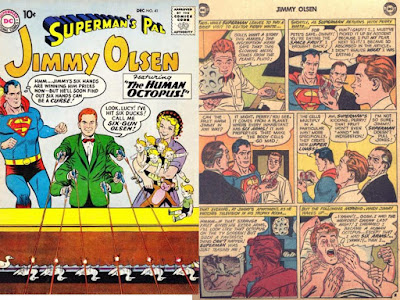 It can be handy to have Jimmy Olsen around, but even moreso after his transformation in Superman's Pal, Jimmy Olsen #41 (December, 1959) by Robert Bernstein, Curt Swan and John Forte (under a cover by Curt Swan and Stan Kaye). 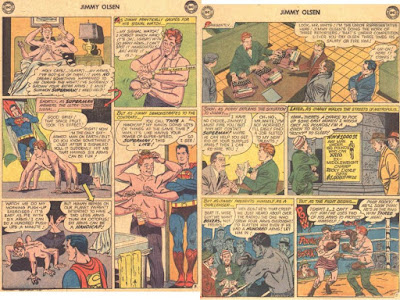 It's the usual story, Superman brings back some artifacts from outer space to show Jimmy, then leaves Jimmy alone with them.  Not paying attention, Jimmy eats one of them (instead of the pear he was eating)....and then, readers wait a night to see what happens to Jimmy!  This time, he grows four extra arms, but, Jimmy tries to see his change as a positive.

Superman warns him there will be trouble, but Jimmy is resolute.  Now, Jimmy can do three times the typing at the Daily Planet....but, union reps say he should get three times the pay....resulting in Perry White having to let Jimmy go.  Jimmy tries amateur boxing, and is able to beat his opponent, but because of the weight of his extra arms doesn't qualify to win. 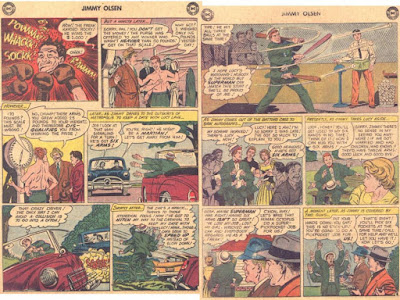 Distracted drives force Jimmy off the road, then won't pick up the six-armed man.  This makes him late for a date with Lucy Lane at the county fair....yet he exceeds at a few tricks like target shooting and baseball and finds her (only to find she can't deal with his extra arms).  Olsen then gets "recruited" by criminals to be a pickpocket for them (but still gets caught).  Superman arrives to vouch for Jimmy's innocence, and comes up with a cure....or was this all really just a dream? 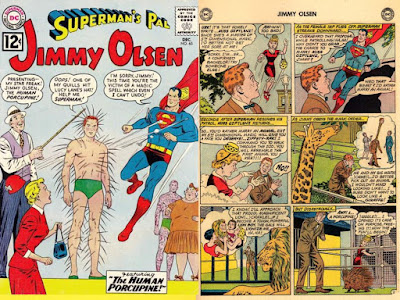 While that transformation was useful (at least for a bit), in Superman's Pal, Jimmy Olsen #65 (December, 1962) by Jerry Siegel, Curt Swan and George Klein (under a Swan/Klein cover), Jimmy got the point about how hard his transformations could be. 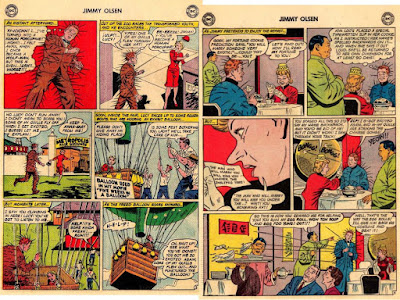 Jimmy found himself the unwanted focus of the attentions of Miss Gzptlsnz (the 5th dimensional girlfriend of Mr. Mxyzptlk), as she wanted to marry Jimmy.  Jimmy says no, then explained to Superman that he'd rather marry an animal.  Offended by that, Miss Gzptlsnz cast a spell that Jimmy would turn into the next animal he'd see....and, while Jimmy tried to maneuver that to his advantage, she let a porcupine go at the zoo, which Jimmy felt was worse than the time he became a wolf-man.

So, Jimmy grew quills (that shot off when he got excited), and chased off Lucy Lane (who tried to hide in a balloon gondola), but Jimmy followed and found her, resulting in the balloon getting free, and nearly killing the two as his quills punctured the balloon, sending them to the ground (to be saved by Superman).

Jimmy tried to make peace with Miss Gzptlsnz at a Chinese restaurant (really to get her to read a fortune cookie he rigged to make her say her name backward to send her home and undo the spell), but she was too smart for that one. 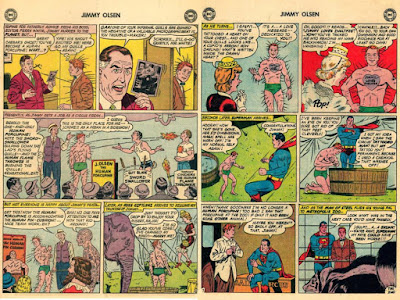 Porcupine Jimmy annoyed Perry White, and was dispatched from the Daily Planet, and tried to find work as a sideshow freak.  This worked well, but he upset the other performers like the bearded lady and tattooed man.  This gave Jimmy an idea, and he called for Miss Gzptlsnz, saying he now truly loved her and would prove it with a tattoo on his chest....which she read (and was her name backwards).  She went back to the 5th dimension and Jimmy went back to normal (and the tattoo was in non-permanent ink, so he just washed it off!). 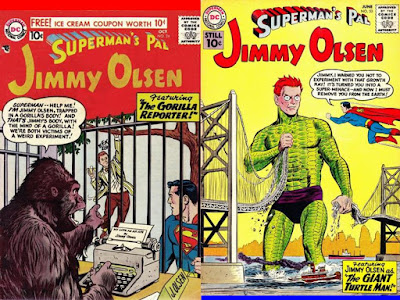 Of course, these weren't Jimmy's only times becoming more animalistic, in the past, he's been a gorilla...and even a giant turtle man!

That Jimmy is such an animal!

Posted by Dave's Not Here Comic Blog at 1:32 PM