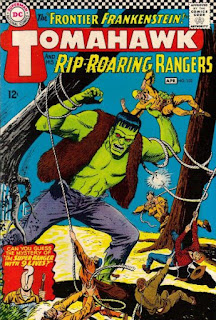 Tomahawk faced many threats trying to establish our nation during the Revolutionary War of the 1700s, but some of the odder threats he and his Rangers faced were in his later issues, when he faced an anachronism...

...that of the creature of Frankenstein (which Mary Shelley didn't create until the 1800s!).

How did this come about? 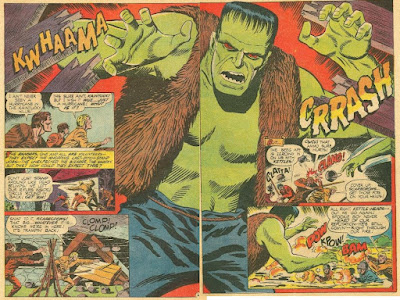 In Tomahawk #103 (March-April, 1966), by Ed Herron and Bob Brown, Tomahawk and his Rangers were trying to rest one night, when they were set upon by a large green monster!  They were able to chase him off with grenades, but what was it, and where was the missing Ranger, Big Anvil? 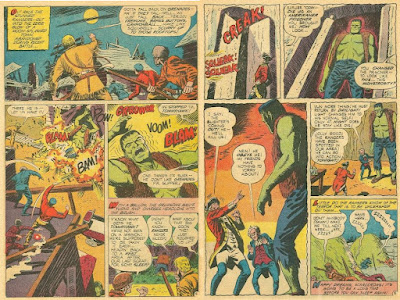 The night before, German scientist Von Skeller showed the British Army his newest experiment, where he took a captured rebel soldier and, exposing him to special chemicals, turned him into a large, obedient green monster (that would change back into a normal man every day, while the chemicals still worked in him).  After another battle with the creature in the night, the Rangers were victorious in chasing it away.  The next morning, Big Anvil catches up to Tomahawk and the Rangers, where the tired team get ready for another advance of the British Army. 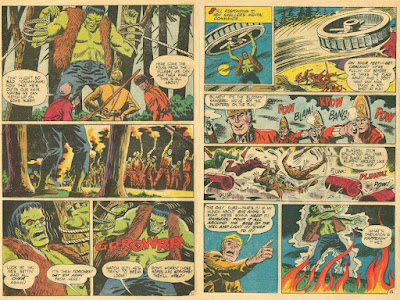 Tomahawk wants Big Anvil to use his great strength to send a big old mill wheel at the army to distract them, so Tomahawk and the rest of the Rangers can surprise the army.  Big Anvil agrees, and is ready to....until night falls, and Big Anvil changes into the big green creature!  That proves quite a distraction, as the creature throws the wheel at the Brits.  As they flee, the British fire at cannisters of oil, which Tomahawk then gets his men to do, soaking the ground in front of Big Anvil, so the night lights up as day, and he turns back into Big Anvil.

Then, the next day, Tomahawk and the Rangers just have to wait for the chemicals to burn out of Big Anvil's system so he won't change again! 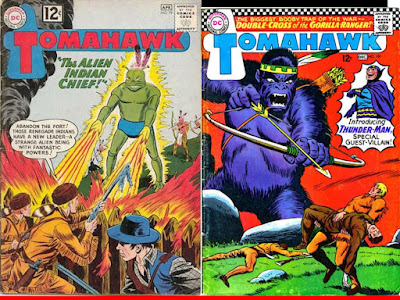 If you think that was wild, at some point, might take a look at these tales (or, maybe just check out these classic covers by Neal Adams instead)!

Posted by Dave's Not Here Comic Blog at 4:33 PM