Batman Vs. The Vampire 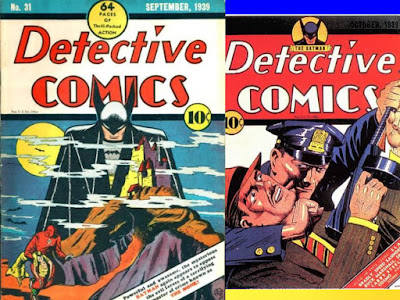 Batman has had a long history, and during the course of it, fought many incredible menaces.

They weren't all based on science and detective work.  Sometimes Batman fought the supernatural, here is the first case of that, predating Robin and Alfred, in some of the earliest appearances of Batman from Detective Comics, when Batman faced a vampire (in a story so old, they didn't even have proper titles at the time....the title of "Batman Vs. The Vampire" was added later). 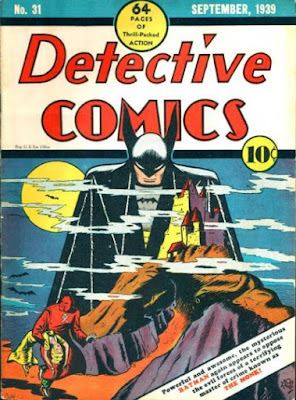 First up in Detective Comics #31 (September, 1939) by Gardner Fox and Bob Kane, Batman stops Bruce Wayne's fiancee, Julie Madison (her first appearance), from killing a man in the street....it appears she was hypnotized!

Out of concern for her, a visit to her doctor gets a recommendation to go to Europe for treatment....which she does by ship, but Batman follows in his just introduced Batgyro.  On the ship, Batman meets the Monk, who has hypnotic powers, who seems to get the better of Batman.  Leaving the area, Batman goes to find Julie in Paris, which he does, but is captured by the Monk.  Using his new tool, the Baterang (for the first time), Batman is able to escape with Julie, but the Monk escapes.

Batman follows the Monk to Hungary....and the next issue! 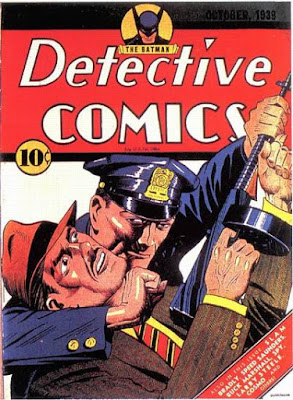 Continuing where he left off, with Detective Comics #32 (October, 1939) by Gardner Fox and Bob Kane, Batman is pursuing the Monk.

Near the Monk's castle, Batman captures Dala, a passenger in a carriage headed to the Monk's castle.  Bringing her back to the hotel where he was keeping Julie.  Batman finds Dala is a vampire, and forces her to take him to the Monk.  Batman takes the Batgyro to attack, but the Monk brings down the aircraft, and hypnotizes Batman.  Then, the Monk uses his mind control to send for Julie, so she can see the Monk throw Batman to the wolves.  Batman escapes, fashioning two silver bullets to stop the evil duo (and finding out the Monk is not only a vampire,  but a werewolf as well), and shoots the Monk and Dala, ending their supernatural existence.

Batman's secret origin, and aversion to guns had yet to be revealed, but would be in the next issue in a two page sequence. 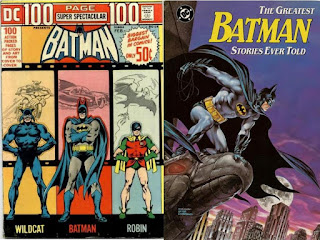 These tales have been reprinted a few times, first in the 100 Page Super Spectacular #DC-15 (February, 1973), then in the Greatest Batman Stories Ever Told from the 1980s...

...and starts off every collection of Golden Age Batman stories whether they be Archives, Omnibus, Chronicles or more! 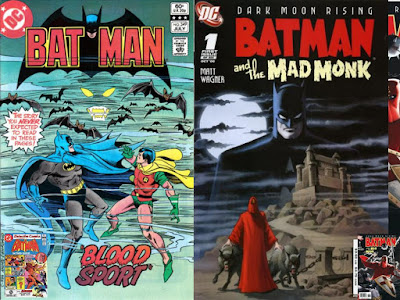 Oddly, the Monk and Dala have returned over the years, but thanks to Batman existing on alternate Earths, with the Earth-1 versions of them first appearing in Batman #346 and Detective Comics #511, respectively (with their story playing out over the next few issues), and then a more modern version showing up in Matt Wagner's 6 issue mini-series, Batman: The Mad Monk, being both a blessing and a curse to the Batman. 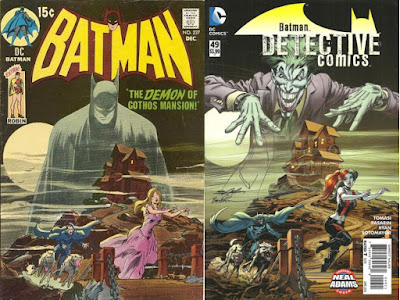 Detective Comics #31 had a classic cover, as Matt Wagner shown in the first issue of his mini-series.  Neal Adams did a couple of variants of it as well....showing the eternal appeal of Bob Kane's original cover!
Posted by Dave's Not Here Comic Blog at 3:33 AM