Superman Meets The Ghost Of Batman 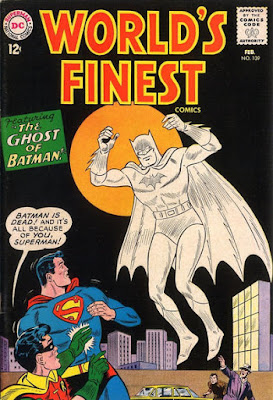 Holy ectoplasm, Batman!  It appears all the comics you've read since 1964 have been lying to you, claiming that Batman is alive, when, according to this cover of World's Finest Comics #139 (February, 1964, by Jim Mooney and Sheldon Moldoff), Batman has only been a ghost of himself!

...let's take a look inside this book, to find out what is going on. 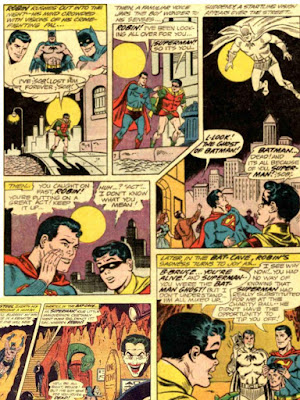 "The Ghost Of Batman" (by Dave Wood, Jim Mooney and Sheldon Moldoff) begins pretty much like any tale of the day, with Superman, disguising himself as Batman, stopping the Sphinx Gang from completing a robbery (all so that Bruce Wayne can appear with Kathy Kane/Batwoman, to allay her suspicions of his being Batman), when things go horribly wrong, in that the gang appear to have successfully kill the Batman!  Now, Superman easily escapes their trap, but....how to reveal Batman is still alive without blowing Batman and Superman's secret?

Why, Superman poses as the Ghost of Batman, while Bruce poses as Superman.

Eventually, (after a little unintentional torture of Robin, making him think Bruce was dead), the World's Finest Team lets Batwoman in on this (pretending it was all part of the original plan to capture the gang)....but, this reawakens her belief in Bruce being Batman....at least until they borrow another Wayne Manor resident to help misdirect her investigations (though, how as close up as the video shows, would anyone mistake Alfred for Batman, even in the costume....but, hey it worked a few years later on TV!). 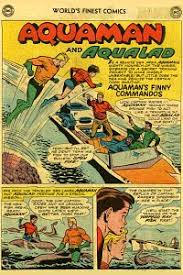 Now, there was a death in this issue, with the Aquaman/Aqualad feature, "The Doom Hunters"  by Jack Miller and Ramona Fradon, as this was the last new Aquaman story in World's Finest Comics for a time, where Aquaman has to save Tom Blake from the Daredevil's Club.

Don't feel too sorry for Aquaman and Aqualad, as by this time, they were well into issues of Aquaman's own title, where, at the time, Aquaman was well into his courtship with Mera.
Posted by Dave's Not Here Comic Blog at 3:25 AM