Perry White Shows Superman Who Is The Boss 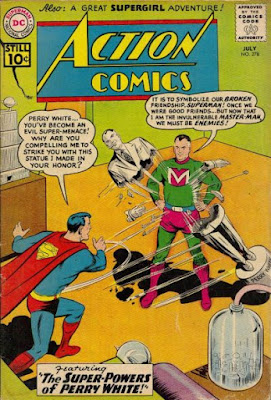 Perry White finds a strange fruit in his garden, and, after eating it, gains super powers, where he decides to become Masterman.  Really, the fruit was a delivery system for an alien named Xasnu, who has taken over Perry's body, and uses his new powers to try to finish off Superman to prepare Earth to be invaded.

Xasnu, as Perry, learns Superman's secret identity as Clark Kent, even following him to the Fortress of Solitude to attack the Man of Steel, who would have been doomed, except for the quick thinking of Supergirl... 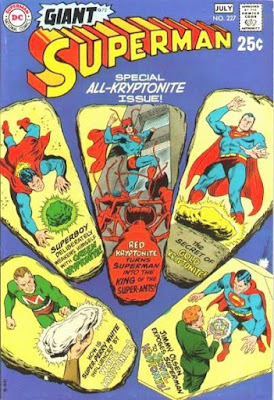 ...who exposes Perry to White Kryptonite, which kills all plant life, including the alien possessing the editor-in-chief (who has the memories of Superman's home and identity, so after Xasnu is gone, Perry remembers none of that!).

Better still, you can read this adventure, and a few more centered around the various types of Kryptonite in Superman #227 (June-July, 1970), which also has a cover by Curt Swan and Murphy Anderson!

Posted by Dave's Not Here Comic Blog at 4:12 AM