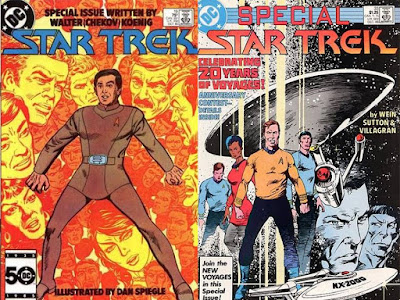 Star Trek has had a few comic series over the 5 decades of its existence, but there are a few that stand out.

Here's a couple of them from DC's first run at the cast of the Enterprise....

...and why these two issues have stood the test of time (in more ways than one!). 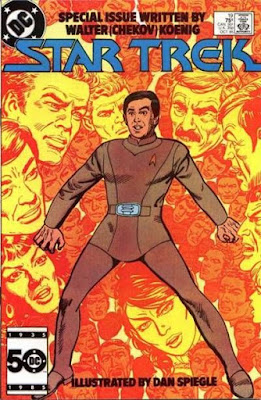 It is a rare thing when television actors get a chance to write comics, especially about their own character on a beloved show, but Walter Koenig got that chance for Pavel Chekov with DC Comics' Star Trek #19 (October, 1985) and the story of "Chekov's Choice", with art by Dan Spiegle and cover by series regulars Tom Sutton and Ricardo Villagran.

Chekov was faced with a choice (thus, the title), and had to lead the crew of the Enterprise in a mutiny to save the ship from a collision with an asteroid.

This issue also showed that DC Comics had, wisely, gotten legal rights from Paramount to cover all eras of Star Trek at the time (unlike the previous Marvel Comic series, which only covered the era of Star Trek: The Motion Picture). 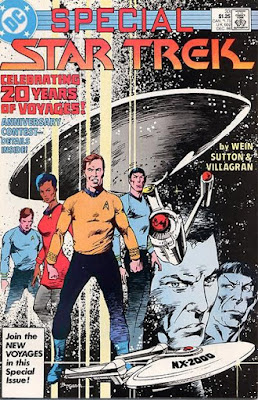 The comic took advantage of that fact with Star Trek #33 (December, 1986) and "Vicious Circle" by Len Wein, Tom Sutton and Ricardo Villagran (and cover by Jerry Bingham), when the original series crew met with the movie era crew in a special, 20th Anniversary story!

Thanks to an early time travel adventure of the Star Trek crew from the episode, "Tomorrow Is Yesterday", Kirk and crew came from the 1960s, overshooting their own time to the time and ending up in the time between Star Trek III: The Search For Spock and Star Trek IV: The Voyage Home.  This caused many time anomalies and both crews had to work together to get the original Enterprise crew to their rightful place in time.  The crew used another time travel device to help them out (which won't be spoiled here, but it was from an episode fans remember forever)...and special note, you can see the differences in the crews, because Chekov wasn't around during those early, first season episodes, yet Yeoman Janice Rand was. 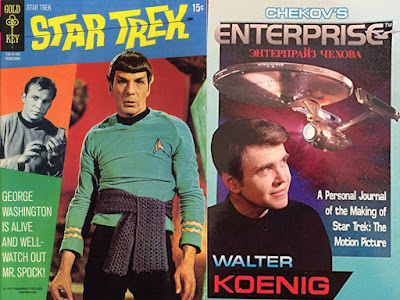 This points out a problem from Star Trek II: The Wrath of Khan....in how does Khan recognize Chekov, but that's one anomaly beyond our reckoning.  The issue is also special, as writer Len Wein had written original Gold Key Star Trek issues, making him the first Star Trek comic writer to have written Star Trek comics to go from Gold Key to DC (with Mike W. Barr the first in doing duty from Marvel to DC).  Then, in 1991, Walter Koenig wrote a book, detailing his experiences on making Star Trek: The Motion Picture, entitled "Chekov's Enterprise".  Quite a vicious circle of time travel for both writers!