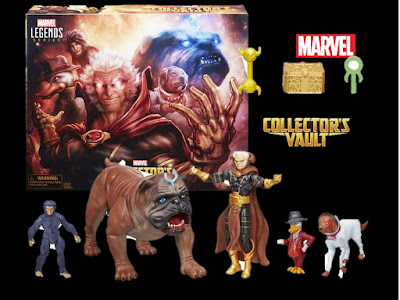 This 2016 San Diego Comic Con exclusive should appeal to the Marvel Legends 3 and 3/4th collector, as it contains an action figure of....the Collector!

The Collector's Vault is a set of figures, including the Collector, Devil Dinosaur's pal Moonboy, Inhuman dog Lockjaw, Howard the Duck, and Cosmo...as well as the Wand of Watoomb, the Casket of Ancient Winters and the Zodiac Key (longtime Marvel Team-Up, Dr. Strange fans, Thor fans and S.H.I.E.L.D. and Avengers comic fans should know what these are....if not, trust me, this is cool!). 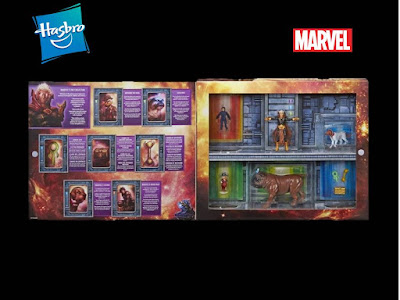 This set is scheduled to run for $69.99 at the Hasbro booth, and may also appear at the Fan Expo Canada this year (making it not quite exclusive, but a great collector's piece, nonetheless).
Posted by Dave's Not Here Comic Blog at 4:49 AM