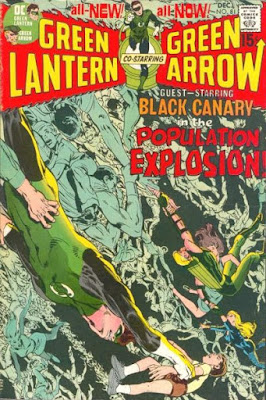 Today, July 11th, is World Population Day....and the idea behind this is reflected in Green Lantern #81 (December, 1970) in "Death Be My Destiny!" by writer Denny O'Neill, penciller Neal Adams and inker Dick Giordano.


In this story, Green Lantern Hal Jordan, Green Arrow and Black Canary take the Old-Timer (a Guardian of the Universe that had been helping the "Hard-Traveling Heroes") back to Oa, for him to be judged by the other Guardians of the Universe.

The Guardians stripped the Old-Timer of his immortality, and sentenced him to go back to Maltus, the original home of the Guardians. 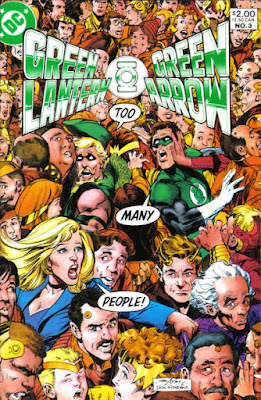 Once there, the heroes saw the problems of over population first hand, thanks to Mother Juna, stopped her efforts, and the Old-Timer decided to work on helping the people find themselves again.

This story has been reprinted a few times, most notably under a new cover in December, 1983 by Neal Adams and Dick Giordano, in Green Lantern/Green Arrow #3, with the simple phrase of "Too...Many...People!" as a part of DC's 1980s Baxter reprint series, that collected major stories in a new, dynamic, ad-less format, paving the way for tradepaperback collections, in this case, the relevant comics of Green Lantern from the late 1960s/early 1970s, running from Green Lantern #76 to Green Lantern #89.
Posted by Dave's Not Here Comic Blog at 3:01 AM