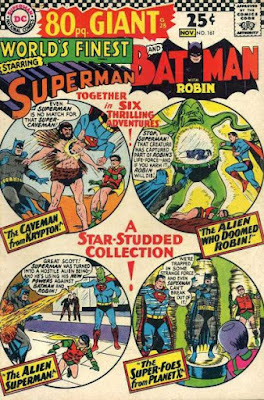 Superman and Batman worked together quick a bit during the 1960s....so much so, that they had the ability to collect reprints of their gatherings together, first in a special 80 Page Giant, then, as 80 Page Giants under the World's Finest Comics logo, starting with this issue, World's Finest Comics #161 (October, 1966) with a cover by Curt Swan, inked by Stan Kaye and Sheldon Moldoff!


What a collection of stories for this first collection within World's Finest....

....with Superman, Batman and Robin working together to face an odd collection of foes! 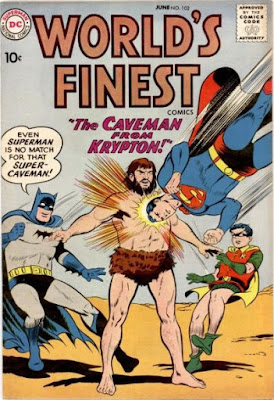 The first reprint in this issue takes us back to World's Finest Comics #102 (June, 1959), and even further to give us "The Caveman From Krypton", written by Bill Finger, pencilled by Dick Sprang, with inks by Charles Paris (and a cover by Curt Swan and Sheldon Moldoff).

This story sees the World's Finest team facing off against a caveman from Krypton, crashing into the Earth, gaining Superman-like powers, and becoming a menace, first because he didn't understand, then by the manipulations of a crook named Pete Waller.  The caveman was killed by Kryptonite, which Batman saved Superman from (and Superman was beginning to meet more people from Krypton, as he had just met his cousin, Supergirl, the month before in Action Comics #252). 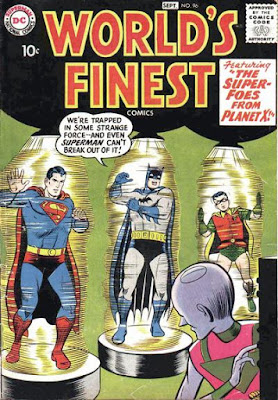 Next up is World's Finest Comics #96 (September, 1958), with the story of "The Super-Foes From Planet X", written by Edmond Hamilton, pencilled by Dick Sprang and inked by Stan Kaye, under a cover by Curt Swan and Stan Kaye.


Superman, Batman and Robin face off against a barrage of super-foes, including a solar sponge, a storm top, a crawler and Robot J-47...all under the direction of the Aliens from Planet X, who were using the heroes to learn survival skills that their race had lost over time.  Could have just asked for help.... 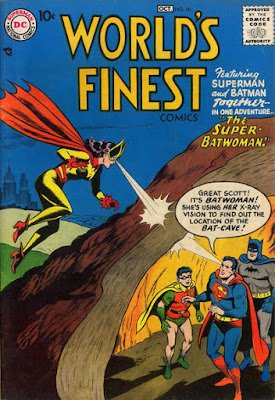 Next reprinted in this collection is World's Finest Comics #90 (September-October, 1957) with "The Super-Batwoman" written by Edmond Hamilton, pencilled by Dick Sprang and inked by Stan Kaye, all under a cover by Curt Swan and Ray Burnley.

This time around, Superman, Batman and Robing were looking for Elton Craig, a foe that they had faced before (in World's Finest Comics #87), who used dangerous pills to give himself super powers.  Worried that he might have one more pill left, the team searched frantically for their foe, but it was Batwoman (Kathy Kane, an independent heroine who also protected Gotham and was enamored of Batman) who found him (though Batman had told her to stay out of this case in concern for her safety).  Batwoman takes Craig's pill to prevent him from doing so, and gains super-powers, which Batman warns her as being dangerous.  Batwoman is upset by her treatment by Batman, and decides to find out Batman's and Superman's alter egos.  This leads her looking for the Bat Cave, and a little trickery with Batman disguising himself as Clark Kent, but eventually, Kathy's powers wear off and she is left without knowledge of the secret identity of either hero.  Batman does promise to let her help in more cases! 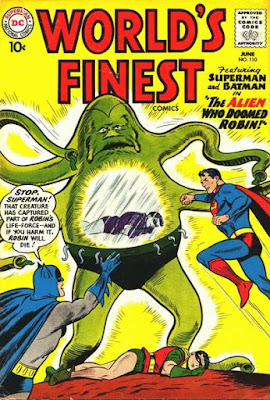 With World's Finest Comics #110 (June, 1960) and the story of "The Alien Who Doomed Robin" by writer Jerry Coleman, penciller Dick Sprang and inker Sheldon Moldoff (and a cover by Curt Swan and Sheldon Moldoff), you can see why Batman would be concerned about the safety of humans who help in his cases with Superman.

An alien arrived, looking to take buildings for an exhibit he wanted to set up on an asteroid, and to further his scheme, he bonded with Robin, causing any harm visited on the alien to be shared with the Boy Wonder!  Batman has to work on keeping Robin safe and figure out a way to break the connection why Superman deals with the alien...which all eventually works out, defeating the invader as well as keeping the young lad safe. 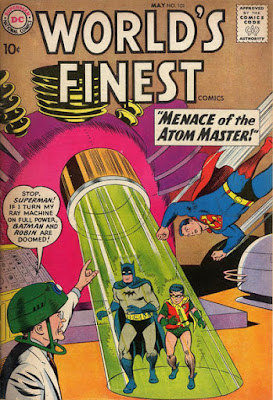 World's Finest Comics #101 (May, 1959) sees the World's Finest Team face off against "The Menace Of The Atom-Master" by Bill Finger and Dick Sprang, under a cover by Curt Swan and Stan Kaye.

Metropolis and Gotham are plagued by illusions of Superman and Batman, and then other illusions which allow crooks to escape during the confusion.  Batman uses clues left behind to track the mastermind behind this, the Atom-Master, with the heroes defeating the menace.  But, this was not the last time Superman would face the Atom-Master, as this villain refused to be forgotten! 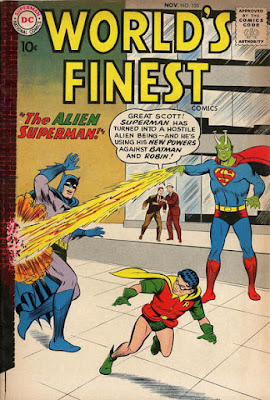 Last, but not least in this collection of Superman/Batman team-ups is World's Finest Comics #105 (November, 1959) with "The Alien Superman" by writer Bill Finger, penciller Dick Sprang and inker Charles Paris, with the cover by Curt Swan and Stan Kaye.

Batman and Robin are fighting crime while Superman stops a meteor, which Batman then takes back to the Bat Cave to study.  Superman becomes weak, and spins himself into a cocoon (an odd occurrence, even for Superman), and seems to come out even more alien, with new powers and no memory of his life.  Batman finds out this was a hoax brought on by the alien, Khalex, who is working with some Earth criminals (and is weakened by the meteor that Superman gave to Batman).  Superman recovers the meteor, and the World's Finest team work together to stop the criminals.  Still, this must have left in Batman's mind the thought of having to deal with a rouge Superman.... 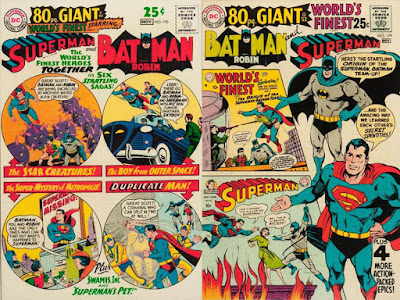 ....and we will, but this ends this issue, so this will be a good enough place to stop for now....and all of these tales are spread out in the 3 volumes of the World's Finest Comics Archives!

Posted by Dave's Not Here Comic Blog at 3:06 AM