The Early Days of Vixen 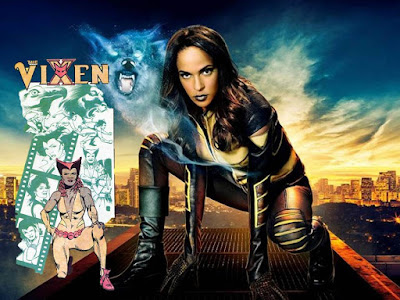 Vixen has made the transition from comic book hero, to animated character, and finally, thanks to CW's Arrow (as played by Megalyn Echikunwoke), to a live action character!

It's been a long trip for the mystic hero, and let's take a quick look back to where it all started! 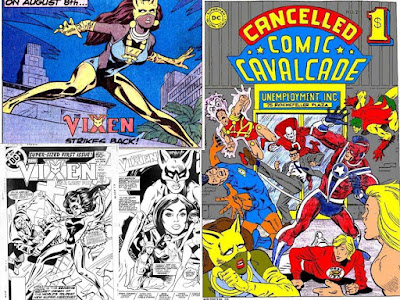 Vixen #1 was suppose to come out on August 8th, 1978 (to be cover dated November, 1978, written by Gerry and Carla Conway, with art by Bob Oksner and Vince Colletta)....but that was the year of the DC Implosion, wherein DC cancelled many titles in production (including Prez, Shade the Changing Man, Black Lightning, Steel the Indestructible Man, Kamandi, the Secret Society of Super-Villains, issues of Showcase with Deadman and the Creeper...and the fated to not be published Vixen #1! 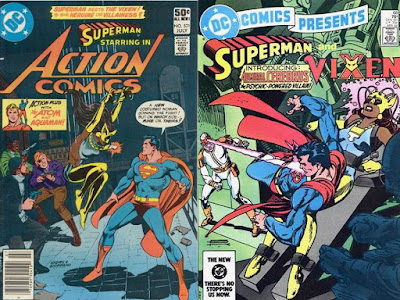 Still, DC eventually found a home for Vixen, premiering the character in a 4-color comic, this time, owing her rescue to Superman, and appearing in Action Comics #521 (July, 1981) in "The Deadly Rampage of the Lady Fox" by Gerry Conway, Curt Swan and Frank Chiaramonte, with model Mari McCabe using the mystic powers of her Tantu Totem, chasing animal poachers like the Mule from Africa to Metropolis and back again!  Vixen returned to pair with Superman again, facing off against the mental powers of Admiral Cerebrus in "Destiny's Children" in DC Comics Presents #68 (April, 1984) by Gerry Conway, Curt Swan and Murphy Anderson, but more was afoot for the lady with animal powers.... 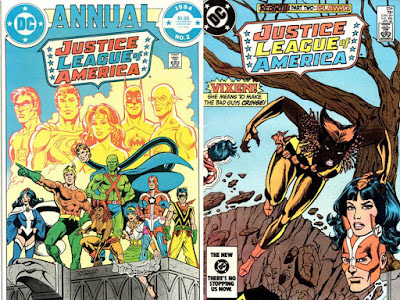 Vixen joined the Justice League of America as it restructured after an alien invasion, and moved to Detroit in Justice League of America Annual #2 (1984, by Gerry Conway, Chuck Patton and Dave Hunt).  What eventually came to be known as the Motor City Justice League included older members Aquaman, Martian Manhunter, Elongated Man and Zatanna, and added a new Steel (grandson of the original Steel, who supplied them their HQ, the Bunker, in Detroit), Vibe and soon after, Gypsy. 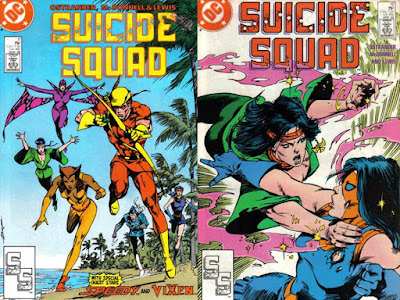 Vixen took some time off, working on her modeling career....but trouble followed her around, and with Suicide Squad #11 (March, 1988 by John Ostrander and Luke McDonnell), saw drug kingpins attacking the beach where she was working!  Vixen then worked with the Suicide Squad (which was also getting help from Speedy/Roy Harper, who was working with the government at the time to stop drug pushers), and joined the team in the next issue after stopping the kingpin (and witnessing a battle between Nightshade and the Enchantress...). 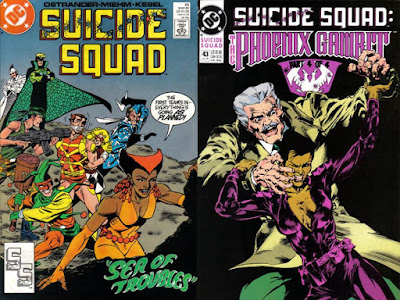 Vixen served well in the Suicide Squad, and soon formed a bond with Ben Turner, the Bronze Tiger, one of the too few good guys that held herd on the villains (like Deadshot, Count Vertigo and Captain Boomerang) that the Suicide Squad used for their missions.  Vixen worked with the team until it reorganized with Amanda Waller going to jail in Suicide Squad #39 (March, 1990), and occasionally returned to help the team after that (though under protest, not wanting to work with Amanda Waller, and now on the outs with Ben Turner), including battles against Kobra and his cult (and with a new costume), as well as during Wonder Woman's War of the Gods. 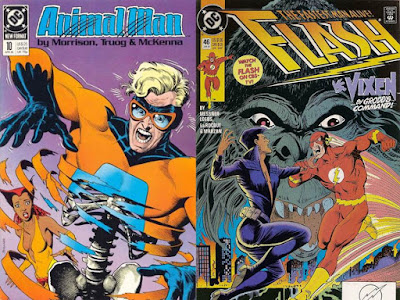 While working with the Suicide Squad, Vixen met other heroes, helping Animal Man define himself in Animal Man #10 to #12 (April to June, 1989)... 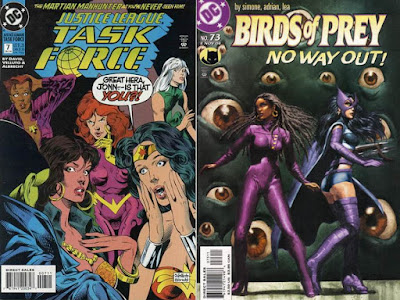 Vixen soldiered on as a frequent guest star in the DC Universe, returning to help the Martian Manhunter, Dolphin, Maxima, Wonder Woman and Gypsy in Justice League Task Force #7 and #8 of the 1990s, joining Checkmate to help against a new Hawk and Dove in the Hawk and Dove mini-series of 1997/1998, working with the Ultramarines in JLA #26, helping Wonder Woman and many female heroes defend Manhattan during Circe's attack in Wonder Woman #174 and #175 of 2001, working with the Birds of Prey (including Black Canary and the Huntress) in Birds of Prey #69 to #73 in 2004... 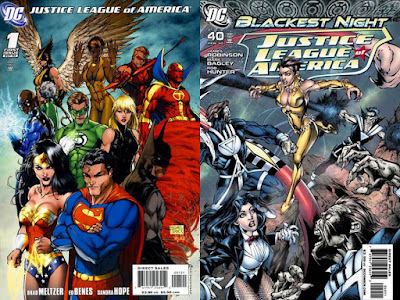 ....and popping up here and there to finally resettle for a time in the Justice League of America with its relaunch, in Justice League of America #1 (October, 2006), along with Arsenal (Roy Harper), Black Canary, Hawkgirl (Kendra Saunders), Black Lightning, Green Lantern (Hal Jordan) and Red Tornado, along with the DC trinity of Superman, Batman and Wonder Woman, serving with the team through the Blackest Night event (where she faced former members lost in her original Justice League membership). 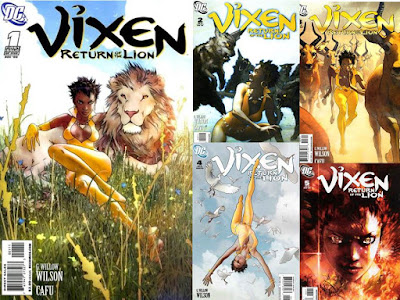 Best of all, Vixen was finally able to get her own series (though only a 5 issue mini-series) entitled Vixen: Return of the Lion, which ran from December, 2008 to April, 2009, written by G. Woodrow Wilson, with art by Cafu, dealing with Intergang, animal poachers and mystic menaces in Africa.

It might have taken over 30 years, but Vixen finally got her own title, and that is good!
Posted by Dave's Not Here Comic Blog at 3:45 AM