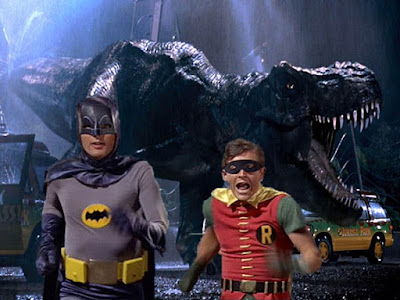 If you think having the Gotham guardian of Batman facing off against dinosaurs is an odd idea.... 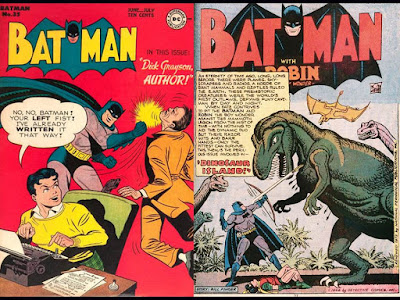 Back in the earliest days of Batman (Batman #35, June-July, 1946 by Bill Finger and Bob Kane), Batman and Robin went to "Dinosaur Island" at the request of Murray Wilson Hart to try out his new exhibit which included robot dinosaurs.  Batman and Robin volunteered to be the prey on a mock hunt, not knowing that criminal Stephen Chase took over the controls, and made it much more deadly! 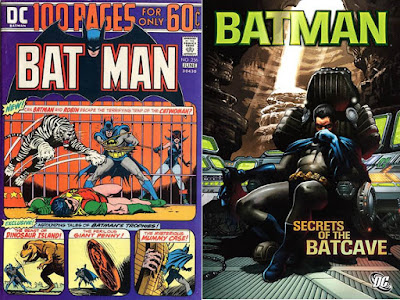 This case proved to make a lasting impression on Batman, as one of the dinosaur robots ended up as trophy in the Batcave!  This story was also reprinted a few times, and can be read if you find a copy of Batman #256 (May-June, 1974) or in the Secrets of the Batcave tradepaperback, which came out in 2007.


The Kids Get In The Act 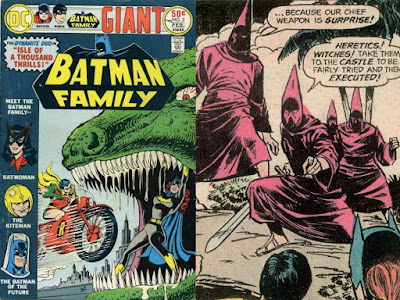 Not to be outdone, but Batgirl and Robin went to the "Isle of A Thousand Thrills" in Batman Family #3 (January-February, 1976, by Elliot S. Maggin and Jose-Luis Garcia Lopez), where the dynamite duo faced off against not only dinosaurs, but future soldiers and even the Spanish Inquisition while there!  Holy Monty Python, Batman (because no one expects the Spanish Inquisition)!  This story is also important, as this is when Batgirl and Robin learned each others' alter egos of Barbara Gordon and Dick Grayson! 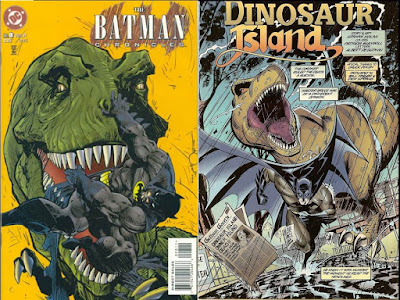 In light of a few decades of publishing history, Batman's history changed a few times, so the story of how the robot dinosaur changed a little over the years.  Batman Chronicles #8 (Spring, 1997) gave us the updated (that is, post Frank Miller's Batman: Year One) version of how Batman got that dinosaur trophy (without Robin), still with Murray Hart (but dead this time) and Stephen Chase as the villain in this well told tale by writer and artist Graham Nolan (who gave thanks to Chuck Dixon, as well as Bill Finger and Dick Sprang) for the inspiration, and we can all thank Graham Nolan for doing this!

Bill Finger and Dick Sprang added so much to Bob Kane's Batman, that we all should be thankful for what they've done!  Take a look at this wonderful work by Dick Sprang lithograph done for DC in 1995.... 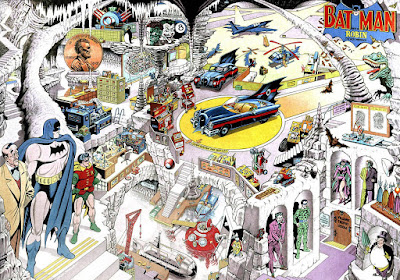 ...just be happy we've been invited along for the ride!  Graham Nolan had Alfred summed up the best reason for keeping the incredibly large dinosaur trophy (and this is one of the great secrets of the Batcave, one not even gotten in Batman #203)..."Master Bruce wondered if what he does make a difference.  It does.  And now he will be able to see it". 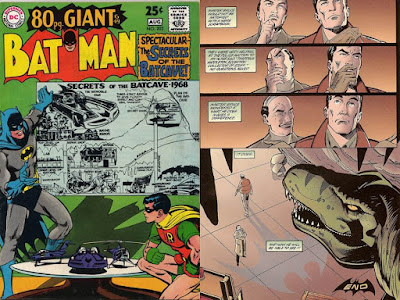