Taking a moment to remember the fathers of the World's Finest super-heroes, Superman and Batman....Jor-El and Thomas Wayne. 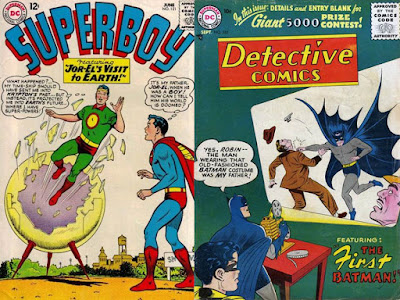 Though no longer with them, their dads helped to make them into the heroes they became and continued to effect their lives after they were gone, as shown on these covers, with Jor-El on Superboy #121 (June, 1965 by Curt Swan), and Thomas Wayne on Detective Comics #235 (September, 1956 by Sheldon Moldoff).
Posted by Dave's Not Here Comic Blog at 5:00 AM