JSA Opposite: Injustice Society of the World Part 2 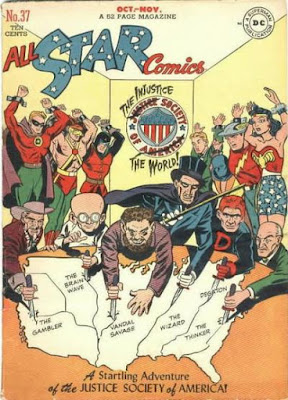 Just had too much villainy for one article, so, continuing with the charter members of the Injustice Society of the World...the most vile villains of the Justice Society of America that premiered in All-Star Comics #37 (October-November, 1947 by Robert Kanigher and Irwin Hasen).  Already covered are Vandal Savage, the Gambler and the Thinker...here are the rest! 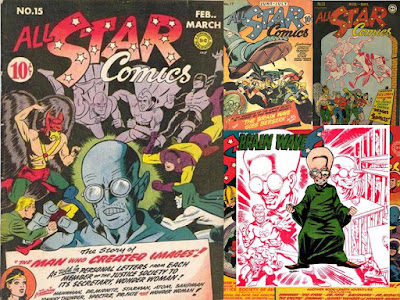 Henry King was just a kid when he discovered he could create images with just his mind...and kept working at developing his brain over the years, becoming a psychologist, setting up a practice in New York and deciding to influence others to commit crimes for him as Brain Wave.

Influencing the villain Professor Elba and setting up the illusions of war for All-Star Comics #8 and #11, Brain Wave first attacked the JSA as "The Man Who Created Images" in All-Star Comics #15 (February-March 1943, by Gardner Fox and a team of artists including Joe Gallagher, Sheldon Moldoff, Stan Aschmeier, Jack Kirby, Ed Dobrotka, Bernard Baily and Howard Sherman), wherein they are saved by their girlfriends and Wonder Woman!  Brain Wave returns in All-Star Comics #17 (June-July, 1943), with "Brain Wave Goes Berserk", using a device to shrink the JSA, and as they almost captured him, getting away in an explosion.  Henry King returned one last time alone in the Golden Age, with All-Star Comics #30 (August-September, 1948) by getting them to have their minds tested, and subjecting the team to "The Dreams of Madness"! 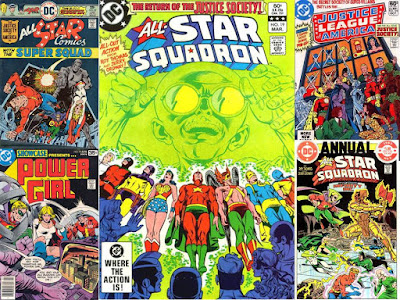 After working with the ISW, Brain Wave didn't return until Power Girl joined the JSA, with All-Star Comics #58 and #59 (in 1976, and showed off a new illusionary form), and was part of the group attack on the JSA in All-Star Comics #66 (May-June, 1977), and a plot against Flash and Green Lantern foiled by Power Girl in Showcase #97 to #99 (February to April, 1978).  Brain Wave joined up with Ultra-Humanite's Secret Society of Super-Villains for Justice League of America #195 to #197 (October to December, 1981), trying to wipe Earth-2's heroes out of existence (and failing), but Brain Wave, along with the Mist, Rag Doll, the Monocle and Psycho Pirate went back in time to the 1940s to work with an earlier Ultra-Humanite (and his crew which included Deathbolt and Cyclotron), which helped form Infinity Inc. (all in All-Star Squadron #26 and Annual #2 of 1983, as some of Brain Wave's earlier 1940s actions came to light in All-Star Squadron #17, #19 and #20 published in 1983). 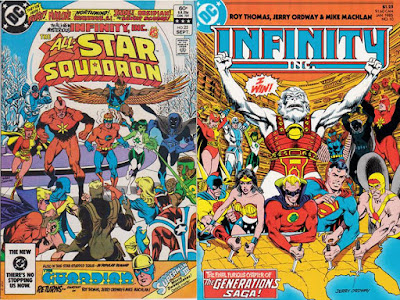 Brain Wave met his end facing off against the Ultra-Humanite in Infinity Inc. #9 and #10 (December 1984 and January, 1985), but not before passing on more of his power to his son, Brainwave Jr., who was also instrumental in forming Infinity, Inc. and wanted to be a hero (though likely his increased power made Henry King Jr. a little crazy, as he formed a Legion of Doom to fight Captain Atom and his Justice League in Extreme Justice #14 to #18)! 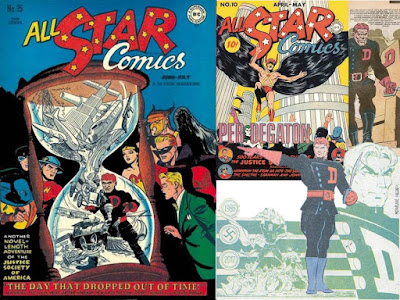 Per Degaton was just a lowly lab assistant, working with the Time Trust, cleaning test tubes, and had been doing menial tasks for years...until 1947, when Professor Malachi Zee invented a time machine and Degaton tried to use it to take over the world, until he was stopped by the JSA (all in All-Star Comics #35 (June-July, 1947, by John Broome and the art team of Irwin Hasen, Lee Elias, Paul Reinman, Joe Kubert and Frank Harry).  The trick here was that the JSA reversed time, so Degaton was back to washing test tubes in "The Day That Dropped Out Of Time!".  Inexplicably, Degaton was back to menace the JSA as a member of the ISW soon after, but there was more to his story.... 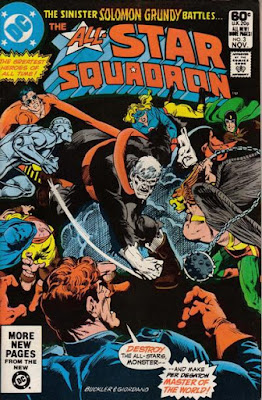 Per Degaton had been working for the Time Trust since the days of All-Star Comics #10 (April-May, 1942), getting nowhere....but still having occasional flashes of ideas in 1947, where he tried time travel again, gathering then current (1947) JSA foes like Sky Pirate, Solomon Grundy, the Monster, Professor Zodiac and Wotan, to stop the Justice Society on December 7th, 1941 (which is what prevented these heroes from stopping the tragedy at Pearl Harbor).  Instead, Degaton unknowningly inspired President Franklin D. Roosevelt to have all United States heroes band together as the All-Star Squadron (all revealed in Justice League of America #193 of August, 1981 and All-Star Squadron #1 to #4 of September to December, 1981)..but again, at the end of this adventure, Degaton didn't remember the full details and went back to washing test tubes... 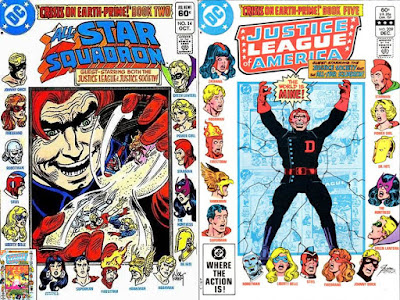 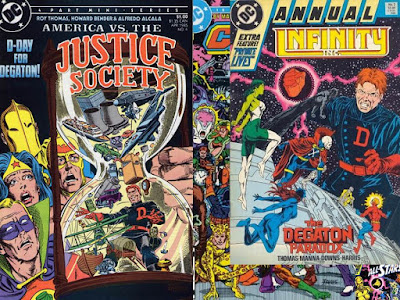 Eventually, Degaton grew tired of the test tubes, murdered Prof. Zee...but Zee ended up in taking the time machine with him!  Somehow, Degaton convinced the ISW to let him in, and then Degaton ended up destitute, being found by Brain Wave in All-Star Comics #59 (March-April, 1976), and mostly waiting in jail for his final attempt against the JSA in America vs. the Justice Society #1 to #4 in January to April, 1985...wherein the original Batman's diary was found, accusing the JSA of being Nazi collaborators!  This was not true, and the story ended with Per Degaton's death (but, this was around the time of the Crisis on Infinite Earths, and Degaton showed up their as well...and as history was being rewritten, Degaton's was as well....with Degaton being alive and well as of Infinity, Inc. Annual #2 of 1988, led up to from Young All-Stars #12 to #14 and Young All-Stars Annual #1 of 1988 and even another 1940s pre-time travel appearance in Young All-Stars #28 of August, 1989). 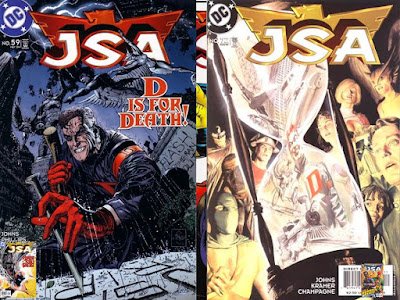 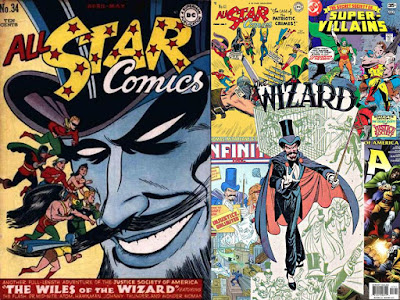 The Wizard premiered in All-Star Comics #34 (April-May, 1947 by writer Gardner Fox and the art team of Irwin Hasen, Joe Kubert, Frank Harry, Lee Elias, Harry Lampert and Paul Reinman) in "The Wiles Of The Wizard", posing as Mr. W. I. Zard and offering the JSA money to capture villains (which they wouldn't accept as it would be too tempting to the new villain, the Wizard!), and the Wizard has cast quite a spell of villainy for decades on, returning as a founder of the Injustice Society of the World in All-Star Comics #37 (October-November, 1947) and being their only return member in All-Star Comics #41 (June-July, 1948)!

The Wizard even menaced the JSA members individually, casting a spell on Superman to remove his powers (which ended up allowing Clark Kent to marry Lois Lane), and kidnapping Larry Lance and Black Canary's daughter (who ended up becoming the second Black Canary). 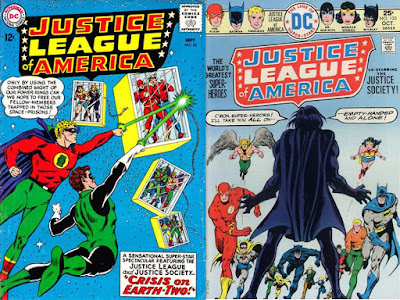 The Wizard was also a founder of the Crime Champions to be involved in the first JLA/JSA Crisis of Justice League of America #21 and #22 (August and September of 1963), with the Fiddler and Icicle (and later additions to the ISW) of Earth-2, and Chronos, Dr. Alchemy and Felix Faust as JLA/Earth-1 villains.  Wizard returned to the ISW with Justice League of America #123 and #124 (October and November, 1975), and likely soon around that time, the Injustice Society of the World likely realized that they needed new villainous blood to help them defeat the JSA. 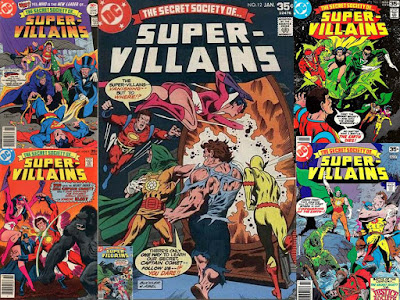 While the Injustice Society menaced the JSA in All-Star Comics #63 to #66 (1970s), the Wizard was on Earth-1, working with and then leading the Secret Society of Super-Villains (Secret Society of Super-Villains #1 through #15, except #2, from May-June, 1976 to June-July, 1978), with the Wizard getting extra power (as his magical might was waning on Earth-1) from the Sorcerer's Treasures (originally found in World's Finest Comics #103 of August, 1959), and along the way, Wizard worked with villains like Captain Cold, Gorilla Grodd, a new Star Sapphire, Matter Master, Felix Faust, Lex Luthor, Blockbuster, Reverse-Flash and the Floronic Man, and even running afoul of villains like Darkseid and the Crime Syndicate of America while fighting Captain Comet. 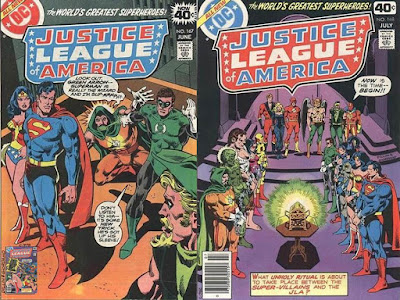 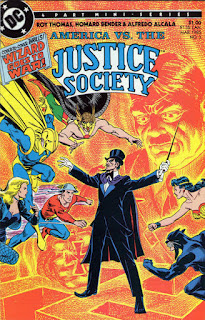 The Wizard dumped the Invisibility Cloak, Energy Prism and Power Gloves when he returned with the Crime Champions to work with the Earth-1 Johnny Thunder in Justice League of America #219 and #220 in October and November, 1983...

...then continued to work without them, testifying against the JSA in the third issue of America Vs. The Justice Society (March, 1985)..

...and he could have used them, as William Asmodeus Zard was easily defeated by Dr. Fate!  Wizard was also one of the sorcerer's recruited to help save the Earth in Crisis on Infinite Earths #12 (March, 1986), but working with heroes was sort lived. 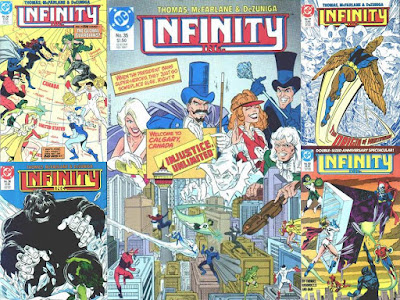 Wizard helped form Injustice, Unlimited (a next generation of the Injustice Society of the World), to face off against Infinity, Inc. (the inheritors of the JSA), starting with Infinity, Inc. #34 to #37 (January to April, 1987) as well as with the Lorelei in Infinity, Inc. #49 and #50 (April and May, 1988). 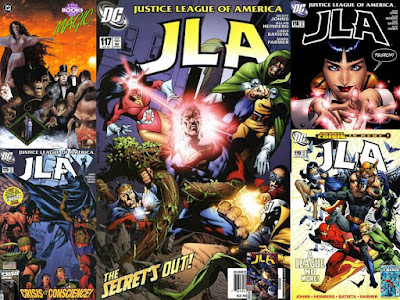 The Wizard then laid low for a time, as his magical power would flucuate... 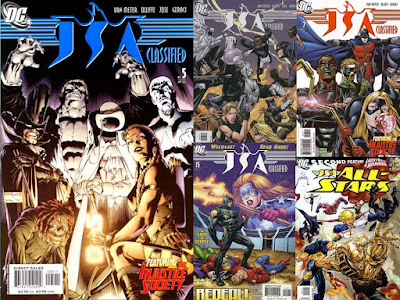 Wizard continues to reform villain teams, forming the Injustice Society of the World again in JSA: Classified #5 to #7 of January to March, 2006, working against the JSA in JSA: Classified #14 to #16 (September and October, 2006) and against another generation of JSAers in JSA: All-Stars #2 to #5 (March to June, 2010).

All of which shows there are more members of the Injustice Society of the World to be covered...and check back as we'll get around to them at some point!