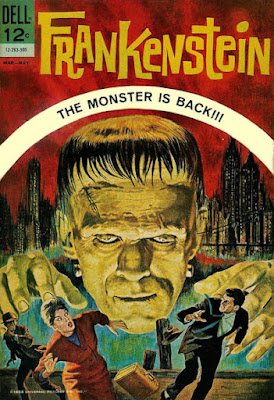 The Universal Monsters saw a bit of an upswing in the 1960s, and Dell was already to cash in on that, with a Frankenstein comic book.

But, Frankenstein #1 (March-May, 1963) wasn't exactly all that it was suppose to be, even though it did sport a painted cover by Vic Prezio, and interior story and art by Don Segall and Bob Jenney. 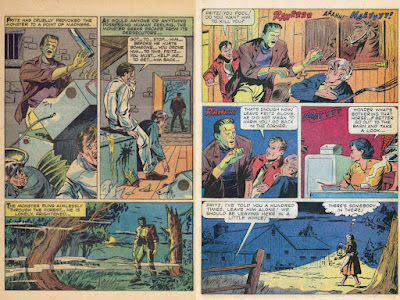 In this story, Dr. Frankenstein created the monster (with an abnormal brain supplied by Fritz, the hunchback), but he later got control of the monster, and fled Europe, taking the monster, whom the doctor had some hypnotic control of to New York, where the monster got loose and was blamed for a fire started by some careless dock workers.... 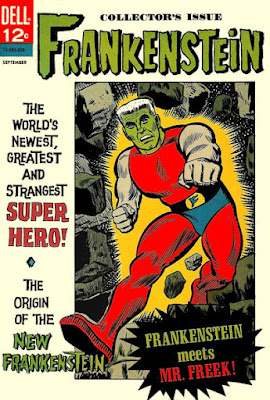 Of course, this was Shakespeare (or at least Shelley) compared to the second through fourth issues of Frankenstein by Dell.

Issue 2 came out in September, 1966, by D. J. Arneson and Tony Tallarico, and now he wasn't a monster, but a super hero!

The monster was created in an old castle in America in the 19th century, and, after 100 years, a city grew around it.  The creature awoke during a lightning storm, and, finding a human mask (to hide his green skin) went out, taking the name "Frank Stone".  He promptly found a billionaire, who died and left him a fortune.  So, Frank then decided to put his great strength to use, becoming a super hero, with his true identity only known by his butler, William, but suspected by his girl friend, Ann Thorpe. 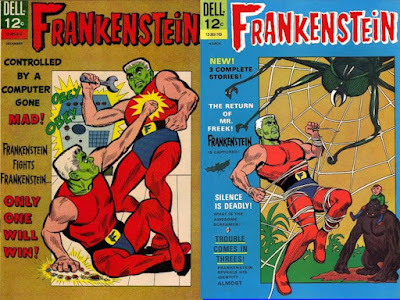 This continued in his third issue from December, 1966, where he fought an evil duplicate of himself, and the fourth from March, 1967, where he faced the return of a nemesis from the second issue, the diminutive Dr. Freek, who had an assistant of his own, the brutish gorilla Bruto.

Oh, what brave heroes this Dell world must have! 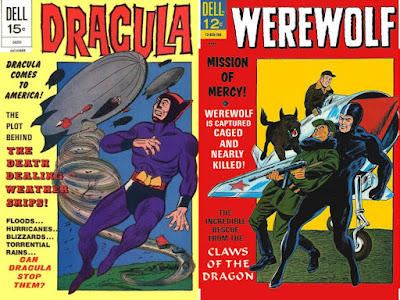 Of course, two other heroes in this were Dracula and the Werewolf, who had equally short comic runs, but more on them later (maybe...or not).

Posted by Dave's Not Here Comic Blog at 4:11 PM