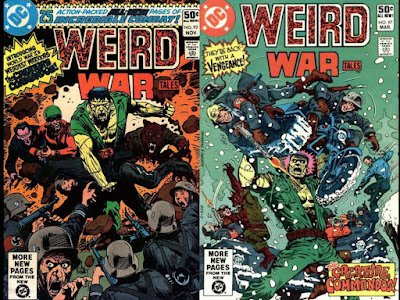 What happens when you take a vampire, a werewolf and a reanimated man, force them to live and work together, and see what type of friendships develop as they get real?

This isn't a reality show, this is World War II, with a battle hardened Lieutenant gathering together 3 men, who have been scientifically altered into horror architypes, who will fight evil as....

Here is a look at their first two adventures! 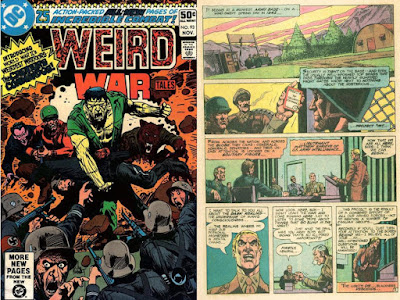 Starting at a secret briefing, with Lt. Matthew Shrieve of U.S. Army Intelligence, as he addresses an audience of distinguished generals, admirals and senators... 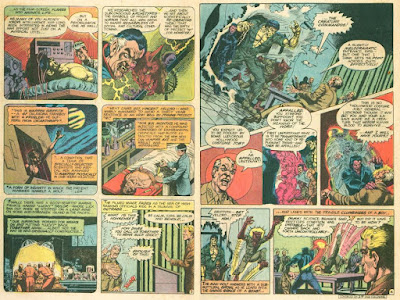 ...about the dark realm, and things which influence men on a basic level....monsters!  Using Project M (for Monster), scientists were able to take three military men...Warren Griffith, a 4F Oklahoma farmboy who thought he could turn into a wolf, which they induced a real transformation into a werewolf (though it is unstable in duration)....Sgt. Vincent Velcro who volunteered to avoid a thirty year prison sentence, being injected with the blood of a rare Mexican bat to get his vampiric powers, and marine Private "Lucky" Taylor, who was blown to bits in a battle on a Pacific island, only to be put back together as an enormous creature, reanimated to life, but without a voice to express his gentle soul.  These three then surprised the room, with a general declaring them the worst monsters he's ever seen, and to sent them to battle the Nazis immediately. 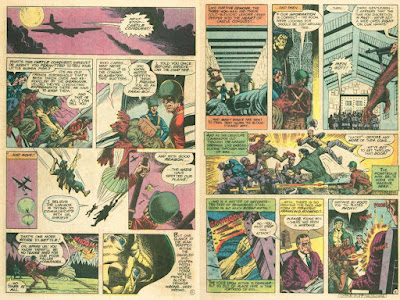 The crew ended up in France, storming Castle Conquest, where the Nazis had been building robots to replace the world leaders.  Shrieve set explosives to destroy the base, which would have gone off if the Creature Commandos had gotten out or not, proving the Lieutenant to be the most heartless monster of them all. 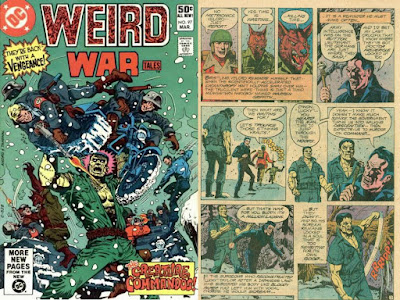 The monster squad and their leader return in Weird War Tales #97 (March, 1981), under a cover by Ross Andru and Romeo Tanghal, with story by J. M DeMatteis and Fred Carrillo.

This time around, the team was sent to retrieve a Doctor Frederique from the Nazis in a storm covered area of occupied France. 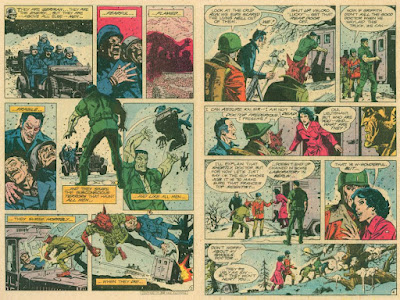 Velcro complained as he took the orders, while Taylor silently went into battle, following the changed Griffith.  The team freed the doctor from the Nazis, finding the doctor to be a she!  Shrieve got to know her, with Frederique worrying about seeing people as people, even the Nazi monsters, as the troop headed for what they thought was safety (facing a few menaces along the way), but as they arrived, the doctor revealed herself as a plant, with this whole mission being a trap to catch the Creature Commandos. 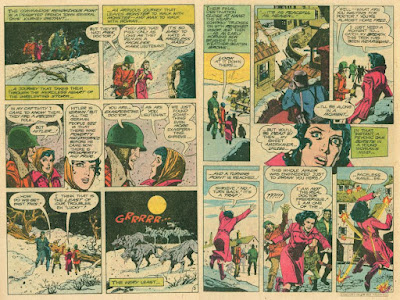 The lady wasn't a doctor, but she died saving the Lieutenant as one of the faceless masses, as the other three decimated the Nazi forces.  When it was over, when asked if they should bury her, as Shrieve seemed to be growing close to her, he declined, as she was only the enemy. 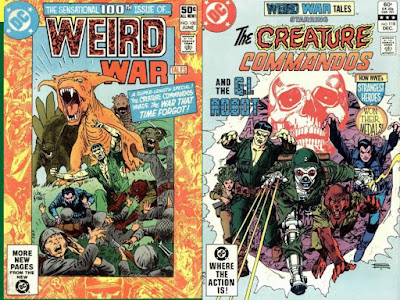 The creatures survived these battles, but more were to be had....and, with luck, to be covered here soon!
Posted by Dave's Not Here Comic Blog at 1:56 PM