Superman Vs. Shazam The Teasers 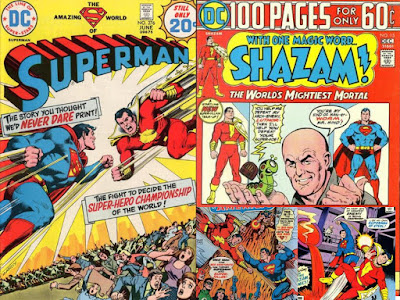 When DC had acquired the original Captain Marvel, one would have immediately thought that a battle between the Big Red Cheese and the Man of Steel would be a no-brainer, but the powers that be at DC didn't feel that way.

So, they spent years setting up near battles between Billy Batson and Clark Kent's alter egos, and told quite a few interesting stories along the way. 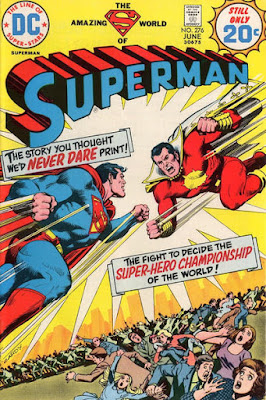 Wait a minute.  This was suppose to be a build up to the Superman/Captain Marvel battle and here Superman #276 (June, 1974) by Elliot S! Maggin, Curt Swan and Bob Oksner seems to give it away already...or does it?  Look closely at that Nick Cardy cover to see if you can spot the difference.....

Yes, that wasn't Captain Marvel, but Captain Thunder, little Willie Fawcett, who accidentally ended up on Superman's Earth and having a little battle with Superman.  Captain Thunder was the prototype for the original Captain Marvel, and DC was shoring up its copyright on this, as well as giving a little taste of what's to come, as well as giving a little taste of other things, like this Cap's own version of Sivana and a Monster League of Evil which looked more like the Universal Monsters than the Monster Society of Evil he usually faced.  There was a battle, but the two parted as friends, with Willie headed to his home dimension... 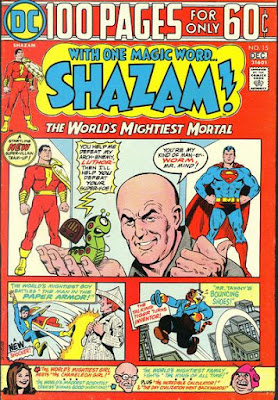 Yes, that seems rather unlikely, but it was the next teaser, in Shazam! #15 (November-December, 1974) by Denny O'Neil, Bob Oksner and Tex Blaisdell, with Superman's foe teaming up with Mr. Mind to cause trouble, all under a Bob Oksner cover.

Luthor figured out a new way to fight Superman with a magic accumulator, but finding a Shazam! comic and being repulsed by it, tried to blast it out of existence, and instead ended up on Captain Marvel's world.  Working with Mr. Mind, the World's Wickedest Worm, the two plotted to use the accumulator against Captain Marvel, and nearly succeeded, if not for Billy's quick wits.  Luthor headed home with his accumulator drained, to face a Man of Steel.   Oddly, this must have had some affect on Luthor, as after this, he kept to his purple and green costume, ditching the grey prison garb he usually wore. 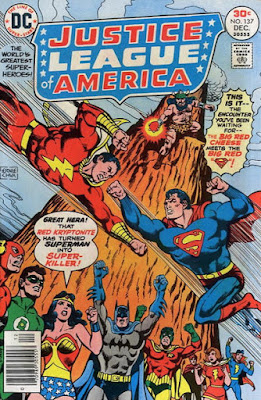 After all this teasing, Justice League of America #137 (December, 1976) by E. Nelson Bridwell, Martin Pasko, Dick Dillin and Frank McLaughlin finally looked like a payoff, but this cover by Ernie Chan was the ultimate tease!

The previous two issues dealt with a team-up of the Justice League of America (from Earth-1), Justice Society of America (from Earth-2) and the Squadron of Justice (from the now named Earth-S), which included other Earth-S heroes of Bulletman, Bulletgirl, Ibis, Spy Smasher, Mr. Scarlet and Pinky, but NOT the Marvel Family.  King Kull, the main villain of the story had incapacitated the old wizard Shazam, so Billy, Mary and Freddy couldn't call down the magic lightning.  Say, you thought they got a little help from this guy and his magical friend, and faster than you can say Shazam!, the Marvel Family was back, though Billy used his wisdom of Solomon to prevent the fight with Superman outside the Rock of Eternity instead.  Holy Moley, was that close! 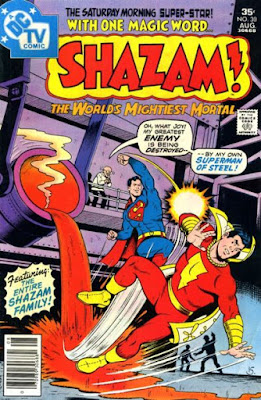 Okay, with the Kurt Schaffenberger cover of Shazam! #30 (July-August, 1977) for the story by E. Nelson Bridwell, Kurt Schafenberger and Vince Coletta, this time it is the real battle, right? 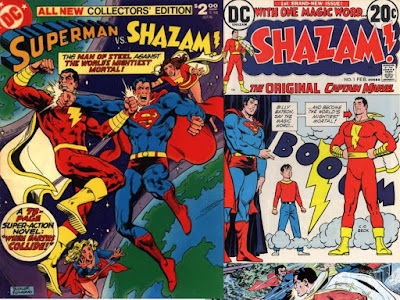 Well, look at Dr. Sivana in the background, as well as the fact that it is a steel mill.  This was at the time Captain Marvel was traveling the country with Uncle Dudley, finding themselves in the steel mills of Pittsburgh, and Sivana found a way to create robots out of the molten steel, including one of Superman, though in the comic, the duplicates were all a grey color (conveniently miscolored on the cover to lure in unsuspecting readers).  Still, it was a battle of Captain Marvel and "the Man of Steel"....just not a real, Kryptonian Man of Steel.


Well, the battle finally happened in All-New Collectors' Edition #C-58 (April, 1978) with "When Earth's Collide", but, in the traditions of the teases that had happened, this will be a story for another day, as they finally fulfilled the promise that the cover of Shazam! #1 (February, 1973) started (or was started nearly a decade before, as artist Kurt Schafenberger snuck the Big Red Cheese into Superman's Girlfriend, Lois Lane #42 (July, 1963) but the colorist hid it by coloring him green, though the reprint of that story in Superman's Girlfriend, Lois Lane #104 (September-October, 1970)...all teases for tales to be told another time!
Posted by Dave's Not Here Comic Blog at 7:59 AM