Green Lantern Green Arrow By Neal Adams For May 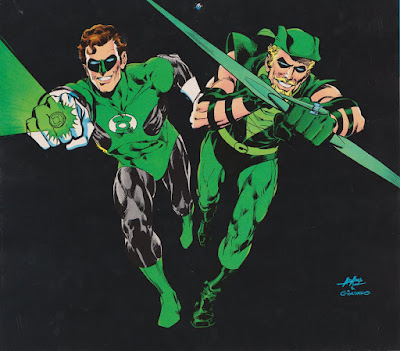 For May, a quick look back at Green Lantern and Green Arrow, as this image from the 1976 Super DC Calendar gives us these hard traveling heroes by Neal Adams and Dick Giordano. 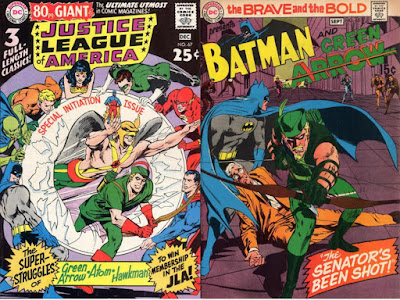 Neal Adams and Dick Giordano were no strangers to Green Lantern and Green Arrow...

...Neal Adams had drawn the two on a few Justice League of America covers in the 1960s, as well as designing Green Arrow's new look for Brave and the Bold #85 (August-September, 1969) in a meeting with Batman.

The two also worked on the art for the 1970s Denny O'Neill written run from Green Lantern #76 to #89, as well as Flash #217 to #219, wherein Green Lantern teamed with Green Arrow, and comics gained a conscious. 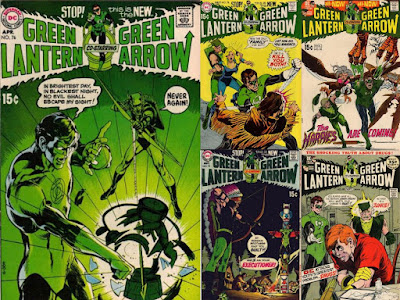 Green Arrow was there to shame Green Lantern into working for his fellow inhabitants of Earth....and, along the way, the recently impoverished Oliver Queen gained Black Canary as a supporting character, lost Speedy while learning about his ward, and even ran for Mayor of Star City for the first time. 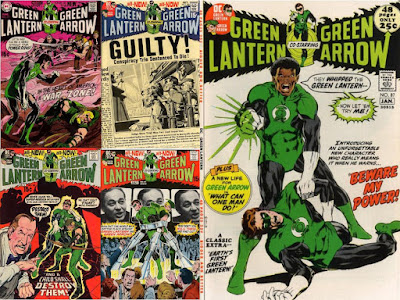 A little underdeveloped, Green Lantern did follow Green Arrow's lead, which resulted in the Guardians of the Universe depowering Hal's Power Ring, and Hal and Ollie traveling the country for a time looking for truth (along with Guardian of the Universe Appa Ali Apsa, himself revealing the humanity of the Guardians, with their problems as well, including overpopulation), and finding some, as well as villains Black Hand and Sinestro (as well as Hal's girlfriend, Carol Ferris), introducing John Stewart as Hal's back-up Green Lantern. 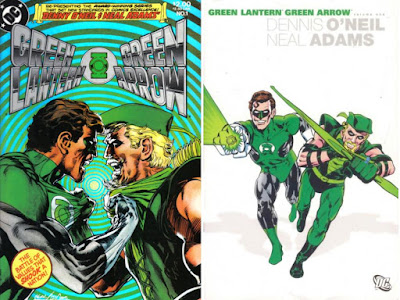 These stories have been reprinted regularly in almost every format since the 1980s....doesn't that one cover look a little familiar?
Posted by Dave's Not Here Comic Blog at 4:00 AM