Giant Batman And His Fantastic Foes 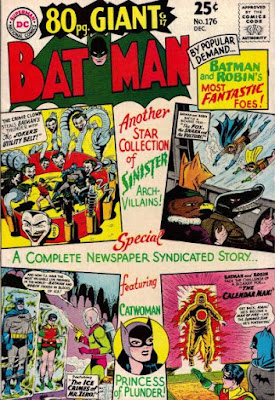 This time around, the focus was on Batman's villains, and at the time, one could almost hear the biffs and the pows coming off the page, as, while this issue, reprinting tales from the 1950s, was in the early days of the "New Look" Batman of the time, as well as coming out soon before the Batman TV series of the 1960s hit the airwaves!

Take a look at the villains involved in the issue, and you can see how these stories influenced those who made the TV show... 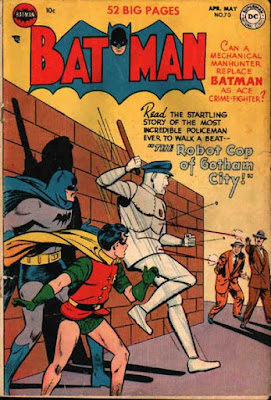 First up is "The Parasols Of Plunder", that originally appeared in Batman #70 (April-May, 1952) by Bill Woolfolk, Bob Kane, Lew Schwartz and Charles Paris, featuring the Penguin, even if the fowl menace wasn't important enough to make the Win Mortimer cover!

Penguin is released from the penitentiary by the parole board, provided he gives up his pursuit of birds.  Penguin does, instead focusing his energy on the manufacture of umbrellas, and trying to get Batman to endorse his business.  Batman, rightfully, thinks the Penguin is up to no good, proven by how he used the manufactured umbrellas in crimes, first on a rainy street in Gotham, then on the sandy beaches....but, the felonious fowl was brought down by the Dynamic Duo, and returned to work on the umbrella line back at Gotham Penitentiary. 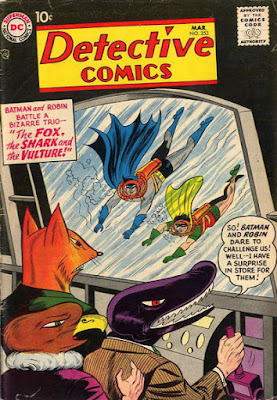 Next up is "The Fox, The Shark And The Vulture", otherwise known as the Terrible Trio, from Detective Comics #253 (March, 1958) by Dave Wood, Sheldon Moldoff and Charles Paris, all originally under a cover by Sheldon Moldoff.

The Terrible Trio used a Burrow Machine, an Underseas Eel submarine and a Pilot Fish jumper to rob banks and museums in Gotham for their booty, controlling land, sea and air, all from the relative safety of their lighthouse base, at least until Batman and Robin got their act together, and found a way to foil the masked criminals with thinking, instead of just trying to follow the false trails they would lead the heroes on.

These three would return again, in Detective Comics #321 (November, 1963), but seemed to be villains based on a gimmick, which would serve the producers of the Batman TV show well (even if these three never appeared there). 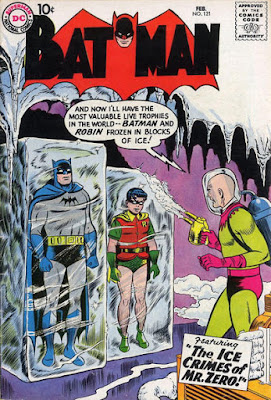 "The Ice Crimes Of Mr. Zero" came from Batman #121 (February, 1959) by Dave Wood, Sheldon Moldoff and Charles Paris, covered by Curt Swan and Stan Kaye, but, the cold criminal who premiered here would only go by this name once, he would later return as Mr. Freeze.

Mr. Zero used a cold-producing gun to commit crimes in Gotham with his henchmen, wearing a special suit and living in a climate controlled headquarters in the mountains, due to having been exposed to a freezing solution which enables him to survive only in sub-arctic temperatures.  After a few attempts at catching the ice gun welding villain, Batman and Robin did catch him after he took them to his headquarters, exposing him to a steam bath, which, for the moment, had appeared to cure Mr. Zero (but, his return as Mr. Freeze froze any hopes of his recovery....). 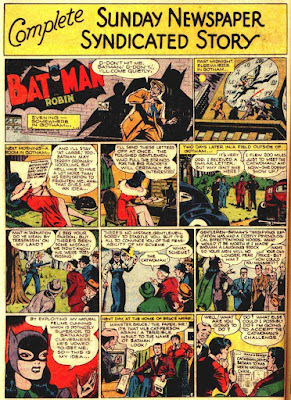 Now, for something completely different, a run from the Batman Sunday Newspaper (April 4, 1946 to June 16, 1946) by Alvin Schwartz, Jack Burnley, Fred Ray and Win Mortimer, featuring the Catwoman as a villain.

Catwoman recruited a new gang, to challenge Batman to a cross-country race, going by planes, trains and automobiles....and even by boat!  This was a game of showmanship, with Batman and Catwoman competing in games of disguise as well, matching wits and occasional confrontations, at least until Batman netted the Catwoman and her crew, ending this particular round of their ongoing game of cat...and bat! 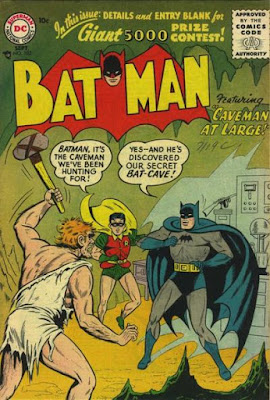 Regressing a bit, Batman and Robin had to deal with "The Caveman At Large" from Batman #102 (September, 1956) by Bill Finger, Sheldon Moldoff and Charles Paris.

Goth was really an actor, Carlin, who really threw himself into his roles....at least until a konk on the head had him thinking he really was a caveman!  Goth was a menace as much to himself as he was to Gotham, so Batman and Robin had to find him for his own good.  Goth found a secret entrance to the Bat-Cave, and, while able to capture Batman and Robin, was stunned by the trophies Batman had their (specifically the T. Rex), at least long enough for Batman and Robin to capture him, where he received another blow to the head, rendering him unconscious, so that the Dynamic Duo could take him up to Wayne Manor, where he revived, with no memory that he had even been in the Bat-Cave (or any other of his time as a caveman). 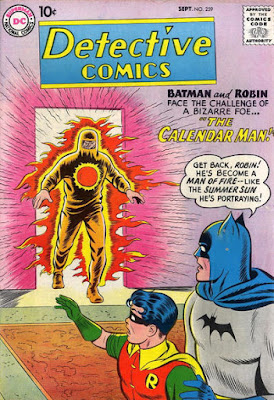 Next up is "The Challenge Of The Calendar Man" from Detective Comics #259 (September, 1958) by David Vern, Dick Sprang and Charles Paris, under a cover by Curt Swan and Stan Kaye.

The Calendar Man challenged him to catch him as the villain would commit crimes based on the five seasons...Spring, Summer, Autumn, and Winter...and, wait...five?  While the Calendar Man was successful using his gimmicks in the four crimes set to the known seasons, it was his conceit in advertising that brought him down, as Batman figured out what the fifth season was, and was able to capture the crook before he was able to act, as the Calendar Man was using a cover identity as the Maharajah the Magician (who was only in town for five days), thus putting prison time into the seasons for Calendar Man.

Calendar Man would return, on his own, and working with other time related villains, such as the Time Foes, including Chronos and Clock King. 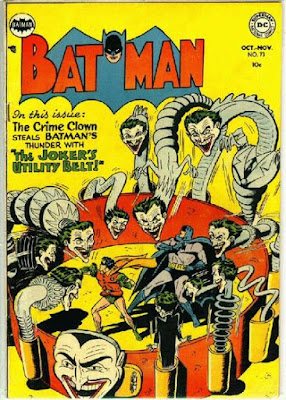 Last, but certainly not least, is the reprint of Batman #73 (October-November, 1952) by David Vern, Dick Sprang and Charles Paris, entitled "The Joker's Utility Belt" (a concept they also used on the 1966 Batman TV Show!).

The Joker, tired of being shown up by Batman with his utility belt, came up with one of his own.  True, his choices of weapons were odd (hand buzzers, snake pellets, sneezing and itching powder capsules, Mexican jumping beans, playing cards, and a cork), the sheer oddity of items allowed Joker to capture Batman and Robin, and, then, using Joker's belt's items, Batman was able to save Robin from rolling into the flames of death on a conveyor belt, capturing the Joker and his gang. 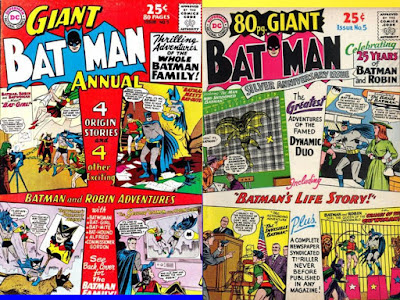 This being the first of many 80 Page Giants within Batman's own book, but it had been preceded by 7 Batman Annuals (starting with the first) and 2 80 Page Giants (#5 and #12) as well, all usually built around some theme!