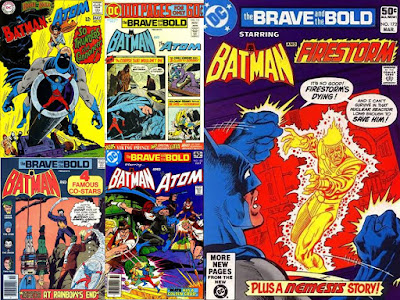 Batman met the atomic age well, and worked with a few heroes involved with atoms and nuclear power, specifically his fellow Justice League of America members, the Atom and Firestorm, in the pages of Brave and the Bold.

When Batman met them, they were already beginning to be legends in the DC Universe, but the team-ups still proved to be fresh and interesting.... 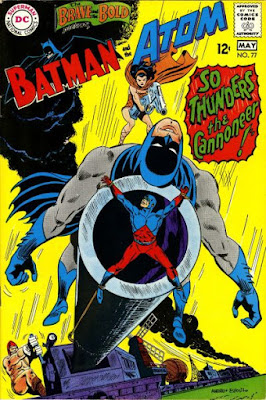 Batman first met with Atom in B&B with Brave and the Bold #77 (April-May, 1968), with "So Thunders The Cannoneer!" by Bob Haney, Ross Andru and Mike Esposito, with the Darknight Detective and the Mighty Mite facing off against the Cannoneer (a human cannonball) and Lilli De La Pooche (his midget assistant) as they plot to rob the Brotherhood Express train (packed with artistic treasures, passing through Gotham City).  Batman faces off against the Cannoneer while Atom deals with Lilli, eventually prevailing and getting the art back.


This story has only been reprinted in black and white, in Showcase Presents the Brave and the Bold Batman Team-Ups #1 of 2007. 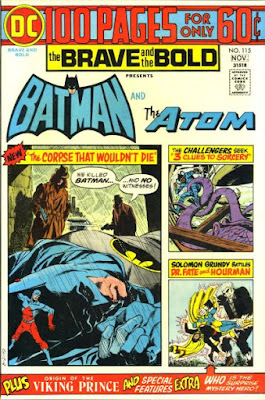 Batman was "The Corpse That Wouldn't Die" in Brave and the Bold #115 (October-November, 1974) by Bob Haney and Jim Aparo.  Batman was fatally wounded while searching for Debbie Manton, and Atom is called in to stimulate Batman's body, and continue the hunt to find the kidnapped girl.  While keeping Batman's body moving, Batman's brain also is stimulated, eventually restoring the Gotham Guardian to life.

This story has been reprinted in black and white, in Showcase Presents the Brave and the Bold Batman Team-Ups #3 of 2008, as well as in color in Batman: The Strange Deaths Of Batman of 2009 and in the Legends Of The Dark Knight: Jim Aparo Volume 1 of 2012. 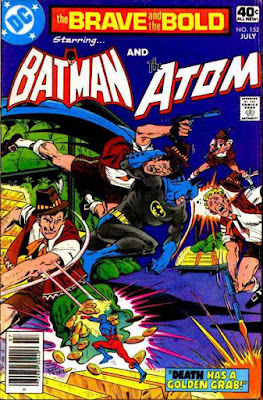 Batman's next solo team-up with the Atom is in Brave and the Bold #152 (July, 1979) with "Death Has A Golden Grab" by Bob Haney and Jim Aparo, with Bruce Wayne and Ray Palmer finding themselves labeled as criminals due to a computer mix up, which puts their alter egos on the chase across the country to find out the hackers behind this problem.


This tale should be reprinted in the Legends Of The Dark Knight: Jim Aparo Volume 3 of 2016, though it appears computer hackers have messed with the various listings of this online, as descriptions of this volume have the book starting with Brave and the Bold #151, and not containing #152 (though it appears #151 was in Volume 2, with a team-up with the Flash, which has been covered here). 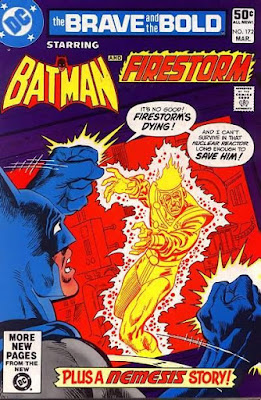 Batman moved on from the Atom and the 1970s, and had his only B&B team-up with Firestorm in Brave and the Bold #172 (March, 1981) with "Darkness and Dark Fire", by Gerry Conway, Carmine Infantino and Steve Mitchell (under a cover by Jim Aparo, at least).  This tale, written by Firestorm's co-creator, has Batman being called in by the Justice League facing off against Firestorm (a relative rookie in the JLA at this time), who has been taken over by the nuclear reactor that gave him his powers, and Batman has to play detective to find out why Firestorm is a menace, then free his nuclear powered friend.


This tale has been reprinted, in the Tales Of Batman: Carmine Infantino book of 2014, though sadly, the Nemesis back-up contained in the book has not (and that series cries for collection!). 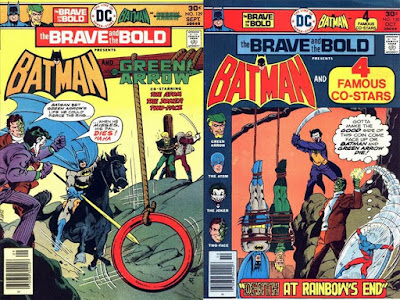 With all this excitement, almost missed Brave and the Bold #129 and #130 (September and October, 1976), but Atom was one of a few co-stars there, along with the Joker, Two-Face and Green Arrow....and Green Arrow team-ups with Batman (including this one) have been covered here.....so, go back there to read more on these, and we'll B&B seeing you soon!
Posted by Dave's Not Here Comic Blog at 4:37 AM