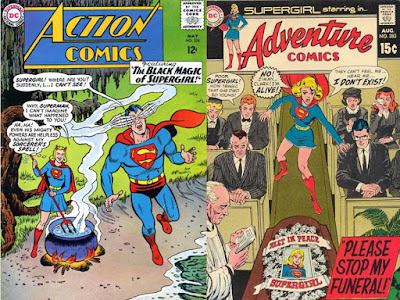 Supergirl, like all Kryptonians, is vulnerable to magic, but it seemed over the early years of her career, to not face too many magical threats.


Here's a few of the most interesting tales from the 1960s (and they also lean towards the theory that magic is just an unexplained science.....).


The Black Magic Of Supergirl 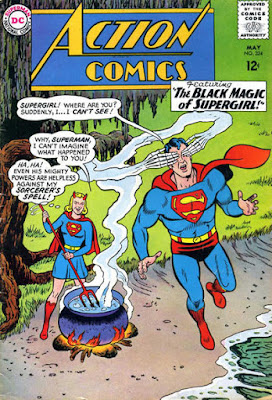 In Action Comics #324 (May, 1965) by Leo Dorfman and Jim Mooney, Supergirl gets a magic ring from a magician named Abdul, who says he was dying from a snake bit.  Abdul reveals to Supergirl he was also a demon, and that using the magic powers of the ring will turn its owner into a demon.  Of course, after Supergirl returns to her home, emergencies arise which force her to use the ring 3 times....and, true to the warnings, Supergirl becomes a demon!  Disturbed by her new evil leanings, Supergirl returns to the bazaar that she got the ring at, only to find Abdul alive, with no memory of his past.  Supergirl finds that she needs to be purified by fire to be rid of the demon, and tries flying through lava and to the sun....but only finally being able to rid herself of the curse when she finds the remains of the Kryptonian Firefalls, which have also been turned into Kryptonite....and that heat frees her and melts the ring. 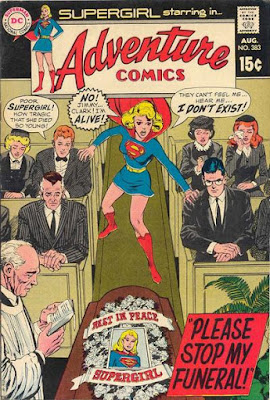 Supergirl has another brush with the supernatural in Adventure Comics #383 (August, 1969) by Robert Kanigher, Win Mortimer and Murphy Anderson, wherein she attends her own funeral after saving the Apollo 15 spacecraft from a UFO that explodes, catching the Girl of Steel in its wake!  Supergirl encounters Clark Kent, Jimmy Olsen, Lois Lane, Perry White, Fred and Edna Danvers, Batman and Robin, Streaky and Comet....and is unable to communicate with any of them.  Oddly, Supergirl does find an active Abraham Lincoln, Joan of Arc and Sir Isaac Newton, and while helping Newton, is hit by a rocket fired by him....and is sent back to her own world (realizing somehow that she had been sent into an alternate world, where the dead still existed after death and could interact with each other, but not the living!).  She knew she was home when she went to talk to Clark.

This story has not been reprinted as of yet. 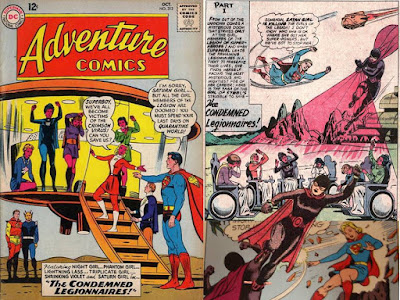 As a little bonus, a look at Adventure Comics #313 (October, 1963) by Edmond Hamilton, Curt Swan and George Klein, with Supergirl having an adventure with the Legion of the Super-Heroes in the 30th Century.  Supergirl, like her cousin, Superboy (Superman when he was a boy), was a member of this future teen super-group, and was called in when all the female Legionnaires (Saturn Girl, Lightning Lass, Shrinking Violet and Triplicate Girl) suddenly fell to a Crimson Virus...and it even affected Legion of Substitute Heroine, Night Girl! 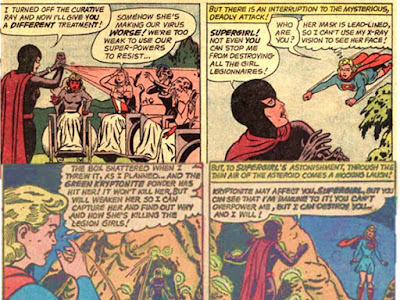 Satan Girl showed up at this time, trying to join the Legion, due to its depleted ranks, seeming to possess all the powers of Kryptonians.  Satan Girl then takes credit for the girls' illness, and Supergirl goes after her to stop her while the men of the Legion try to save the girls.  Supergirl tries to stop Satan Girl, even using Kryptonite against her....all to no avail, and only defeats the evil vixen with the help of the Legion of Super-Pets (Krypto the Super-Dog, Streaky the Super-Cat, Beppo the Super-Monkey and Comet the Super-Horse).  Unmasking Satan Girl reveals her to be an evil duplicate of Supergirl, created by Red Kryptonite (and the duplicate wanted to survive past the 48 hours it usually takes for Red K effects to disappear, so was siphoning off the Red K into the Legion females).  Defeated, the time expires, with Satan Girl being reabsorbed by Supergirl and the Legion girls recovering.
Posted by Dave's Not Here Comic Blog at 7:02 AM