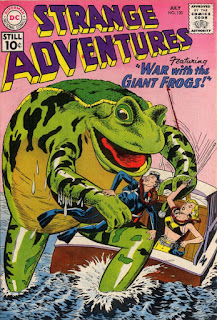 Think Ray Milland and Sam Elliott had it bad?  Well, at least he didn't have to face off against GIANT frogs!

Here's the story of that little strange adventure from Strange Adventures #130 (July, 1961) by Gardner Fox and Sid Greene, all under a ribbiting cover by Sid Greene!

War With The Giant Frogs! 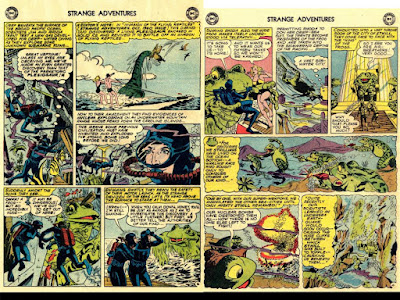 The story starts off with scientists Jim and Rhoda Trent, who are doing a little underwater exploring with their new experimental scuba gear in the Pacific Ocean, where they find the remains of an ancient advanced civilization, destroyed by atomic war.  Oh...and a giant frog, who follows them to the surface!  They return to tell their fellow scientists (while, Thaxt, the giant frog, tells his people of his discovery of the humans to the forces of the city of Sthill).  Both the Trents and Thaxt return to the spot of the original encounter, where Thaxt takes the duo to his city.  In Sthill, the leader explains how his race destroyed their society with a nuclear war, with this batch of frogs surviving in their now domed city. 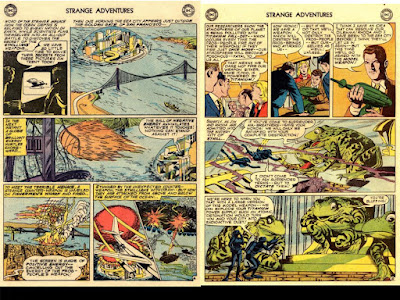 With the discovery of humans, the frogs plan to return to the surface and conquer the humans with their advanced weaponry.  The frogs attack humanity from their mobile city, causing much destruction, until the Trents figure out their weapons are powered by titanium, and, using some experimental science, demonstrate to the frogs that they can explosively destroy their power source, which convinces the frogs to go back to the depths of the sea (with the Trents knowing they couldn't release the full power of their weapon against the frogs, for fear of destroying the Earth, making this the second time the Trents saved Earth, with the first being in an earlier strange adventure against dinosaurs, but that will be covered later!).