Batman Around The Globe 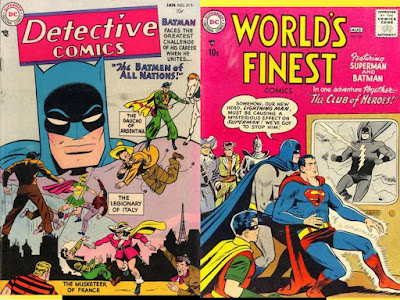 Batman was an incredible force in fighting crime in Gotham...but what about the rest of the world?

Well, inspired by the Batman, various other people across the globe took to wearing costumes and fighting crime in their own countries as well.

Here are their stories.

The Batmen Of Many Nations 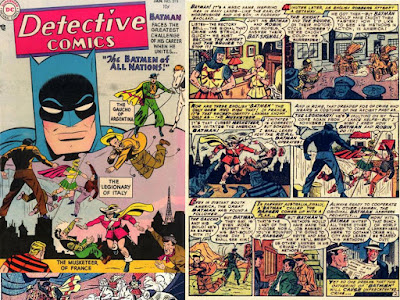 It all started in Detective Comics #215 (January, 1955) by Edmond Hamilton, Sheldon Moldoff and Charles Paris, when international heroes came to Gotham to meet their hero, Batman (including the Knight and Squire of England who first appeared in Batman #62, as well as the introductions of the Musketeer from France, the Legionary from Italy, the Gaucho from Argentina and the Ranger from Australia). 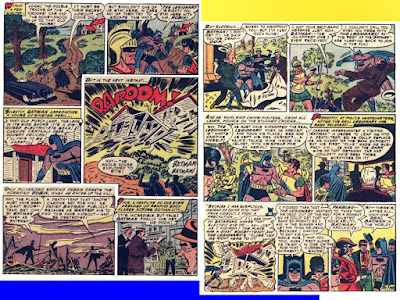 These heroes would then help Batman against Knots Cardine, a gang leader, who had escaped from Batman.  During the course of the case, it appears Batman was killed, and Robin and the Batmen go to catch the killer, where they find Batman and Knots, who had taken the place of the Legionary, thus having Batman come up with the plan to fake his death to isolate the hood.

The Club Of Heroes 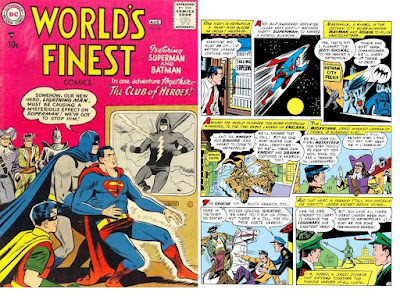 The international heroes gathered again in World's Finest Comics #89 (July-August, 1957), by Edmond Hamilton, Dick Sprang and Stan Kaye, under a Curt Swan/Stan Kaye cover, where the heroes would get a headquarters thanks to philanthropist John Mayhew...if they could select a chairman, which they choose to do by whomever is the most successful this week. 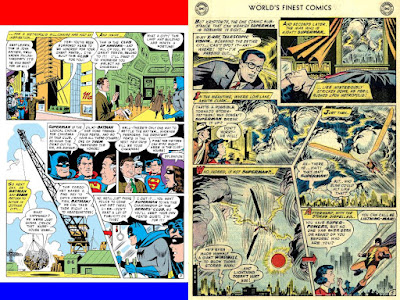 All the Batmen (except the Ranger, who sat this issue out) are in contention for this, as is Superman, but Superman seems to fail, needing rescue by Lightning-Man, who accomplishes the feats Superman couldn't.  Lightning-Man does succeed in winning the chairmanship, but doesn't....as Batman exposes Lightning-Man as Superman, given a split personality by an orbiting Kryptonite meteor!  Since Superman technically won, he keeps the chairman seat.

Remember, these heroes all met years before the Justice League of America fought Starro! 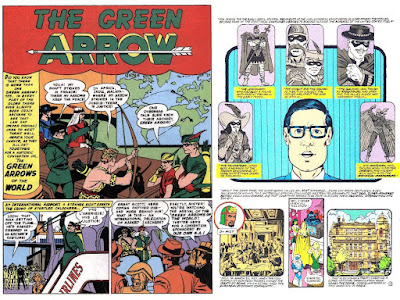 Now, Green Arrow had his own version of these heroes in "The Green Arrows Of The World" in Adventure Comics #250 (July, 1958) by Bill Finger and Jack Kirby, but they didn't appear again in the 20th century, and Roy Thomas and Todd McFarlane revived the Batmen Of Many Nations as the inspiration for the Global Guardians in Infinity, Inc. #34 (January, 1987), adding the Wingman to their ranks, having them work for Doctor Mist. 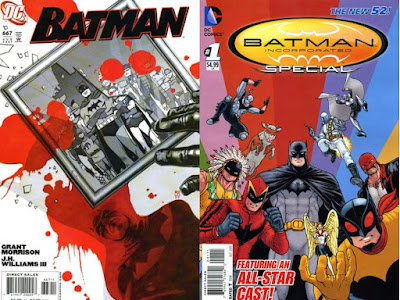 Grant Morrison revived them in Batman #667 (August, 2007), and had them return under a Batman, Incorporated title, adding many more members to the group, as well as fleshing out the characters that were already there!