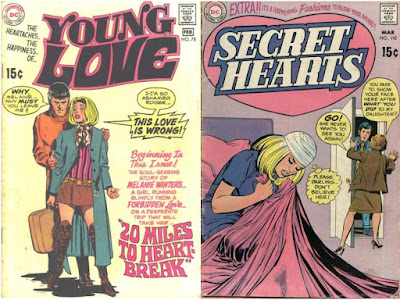 One doesn't think of reoccurring characters in romance comics, nor of stories that crossover titles, but, for the trials and tribulations of young socialite Melanie Winters, and her ill fated romance with Juan Ricco/Perez, as told by Barbara Friedlander, Alex Toth and Vince Colletta....it took four issues in two titles to tell the story of "20 Miles To Heartbreak"!

Here are the covers mostly by Dick Giordano! (with Secret Hearts #141 by Bill Draut and Vince Colletta) 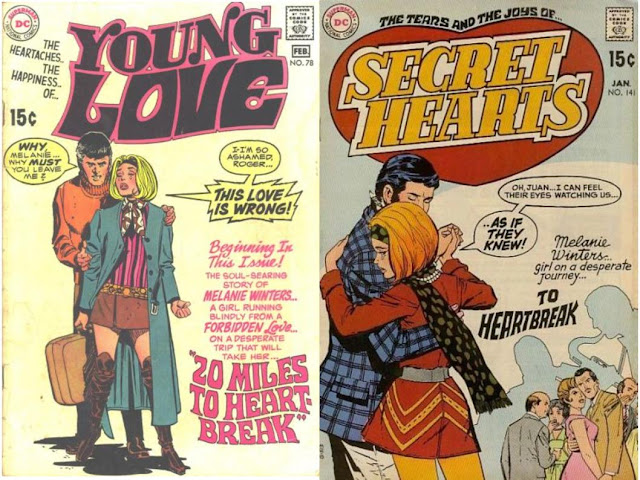 First, Melanie starts her story by secretly being in love with stepfather, and running away from home.  As she flees, she's picked up by Juan, whom people would not approve of (and as a fight breaks out as they dance, she flees again, and is hit by a car!).  Recovering, Melanie finds that Juan was arrested for causing her accident, but Melanie's estranged sister returns, getting Juan freed (to see the shock of Melanie's mom when Melanie hugs Juan).  Then, realizing he is a pawn Melanie is using against her mom, Juan takes off as Melanie's sister announces her own upcoming wedding! 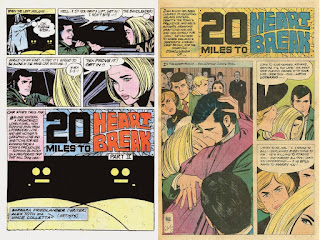 So much drama for eight pages an issue, but great Alex Toth art, even if heavily inked by Vince Colletta (and the four part story is reprinted over Young Love #122 to #125...).

Posted by Dave's Not Here Comic Blog at 7:55 AM